Advertisement - You can get this game from STEAM
Governmental office

Chancellor (Latin: cancellarius) is a title of various official positions in the governments of many nations. The original chancellors were the cancellarii of Roman courts of justice—ushers, who sat at the cancelli or lattice work screens of a basilica or law court, which separated the judge and counsel from the audience. A chancellor's office is called a chancellery or chancery. The word is now used in the titles of many various officers in all kinds of settings (government, education, religion). Nowadays the term is most often used to describe:

Chancellor or Grand Chancellor is the common translation of the Chinese title chengxiang or zaixiang, which in imperial China was the head of the government serving under the emperor. 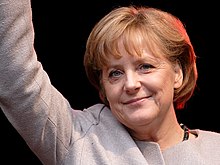 Angela Merkel, the Chancellor of Germany.

The Chancellor of Germany or Bundeskanzler (official German title which means "Federal Chancellor") is the title for the head of government in Germany. Bundeskanzlerin is the exclusively feminine form. In German politics, the Bundeskanzler position is equivalent to that of a prime minister and is elected by the Bundestag ("Federal Diet", the directly elected federal parliament) every four years on the beginning of the electoral period after general elections. Between general elections, the Federal Chancellor (together with the whole cabinet) can only be removed from office by a konstruktives Misstrauensvotum ("constructive motion of no confidence"), which consists in the candidacy of an opposition candidate for the office of Chancellor in the Bundestag. If this candidate gets a majority of the entire membership of the Bundestag, he or she will be sworn in immediately as new Federal Chancellor.[1]

The current German Bundeskanzlerin is Angela Merkel of the Christian Democratic Union (CDU).

The former German Empire, the Weimar Republic and Nazi Germany had the equivalent position of Reichskanzler ("Chancellor of the Reich") as the head of the executive. Between 1871 and 1918, the Chancellor was appointed by the German Emperor. During the Weimar Republic (1919-1933), the Chancellor was chosen by the Reichspräsident and stood under his authority. This continued (formally) during the first two years of the Nazi regime until the death of President Paul von Hindenburg in 1934. Between 1934 and 1945, Adolf Hitler, the dictatorial head of state and government of Nazi Germany, was officially called "Führer und Reichskanzler" (literally "Leader and Chancellor of the Reich").

In Switzerland, the Federal Chancellor (German: Bundeskanzler, French: Chancelier fédéral, Italian: Cancelliere della Confederazione) is not the political head of government, but rather its administrative head as the Chief of Staff of the Swiss Federal Government. He or she is elected by the Swiss Federal Assembly (Assemblée fédérale, Assemblea federale, Assamblea federala, Bundesversammlung) to head the Federal Chancellery (German: Bundeskanzlei) — the general staff of the seven-member executive Federal Council, the Swiss federal government. The Chancellor participates in the meetings of the seven Federal Councilors with a consultative vote and prepares the reports on policy and activities of the council to parliament (assembly). The chancellery is responsible for the publication of all federal laws.

In most Swiss cantons there is a State Chancellor who heads the central administrative unit of the cantonal government. [2] In the Canton of Geneva, the first documents attesting to the existence of a Chancellor go back to the 12th century. In the 16th century the Chancery is officially described as the permanent secretariat of the executive and legislature. The first of these functions still constitutes an important part of its activities in Geneva and other cantons. [3] In the Canton of Berne, the Chancellor is elected by the Grand Council (i.e. Parliament) and has the task of supporting the Grand Council and the Executive Council in carrying out their tasks. The Chancellor directs the staff of the Executive Council, supports the President of the Government and the Executive Council in the performance of their duties, and usually participates as an advisor to the President of the Grand Council in Grand Council sessions. [4]

In Latin America, the equivalents to "chancellor" (Canciller in Spanish and Chanceler in Brazilian Portuguese) are commonly used to refer to the post of foreign minister. It is often used as a synonym to the full titles of the ministers of foreign affairs. Likewise, the ministry of foreign affairs in Spanish-speaking countries in the Americas is referred to as the Cancillería or in Portuguese-speaking Brazil as Chancelaria. However, in Spain the term canciller refers to a civil servant in the Spanish diplomatic service responsible for technical issues relating to foreign affairs. As to the German foreign service, the term Kanzler (chancellor) refers to the administrative head of a diplomatic mission.

Functions related to justice and the law

In Finland the Chancellor of Justice (Oikeuskansleri, Justitiekanslern) supervises the legality of actions taken by the government and monitors the implementation of basic civil liberties. In this special function the chancellor also sits in the Finnish Cabinet, the Finnish Council of State.

In Sweden the Chancellor of Justice or Justitiekanslern acts as the Solicitor General for the Swedish Government. The office was introduced by Charles XII of Sweden in 1713. Historically there was also a Lord High Chancellor or Rikskansler as the most senior member of the Privy Council of Sweden. There is in addition to this a University Chancellor or Universitetskansler, who leads the National Agency for Higher Education.

In the legal system of the United Kingdom, the term can refer to two officials:

Some states in the United States

Some U.S. states, like Delaware, Tennessee, and Mississippi, still maintain a separate Court of Chancery with jurisdiction over equity cases. Judges who sit on those courts are called chancellors.

In Denmark, the office of chancellor (or royal chancellor) seems to have appeared in the 12th century, and until 1660 it was the title of the leader of the state administration (a kind of a "Home Office" but often with foreign political duties). Often he appeared to be the real leader of the government. From 1660 until 1848, the title continued as "Grand Chancellor" or "President of the Danish Chancellery", and was replaced in 1730 by the title "Minister of Domestic Affairs".[7][better source needed]

In Estonia, a Chancellor (Kantsler) directs the work of a ministry and coordinates institutions subject to the ministry. A ministry can also have one or several Vice-Chancellors (Asekantsler), who fulfill the duties of the Chancellor, when he is absent.[8] The Chancellor of Justice (Õiguskantsler, currently Ülle Madise) supervises the legality of actions taken by the government and monitors the implementation of basic civil liberties.[9]

Several posts carry the title of Chancellor in the United Kingdom:

The chancellor is the principal record-keeper of a diocese or eparchy, or their equivalent. The chancellor is a notary, so that he may certify official documents, and often has other duties at the discretion of the bishop of the diocese: he may be in charge of some aspect of finances or of managing the personnel connected with diocesan offices, although his delegated authority cannot extend to vicars of the diocesan bishop, such as vicars general, episcopal vicars or judicial vicars. His office is within the "chancery". Vice-chancellors may be appointed to assist the chancellor in busy chanceries. Normally, the chancellor is a priest or deacon, although in some circumstances a layperson may be appointed to the post.[10] In the eparchial curia a chancellor is to be appointed who is to be a presbyter (priest) or deacon and whose principal obligation, unless otherwise established by the particular law, is to see that the acts of the curia are gathered and arranged as well as preserved in the archives of the eparchial curia.[11]

In England, the Consistory courts of the Church of England are each presided over by a Chancellor of the Diocese.

A chancellor is the leader (either ceremonial or executive) of many public and private universities and related institutions.

The heads of the New York City Department of Education and the District of Columbia Public Schools, who run the municipally-operated public schools in those jurisdictions, carry the title of Chancellor. New York State also has a Chancellor of the University of the State of New York, the body that licenses and regulates all educational and research institutions in the state and many professions (not to be confused with the State University of New York, an actual institution of higher learning).

In a few instances, the term chancellor applies to a student or faculty member in a high school or an institution of higher learning who is either appointed or elected as chancellor to preside on the highest ranking judicial board or tribunal. They handle non-academic matters such as violations of behavior.

In Germany many heads of university administration carry the title Kanzler (Chancellor) while the academical heads carry the title Rektor (Rector). In order to avoid any misunderstanding, the head of the German Federal Government is therefore usually called by the official title Bundeskanzler (Federal Chancellor).