Chamber of Fasces and Corporations 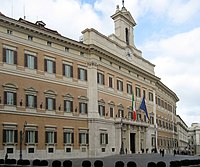 Chamber of Fasces and Corporations (Italian: Camera dei Fasci e delle Corporazioni) was the lower house of the legislature of the Kingdom of Italy from March 23, 1939 to August 2, 1943,[1] during the height of the regime of Benito Mussolini's National Fascist Party.

It was established on January 19, 1939, to replace the Chamber of Deputies during the 30th legislature of Italy. Members of the chamber were called '"national councillors" (consiglieri nazionali) rather than deputies. The councillors of the chamber did not represent geographic constituencies, but the different branches of the trade and industry of Italy, thus reflecting the corporativist idea of fascist ideology.

Councillors were elected for terms of undetermined length and automatically lost their seats upon their defection from the branch they did represent. Renewal of the legislature was ordered by decree by the King of Italy, on specific instruction of the head of government (Mussolini).

The creation of the Chamber of Fasces and Corporations was the culmination of the progressive curtailment of the independence of Parliament following Mussolini's formal proclamation of dictatorship in 1925. At the elections of 1929 and 1934, voters were presented with a single list of Fascist candidates chosen by the Grand Council of Fascism.

No elections took place in Italy between 1934 and 1946. Unlike earlier elections for the legislature held under the Fascist era, popular suffrage was eliminated altogether. Instead, candidates were simply delivered under the pretext of a parliamentary reform, replacing the elections system with a body comprising only candidates of the various corporations of Italy, fulfilling Benito Mussolini's vow of enacting a complete corporativist system.

The candidates for the approximately 600 seats were nominated summarily by three organs: the Grand Council, the National Council of the members of the PNF, and the different corporations resembling the entire trade and industry of Italy, canalized through the National Council of Corporations (Consiglio Nazionale delle Corporazioni), effectively in the hands of Mussolini and the PNF.