Chacao is one of the five political and administrative subdivisions of the city of Caracas, Venezuela. The other four are Baruta, El Hatillo, Libertador and Sucre. This legal entity is known as the Caracas Metropolitan District. Chacao is also one of the 21 municipalities that make up the State of Miranda, Venezuela.

Chacao occupies the mid-eastern portion of the Caracas Valley, north of the Guaire River, bordering the other urban municipalities to the east, south and west, and the Avila National Park to the north. 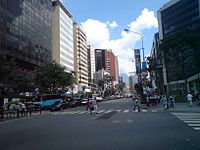 Chacao, along with Baruta and the Salias, is one of the communities with the least poverty in Venezuela, with a poverty rate of only 4.67% according to the 2011 census. It is home to some of the city's major financial and commercial centers, such as the Center City Commercial Tamanaco (CCCT), Sambil Shopping Mall, Centro Lido, San Ignacio, and El Recreo Mall La Castellana, as well as branches of major local banks, and foreign institutions, stock exchanges, the most luxurious hotels in the city, and the mansions of recognized personalities in the political and economic sphere.

Many of the city's shopping malls are located within Chacao's borders. The township also controls the most transited pedestrian access to the Avila National Park (Sabas Nieves), a popular destination for caraqueños. Other attractions include a restaurant district in the neighborhoods of La Castellana, Altamira and Los Palos Grandes, a Center for Performing Arts (CELARG) and the Chacao Culture Center, a public space dedicated to concerts, art expositions, and other cultural activities. Parque del Este, the biggest urban park in Caracas, although largely in neighboring Sucre territory, has one of its main entrances in Chacao, making it a popular recreational and exercise area for the inhabitants of Los Palos Grandes and other Chacao neighborhoods.

The traditional Venezuelan private sector has given way to new short-term businesses and franchises that bloom around the city thanks in part to soaring oil prices. Chacao is again an important player in this money wave craze, with commercial and residential real estate prices among the highest in the nation. The residential neighborhood of Campo Alegre has on average the highest priced real estate in the country.

The headquarters of Estalar Airlines is in Altamira, Chacao.[1]

The Cathedral and Bolivar Square area, known as Pueblo de Chacao was home to Spanish, Italian and Portuguese immigrant waves, and today represents a middle class stronghold in the municipality. Small pockets of poverty, known as barrios, are also present, some of the best known are Pajaritos and El Pedregal which are surrounded by luxury condos and opulent houses.

Former mayor Leopoldo López Mendoza, elected in 2000 and re-elected for the 2004-2008 term, has played a prominent role in anti-Chávez politics over the past eight years. On November 23, 2008, Emilio Graterón was elected mayor with 47,54% of vote.[2] Chacao has represented a stronghold for the Venezuelan opposition. Anti-Chavez votes have steadily represented between 85 and 95% of the total votes in the borough, throughout the length of Chavez's administration.

Chacaito at the end of the 19th century

In Cumanagoto language Chakau (Chacao) means sand, the municipality was named after the Indian Cacique Chacao, who died defending his territory in 1567, the year when the city of Santiago de León de Caracas was finally established after more than three decades of unsuccessful attempts by the Spanish. The chosen location for Caracas Plaza Mayor and Cathedral was on the west side of the valley, making the fertile lands of Chacao (on the mid-east side) an ideal location for agricultural crops and establishment of haciendas. Spanish conquistador Diego de Losada, founder of the city of Caracas, included these lands in his jurisdiction.

The township of Chacao was founded by an immigration wave of the San Bernabé earthquake victims on June 11, 1641. It was officially made a Catholic parish with the foundation of San José de Chacao church.

After repeated epidemics and calamities affected Caracas, the Town Hall and the Governor and Commander in chief of the Province, Jose Solano y Bote, in 1764 thought about transferring the entire city to this location, an idea that was rejected by Caracas Bishop Mauro Tovar.

On April 15, 1769, the residents of Chacao asked for the creation of an independent ecclesiastical parish, Lieutenant Francisco Palacios y Sojo made the request, after evaluating the economic conditions. The final separation of Chacao from the Parish of La Candelaria was granted on September 27, 1769.