Châteauguay (English: /ˈʃætoʊɡeɪ/ SHAT-oh-gay,[6] French: [ʃɑtoɡɛ], locally [-ɡe]) is an off-island suburb of Montreal, in southwestern Quebec, located both on the Chateauguay River and Lac St-Louis, which is a section of the St. Lawrence River. The population of the city of Châteauguay at the 2011 Census was 45,904, and the population centre was 70,812.[4][5]

Church of Saint-Joachim, a National Historic Site of Canada

The land was first given to Charles Lemoyne by the governor of New France at the time, the Comte de Frontenac with the intention of setting up a seigneurie in the area. Afterwards the seigneurie was assumed by Zacharie Robutel de la Noue in 1706. In 1763 France relinquished its claims in Canada and Châteauguay was now under British mandate. The seigneurie was bought by Marguerite d'Youville, a founder of the Quebec religious society the Grey Nuns in 1765 and 10 years later construction began on the Church of Saint-Joachim.

Châteauguay played an important part in the colonial history of North America. With the United States having declared war on Britain in 1812, Châteauguay was seen as little more than a good vantage point to post troops to defend Montreal against an invasion. This prong of the American advance on Montreal ended with the Battle of the Châteauguay, where on October 26, 1813, Lieutenant Colonel Charles de Salaberry succeeded in halting the American force of 4,000 advancing on Montreal with only some 400 troops, mostly French-Canadian and 170 Kahnawake Mohawk warriors. The second American incursion towards Montreal was defeated shortly after at Crysler's Farm on November 11.

During the Lower Canada Rebellion, Châteauguay was the scene of a notable action involving Les Patriotes. In November 1838, members of the French-Canadian rebel group, including the leaders of the rebels were arrested: François-Maurice Lepailleur, who was later exiled to Australia, and two natives of Châteauguay, Joseph Duquet and Joseph-Narcisse Cardinal, both of whom were later hanged at the prison at Au-pied-du-courant and subsequently interred beneath a monument to les Patriotes at Notre Dame des Neiges cemetery in Montreal.

The actual village of Châteauguay was created in 1855, after the abolition of the seigneurie system in Quebec by the United Province of Canada.[1] #Later on the city annexed two neighboring districts, Châteauguay-Heights (1968) and Châteauguay-Centre (1975). In 1982, with the passage of the Loi sur l'aménagement et l'urbanisme, Québec, the city became part of the Roussillon Regional County Municipality.

Châteauguay has traditionally had one of the highest proportions of English speakers in the Montérégie region. As according to the 2011 census, The prominent languages primarily spoken at home by their relative share of the population are French (60%), English (30%) and Spanish (2%).[11]

Twelve different ethnic groups represent at least 1% of the population in Chateauguay. The most prominent of them according to the 2006 census and their relative share are Canadian (56%), French (29%), Irish (12%), English (10%), and Scottish (9%)

Châteauguay holds the highest percentage, outside of the Island of Montreal, of Black population in Quebec, which is mostly concentrated in the easternmost part of the city. 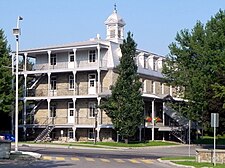 The current mayor of Châteauguay is Pierre-Paul Routhier.

The Châteauguay Police have more than 130 police officers. Their duties include investigations, crime prevention and routine city patrols. The force also participates in many community efforts. The majority of these outreach programs are aimed at Châteauguay youth and focus on the prevention of drug and alcohol use which is widespread among the youth (up to 78% of the teens have used a drug on the course of last month according to a survey). The force, originally having only jurisdiction within the city limits expanded its jurisdiction over the nearby cities of Léry, Mercier, Beauharnois and Saint-Isidore between 2002 and 2007 through agreements between the municipalities.

Public transportation is assured by CITSO (Conseil Intermunicipal de Transport du Sud-Ouest). They run two Châteauguay-Angrignon loop bus routes circulating in opposite directions. A city minibus transfers commuters from the western part of the suburb to the downtown, where the other off-peak routes pass. During rush hours, more bus routes connect the various neighbourhoods with the Angrignon bus terminal and metro station. A special express bus route connects western Châteauguay and the Châteauguay Park-and-ride with downtown Montreal, only during rush hours. A reserved lane on Highway 138 eastbound makes the connection significantly faster when the Mercier Bridge is congested. The Châteauguay public transit system also offers a Taxi-Bus service which allows those people who live outside of the normal bus routes to, by way of transfer, use a taxi funded by CITSO to drop them off at specific points in the city usually within walking distance of their residence.

Since 1984, Châteauguay has been home to one of the largest HVDC-back-to-back stations in the world with an operating voltage of 140 kV and a maximum transmission rate of 1000 MW.

The majority of the education institutions within Châteauguay are public, with the exception of Collège Héritage. A small list of Châteauguay schools includes:

NOVA Career Centre for adult students recently established itself in a building adjacent to Howard S. Billings. It was previously located in the school building.

During the 1980s, three English elementary schools became French due to a demographic shift:

The city's local newspaper is Le Soleil (The Sun). Châteauguay Express was shut down in 2014.