The Cessna 208 Caravan is a utility aircraft produced by Cessna. The project was commenced on November 20, 1981, and the prototype first flew on December 9, 1982. The production model was certified by the FAA in October 1984 and its Cargomaster freighter variant was developed for FedEx. The 4 ft (1.2 m) longer 208B Super Cargomaster first flew in 1986 and was developed into the passenger 208B Grand Caravan.

On November 20, 1981, the project was given a go-ahead by Cessna for its Pawnee engineering facility. John Berwick, chief engineer at Pawnee, came with a concept of a single engine, high-wing airplane with a large payload. Berwick had originally approached VP Bill Boettger[who?] with the idea and once Dwane Wallace approved it, Berwick told Russ Meyer he would design it.[3]

The prototype first flew on December 9, 1982.[4] The production model was certified by the Federal Aviation Administration (FAA) in October 1984.[5] A freighter variant without cabin windows was developed at the request of Federal Express as the Cargomaster.[5] Another cargo variant for Federal Express, with a longer fuselage and a cargo pod under the belly, was developed as the 208B Super Cargomaster and flew for the first time in 1986.[5] FedEx was initially planning to build twin-engine piston-powered airplanes with Piper Aircraft, but picked the Caravan after surveying it and having flown the prototype, becoming its standard carrier.[3]

A passenger model, the 208B Grand Caravan, was derived from the Super Cargomaster.[5] Since then, the Caravan has undergone a number of design evolutions, including upgrading the avionics in 2008 to provide a glass cockpit with the Garmin G1000 system.[6] In January 2013 a higher-powered (867 shp from P&WC PT6A-140) version, the Grand Caravan EX, received FAA certification.[7]

In August 2016, Textron announced that it would move the Cessna 208 production line from its Wichita headquarters to its Independence, Kansas production facility, for manufacture alongside along the piston-powered 172S Skyhawk, 182T Skylane, T206H Turbo Stationair and Cessna TTx; and the Citation M2 light jet. The move was made to make room for production of the Citation Longitude and Denali in Wichita.[8]

In May 2012 Cessna announced that an assembly line for the 208 would be established in China, with the government-owned China Aviation Industry General Aircraft (CAIGA) conducting final assembly of Caravans at its plant in Shijiazhuang for the Chinese market.[9] Chinese government approval was granted in September the following year and the first Chinese-assembled Caravan was delivered in December 2013.[10][11] By April 2016 about 30 aircraft, assembled from kits of parts shipped from the US by Cessna, had been delivered to Chinese operators by the joint venture.[12]

Low-density seating in the cabin of a passenger-carrying version

The Cessna 208 is a high-wing braced cabin monoplane powered by a single Pratt & Whitney Canada PT6A turboprop in tractor configuration. The cabin has room for nine passengers and two crew when used as a passenger aircraft with four doors: one for each crew member, an airstair door on the right side of the cabin and a cargo door on the left. The aircraft can be optionally fitted with an underslung cargo pod.

The basic 208 airframe has a fixed tricycle landing gear but can also be fitted with various types of landing gear, allowing it to operate in a wide variety of environments. Some common adaptations include floats with retractable landing gear on the Caravan Amphibian model and skis.[5]

208B Grand Caravan in the Netherlands, modified with roller door for parachuting operations; skydivers sitting on the cabin floor are visible inside the rear roller door.

The Caravan interior can be outfitted with seats or as a cargo compartment. The standard high-density airline configuration has four rows of 1-2 seating behind the two seats in the cockpit. This variant is capable of holding up to thirteen passengers, although it is marketed as being able to make a profit carrying just four.[13] The cabin can be configured in a low density passenger configuration, with 1-1 seating, as a combination of passengers and cargo, or as a strictly cargo aircraft.[14] Many variants include an underbelly cargo pod, which can be used for additional freight capacity, or for passenger baggage. A number of Caravans are operated as skydiving aircraft with the left-side cargo hatch converted to a roll-up door.[15]

The airplane typically seats nine passengers with a single pilot, although with a FAR Part 23 waiver it can seat up to fourteen passengers. The aircraft is also used for cargo operations.

208 Caravan
First production variant with a PT6A-114 turboprop engine and seating for up to nine passengers. The landplane variant was type approved on October 23, 1984 and the seaplane version with Wipline Model 8000 Amphibious/Seaplane Floats was type approved on March 26, 1986. Early aircraft can be modified to use the higher-powered PT6A-114A but have restricted operating limits.[citation needed]

Marketing designation for the 208 Caravan with a higher-powered PT6A-114A engine.[citation needed]

A FedEx 208B Super Cargomaster

208A Cargomaster
A pure-cargo version of the Caravan developed with Federal Express (now FedEx); 40 aircraft produced.[16] All 208A aircraft were serialized as 208 models. 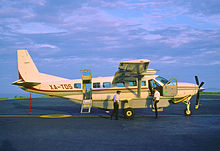 Marketing name for the cargo variant of the 208B series. FedEx purchased 260 of this variant.[citation needed]

Amphibious Caravan taking off from Loch Lomond in Scotland

Soloy Pathfinder 21
Single example of a twin-engined stretched fuselage development of the 208 by the Soloy Corporation. Two PT6D-114A engines mounted side-by-side drove a single propeller; and the fuselage was extended by 70 inches (1.8 m) behind the wing. The project was abandoned as the design was unable to meet certification requirements.[22]

The eCaravan is an electric aircraft modification of the 208B built by AeroTEC and magniX powered by a 750 hp (560 kW) motor and a 1 t (2,200 lb), 750V lithium-ion battery. Its 30 min first flight happened from Grant County International Airport in Moses Lake, Washington, on May 28, 2020, consuming $6 worth of electricity, needing 30-40 min of charging. The Magni500-powered variant can fly 100 mi (160 km) with 4-5 passengers while keeping reserve power, and aims for a certification by the end of 2021, hoping to operate 100-mile flights with a full load of nine passengers with better batteries.[27]

An Iraqi Air Force Cessna 208B launches a Hellfire missile

U-27A
United States Department of Defense designation for the Cessna 208.
C-16
United States Department of Defense designation for proposed variant to be used by the United States Army in El Salvador and Nicaragua during the 1980s.[citation needed]
C-98
Brazilian Air Force designation for the standard U-27.[28]
AC-208 Combat Caravan
Caravan with wing hardpoints. An ISTAR version built by ATK armed with Hellfire missiles is used by the Iraqi Air Force.[29][30] The AC-208 received its combat debut in January 2014 when the Iraqi Air Force began employing it against insurgents in Anbar province.[31] One aircraft crashed in March 2016.[32]
The Lebanese Air Force requested a new AC-208 and the conversion of the 208 it already operated.[33]
Other AC-208s are scheduled to be delivered to countries in the Middle East and Africa through the Foreign Military Sales program. Mali, Mauritania, Niger and Burkina Faso are possible recipients of these AC-208 Combat Caravans.[34][failed verification]

Certified in 100 countries, 2,600 Caravans have been delivered with nearly 20 million flight hours logged by November 2017. Engineered for high payloads and short and rough runways, with single-engine economy and simplicity, Caravans are used for flight training to recreation, commuter airlines to VIP transport, cargo carriers and humanitarian missions.[1] It is also used by government agencies in law enforcement, air ambulance services, police and military.[3]

The Cessna 208 is used by governmental organizations and by a large number of companies for police, air ambulance, passenger transport, air charter, freight and parachuting operations. FedEx operates 239 aircraft.[35]

As of 31 December 2017 there had been 216 Caravan hull losses from all causes, including 206 accidents causing 427 fatalities – an average of 2 fatalities per hull-loss, with 29.7% of all occupants surviving fatal accidents; and six hijackings causing one fatality. For the 198 out of the 216 hull-loss occurrences where the aircraft was in use and its flight nature is known, 36.9% were passenger flights, 33.8% cargo flights, 8.1% military flights, 5.6% special flights – agriculture, survey, etc., 4% private and business flights, 3% test or flight training and 8.1% miscellaneous uses – demonstrations, deliveries, illegal.[37] 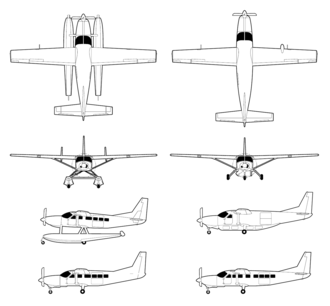 Left: three-axis view of 208 Caravan Amphibian and side view of standard 208 Caravan
Right: 208B Grand Caravan with side views of Super Cargomaster and standard versions