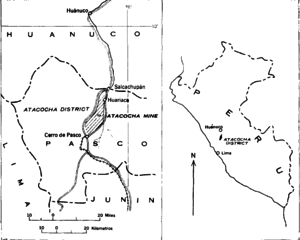 Location of Cerro de Pasco and the Atacocha Mine

Cerro de Pasco is a city in central Peru, located at the top of the Andean mountains. It is the capital of the Pasco region, and an important mining center. At 4,330 metres (14,210 ft) elevation, it is one of the highest cities in the world, and the highest or the second highest city with over 50,000 inhabitants, with elevation reaching up to 4,380 m in the Yanacancha area. It is connected by road and by rail to the capital Lima, as far as 300 km.

Cerro de Pasco became one of the world's richest silver producing areas after silver was discovered there in 1630.[2] It is still an active mining center. The Spanish mined the rich Cerro de Pasco silver-bearing oxide ore deposits since colonial times. Sulfide minerals are more common in the Atacocha district however.

Francisco Uville arranged for steam engines made by Richard Trevithick of Cornwall, England, to be installed in Cerro de Pasco in 1816 to pump water from the mines and allow lower levels to be reached. However, fighting in the Peruvian War of Independence brought production to a halt from 1820 to 1825.[3]

Three major mines in the area include the Machcan, Atacocha, and Milpo. Silver ore occurs in hydrothermal veins or as sulfides and clay minerals replacing the Jurassic Pucara limestone. Porphyry dacite stocks are found intruded near the Atacocha and Milpo mines along the Atacocha Fault. Compania Minera Atacocha started operations at the Atacocha Mine in 1936. Ore minerals include galena and sphalerite.[4]

Contamination of the environment by lead, cadmium and other heavy metals has precipitated a public health crisis in the city, but a 2006 law proposing to evacuate all inhabitants and relocate the city has not yet culminated in concrete action.[5][6]

At 4,330 metres (14,210 ft) above sea level, Cerro de Pasco has an (E) Alpine tundra climate with the average temperature of the warmest month below the 10 °C (50 °F) threshold that would allow for tree growth, giving the countryside its barren appearance. The city is the largest in the world with this classification. Cerro de Pasco has humid, damp and cloudy summers with frequent rainfall and dry, sunny winters with cool to cold temperatures throughout the year. Snowfall occurs sporadically during any season, most commonly around dawn.