In the 1994 general election, under the leadership of Berlusconi, the centre-right ran with two coalitions, the Pole of Freedoms in northern Italy and Tuscany (mainly Forza Italia and the Northern League) and the Pole of Good Government (mainly Forza Italia and National Alliance) in central and southern Italy.[9][10] In the 1996 general election, after the Northern League had left in late 1994, the centre-right coalition took the name of Pole for Freedoms. The Northern League returned in 2000, and the coalition was re-formed as the House of Freedoms; this lasted until 2008.[11]

Since 2008, when Forza Italia and National Alliance merged into The People of Freedom, the coalition has not had official names. The new Forza Italia was formed in late 2013; for the 2018 general election it joined forces with the Northern League, the Brothers of Italy and a collection of mainly centrist forces named Us with Italy–Union of the Centre.

In 2018, the Lega Nord formed a government coalition with the Five Star Movement and without its centre-right allies, which entered the opposition. This led to a deterioration of the centre-right coalition at a national level, although the coalition is still active at the level of local elections.[citation needed]

Silvio Berlusconi during a Forza Italia meeting in May 1994.

In 1994, the media magnate Silvio Berlusconi, previously very close to the Socialist Prime Minister Bettino Craxi and even having appeared in commercials for the Italian Socialist Party, was studying the possibility of making a political party of his own to avoid what seemed to be the unavoidable victory of the left wing at the next elections. Only three months before the election, he presented, with a televised announcement, his new party, Forza Italia. Supporters believe he wanted to avert a communist victory, opponents that he was defending the ancién regime by rebranding it. Whatever his motives, he employed his power in communication (he owned, and still owns, all of the three main private TV stations in Italy) and advanced communication techniques he and his allies knew very well, as his fortune was largely based on advertisement.

Berlusconi managed, in a surprise move, to ally himself both to National Alliance and Northern League, without these being allied with each other. Forza Italia teamed up with the League in the North, where they competed against National Alliance, and with National Alliance in the rest of Italy, where the League was not present. This unusual coalition configuration was caused by the deep hate between the League, which wanted to separate Italy and held Rome in deep contempt, and the nationalist post-fascists; on one occasion, Bossi encouraged his supporters to go find National-Alliance supporters "house by house," suggesting a lynching (which however did not actually take place).

Pole for Freedoms was formed as a continuation of the Pole of Freedoms and Pole of Good Government coalitions, which had both supported the leadership of Silvio Berlusconi at the 1994 general election: the Pole of Freedom was constituted by Forza Italia and Northern League, the Pole of Good Government by Forza Italia and the National Alliance. After that, Lega Nord left the coalition at the end of 1994, the centre-right was forced to reform itself: in 1995, in occasion of the regional elections, an organic alliance was formed. In 1996 it was officially named "Pole for Freedoms" and debuted in the 1996 general election; however, it was defeated by the centre-left alliance The Olive Tree, whose leader was Romano Prodi. 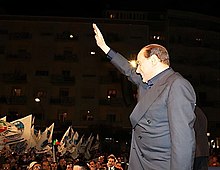 The House of Freedoms was the successor of the Pole of Freedoms/Pole of Good Government and the Pole for Freedoms.

In the run-up of the 2001 general election, after a six-year spell in opposition, which Berlusconi called "the crossing of the desert", he managed to re-unite the coalition under the "House of Freedoms" banner. According to its leader, the alliance was a "broad democratic arch, composed of the democratic right, namely AN, the great democratic centre, namely Forza Italia, CCD and CDU, and the democratic left represented by the League, the New PSI, and the Italian Republican Party.[12][13]

The CdL won the 2001 general election by a landslide and, consequently, the Berlusconi II Cabinet was formed. In government, FI, whose strongholds included Lombardy as well as Sicily, and the LN, which was active only in the Centre-North, formed the so-called "axis of the North", through the special relationship between three Lombards leaders, Berlusconi, Giulio Tremonti and Umberto Bossi; on the other side of the coalition, AN and the Union of Christian and Centre Democrats (UDC), the party emerged from the merger of the CCD and the CDU in late 2002, became the natural representatives of Southern interests.[14][15][16][17]

In 2003 the CdL was routed in local elections by The Olive Tree and the LN threatened to pull out. Also the 2004 European Parliament election were disappointing for FI and the coalition as a whole, even though AN, the UDC and the LN did better than five years before. As a result, Berlusconi and FI were weaker within the CdL.

In 2005 the coalition lost heavily in regional elections, losing six of the eight regions it controlled. The defeat was particularly damaging in the South, while the only two regions which the coalition managed to keep, Lombardy and Veneto, were in the North, where the LN was decisive . This led to a government crisis, particularly after the UDC pulled its ministers out. A few days later, the Berlusconi III Cabinet was formed with minor changes from the previous cabinet.

In the 2006 general election the CdL, which had opened its ranks to a number of minor parties, lost to The Olive Tree.

The People of Freedom

The People of Freedom, launched by Silvio Berlusconi on 18 November 2007, was initially a federation of political parties, notably including Forza Italia and National Alliance, which participated as a joint election list in the 2008 general election.[18] The federation was later transformed into a party during a party congress on 27–29 March 2009. The UDC, now UdC, leaves the centre-right coalition and makes a alliance with The Rose for Italy, the Populars and other centrist parties. UdC joined later the New Pole for Italy in 2010 and With Monti for Italy in 2012.

The PdL formed Italy's government from 2008 to 2011 in coalition with the Northern League. In 2010 the Future and Freedom (FLI) movement, led by the former MSI/AN leader Gianfranco Fini, split from PdL. FLI joined UdC and other parties to form the New Pole for Italy, but they kept supporting the government.

After Berlusconi's resignation during the European debt crisis, the PdL supported Mario Monti's technocratic government in 2011–2012, and after the 2013 general election, it became part of Enrico Letta's government of grand coalition with the Democratic Party, Civic Choice and the Union of the Centre. Angelino Alfano, then party's secretary, functioned as Deputy Prime Minister and Minister of the Interior.

In June 2013 Berlusconi announced Forza Italia's revival and the PdL's transformation into a centre-right coalition.[19][20] On 16 November 2013 the PdL's national council voted to dissolve the party and start a new Forza Italia; the assembly was deserted by a group of dissidents, led by Alfano, who had launched the alternative New Centre-Right party the day before.[21]

Following the 2018 general election, the centre-right coalition, led by Matteo Salvini's League, emerged with a plurality of seats in the Chamber of Deputies and in the Senate, while the anti-establishment Five Star Movement led by Luigi Di Maio became the party with the largest number of votes. The centre-left coalition, led by former Prime Minister Matteo Renzi, came third.[22][23] However, no political group or party won an outright majority, resulting in a hung parliament.[24]

After three months of negotiation, a coalition was finally formed on 1 June between the M5S and the League, whose leaders both became Deputy Prime Ministers in a government led by the M5S-linked independent Giuseppe Conte as Prime Minister.

Main articles: Pole of Freedoms and Pole of Good Government

In the 1994 general election the Pole of Freedoms ran only in northern Italy and Tuscany. It was composed of four parties:

The Pole of Good Government ran only in central Italy (except Tuscany) and southern Italy. It was composed of six parties:

In the 1996 general election the Pole for Freedoms was composed of four parties:

The coalition also had an electoral agreement with:

The coalition had one regional partner:

In the 2001 general election the House of Freedoms was composed of seven parties:

The coalition had five regional partners:

The coalition also had an electoral agreement with:

In the 2006 general election the House of Freedoms was composed of seventeen parties:

The coalition had eight regional partners:

The coalition had one regional partner in foreign constituencies:

The House of Freedoms was also supported by Unitalia, by Italy Again and by the National Democratic Party and talks with Sicilian Alliance failed.

Berlusconi launched The People of Freedom in late 2007; this was joined by FI, AN and minor parties,[29] and continued its alliance with the LN.[30]

In the 2008 general election the coalition was composed of three parties:

The coalition had four regional partners:

In the 2013 general election[36] the coalition was composed of nine parties.

The coalition had eight regional partners:

Negotiations with Alto Adige in the Heart (AAC) failed.[49]

In the 2018 general election the coalition was composed of five parties:

The coalition had ten regional partners: