In 1962 the Christian Democracy (DC) leader Amintore Fanfani formed a cabinet with members of the Italian Social Democratic Party (PSDI) and the Italian Republican Party (PRI); it is considered the beginning of the Organic Centre-left.[7]

On 4 December 1963, Aldo Moro formed the first government with the support of the Italian Socialist Party (PSI). Prominent Socialist politicians, such as Pietro Nenni and Antonio Giolitti, were appointed ministers. After few years the Christian Democratic leader Mariano Rumor, proposed a new government coalition composed of centre-left parties. The Rumor cabinets approved the divorce law, a new Workers' Statute, the creation of the Antimafia Commission and a reform to give more powers and autonomy to the Regions. The coalition still judged the Italian Communist Party (PCI) and the Italian Social Movement as too extreme for participation in government. Internationally, the coalition relied on a strong pro-Europeanism and atlanticism from a pro-Arab policy, (Craxi and Andreotti). This fact caused many frictions between the Liberals and the Socialists, and was one of the causes of disintegration of the coalition.

After the fall of the Organic Centre-left, a new season began, with the establishment of the so-called, Historic Compromise, an Italian historical political alliance and accommodation between Christian Democrats and Communists in the 1970s. In 1973, the PCI's General Secretary Enrico Berlinguer launched in Rinascita (a communist magazine) a proposal for a "democratic alliance" with the DC, embraced by Aldo Moro. The call for this alliance was inspired by the overthrow of the Allende Government in Chile. For Berlinguer, the events in Chile proved that the Marxist left could not aspire to govern in democratic countries without establishing alliances with more moderate forces. After the 1973 Chilean coup, there was cooperation between the PCI and DC that became a political alliance in 1976. Then Berlinguer's PCI attempted to distance itself from the Soviet Union, with the launching of "Eurocommunism" along with the Spanish Communist Party and the French Communist Party.

However, the Historic Compromise was unpopular among the other moderate leftist groups like the Italian Republican Party and Italian Socialist Party, led respectively by Ugo La Malfa and Bettino Craxi. Also, the centrist Christian Democrat Giulio Andreotti had doubts about the accommodation.[8] At the DC XIV Congress of 1980, the DC's moderate wing ("Democratic Initiative", "Dorothean" and "New Force") won with an anti-communist programme, obtaining the 57.7% of the vote, while the DC's conservative wing led by Benigno Zaccagnini and Giulio Andreotti's faction "Spring", ironically, obtained 42.3% with a pro-Compromise programme. The new DC Secretary became Flaminio Piccoli, a Dorothean, and the Compromise was discontinued. On November 1980 Berlinguer announced the end of the Historic Compromise.

Road to The Olive Tree 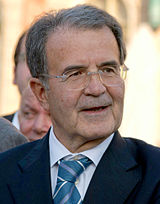 Following the 1994 general election, which was won by the centre-right coalition of Silvio Berlusconi, the left-wing Alliance of Progressives and the centrist Pact for Italy started a parliamentary cooperation, which brought in March 1995 to the foundation of The Olive Tree. The historical leader and ideologue of these coalitions was Romano Prodi, Professor of Economics and former leftist Christian Democrat, who invented the name and the symbol of The Olive Tree with Arturo Parisi in 1995.[9]

In 1995 the Lega Nord left the Pole of Freedoms and supported Lamberto Dini's technocratic government, together with the Pact for Italy and the Alliance of Progressives.

On 21 April 1996, The Olive Tree won 1996 general election in alliance with the Communist Refoundation Party (PRC), making Romano Prodi the Prime Minister of Italy. The Olive Tree's largest partner was the Democratic Party of the Left, which contained the bulk of what had once been the PCI. The PDS supplied 16 ministers and 10 junior ministers–the first time that (former) Communists had taken part in government since 1947. One of their leaders, Walter Veltroni, who ran in ticket with Prodi in a long electoral campaign, was Deputy Prime Minister. On 9 October 1998, the Prodi I Cabinet fell when PRC left the alliance. Since 21 October 1998 The Olive Tree was the core of the governments led by Massimo D'Alema and by Giuliano Amato. When D'Alema became Prime Minister, it was the first time ever in both Italy and Western Europe that an heir of the communist tradition came to lead a government. On 13 May 2001, led by Francesco Rutelli, who ran in ticket with Piero Fassino, the coalition lost the general elections against Silvio Berlusconi and his House of Freedoms centre-right coalition.

The Union was the direct heir of The Olive Tree coalition. However, The Union was an heterogenous alliance that also included parties of the radical left, which were not part of The Olive Tree. Romano Prodi won the April 2006 general election by a very narrow margin due to Calderoli new electoral law, although Silvio Berlusconi first refused to acknowledge defeat. Prodi's coalition proved to be extremely frail, as the two-vote margin in the Senate allowed almost any party in the coalition to veto legislation and political views inside the coalition spanned from far-left Communist parties to Christian Democrats. 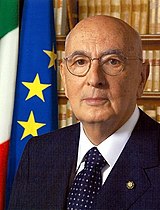 The centre-left majority coalition, on 7 May 2006, officially endorsed Giorgio Napolitano as its candidate in the presidential election that began on 8 May. The Vatican endorsed him as President through its official newspaper, L'Osservatore Romano, just after The Union named him as its candidate, as did Marco Follini, former secretary of the Union of Christian and Centre Democrats, a member party of the House of Freedoms. Napolitano was elected on 10 May, in the fourth round of voting — the first of those requiring only an absolute majority, unlike the first three which required two-thirds of the votes — with 543 votes (out of a possible 1009). At the age of 80, he became the first former Communist to become President of Italy

Less than a year after he had won the elections, on 21 February 2007, Prodi tendered his resignation to President Napolitano after the government was defeated in the Senate by 2 ballots in a vote on foreign policy. On 24 February, President Napolitano invited him to return to office and face a vote of confidence. Major causes of friction inside the coalition were, the 2006 pardon Act (criticised by the right and by the Italy of Values party), a draft bill to establish civil unions (vetoed by Christian Democrats), Italy's continued involvement in Afghanistan (strongly opposed by left-wing parties), and finally the much publicised house-arrest of Clemente Mastella's wife (then a prominent politician at the regional level) over a corruption scandal. Mastella's party, UDEUR, held just enough seats in the Senate that his eventual decision to withdraw its support for the government meant the end of the legislature on February 6, 2008. Mastella, who also resigned from his office as Minister of Justice, cited the lack of personal support from his coalition partners' as one the reasons behind his decision,[10] together with a proposed reform of the electoral system which would have made it difficult for small parties like his own to gain seats in the Italian Parliament.

The foundation of the Democratic Party

The Democratic Party was founded on 14 October 2007 as a merger of various centre-left parties which had been part of The Union in the 2006 general election. At foundation the majority of the PD was formed by the Democrats of the Left (heirs of the Italian Communist Party) and the largely Catholic-inspired Democracy is Freedom – The Daisy.[11] Within the party, an important role is thus played by Christian leftists, who are direct heirs of the former Christian Democracy's left.[12][13][14]

After the resignation of Silvio Berlusconi as Prime Minister in November 2011, the PD gave external support to Mario Monti's technocratic government.[15][16]

Following the 2013 general election and the 2014 European Parliament election, the PD was the largest party in the Chamber of Deputies, the Senate and the European Parliament, respectively. Since April 2013 Enrico Letta, a Democrat, was Prime Minister, at the head of a government sustained by a grand coalition including The People of Freedom (later replaced by the New Centre-Right), Civic Choice and the Union of the Centre (later replaced by the Populars for Italy). Following his election as party leader, in February 2014 Matteo Renzi called for "a new phase" and, consequently, the party's national board voted to ask Letta to resign.[17][18] Subsequently, Renzi was sworn in as Prime Minister at the head of the same coalition.[19] As of 2015, other than the national government, Democrats head fifteen regional governments out of twenty and function as coalition partner in Trentino-Alto Adige/Südtirol.

In the 2018 general election the centre-left, with Renzi as leader, obtained its worst result ever: 22.9% of the vote, well behind the centre-right coalition and the M5S. Following the defeat, Renzi resigned from secretary of the PD[20] and his deputy Maurizio Martina started functioning as acting secretary.

In 2019, the PD formed a coalition with the Five Star Movement (M5S) and Free and Equal (LeU), which was supported by the members of the centre-left coalition in 2018.

In the 1996 general election and during the Prodi I Cabinet the coalition was composed of nine parties:

The coalition had six regional partners:

The coalition was externally supported by:

The Olive Tree had an electoral agreement with the PRC,[21] under which some single-seat constituencies were reserved to the party, which ran under the banner of the Alliance of Progressives, the left-wing coalition (including the PDS and the PRC) which contested the 1994 general election.

In 1998 the Communist Refoundation Party brought down the Prodi II Cabinet.[22] with a splinter faction forming the Party of Italian Communists.[23] In 1998–2001, during the two governments led by Massimo D'Alema (I Cabinet and II Cabinet, 1998–2000) and the one led by Giuliano Amato (Amato II Cabinet, 2000–2001), the coalition was composed of eight parties:

In the 2001 general election the coalition, led by Francesco Rutelli, was composed of nine parties:

The coalition had nine regional partners:

In the 2004 European Parliament election, the United in the Olive Tree joint list, was composed of four parties:

The coalition had six regional partners:

In the 2006 general election the coalition was composed of thirteen parties:

The Union was supported by the Autonomists for Europe and the New Action Party.

The coalition had eleven regional partners:

In the 2008 general election the coalition, led by Walter Veltroni,[27] was composed of three parties:

Alliance only in South Tyrol:

The coalition had four regional partners:

In the 2013 general election, the coalition ran as Italy. Common Good under the leadership of Pier Luigi Bersani,[30] and was composed of four parties:

The coalition had five regional partners:

In the 2018 general election the coalition is composed of four electoral lists:

The coalition has seven regional partners:

The Centre-left coalition was also supported by the Ladin Autonomist Union[32] and the Slovene Union.[33]

As of 2020, three centre-left parties are members of Giuseppe Conte's government, along with the Five Star Movement: