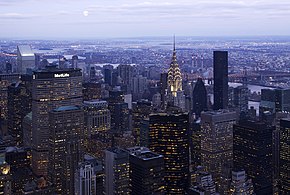 Midtown Manhattan in New York City, the largest central business district in the world. Shown is the terraced crown of the Chrysler Building lit at dawn.

A central business district (CBD) is the commercial and business center of a city. In larger cities, it is often synonymous with the city's "financial district". Geographically, it often coincides with the "city centre" or "downtown", but the concepts are separate: many cities have a central business district located away from its commercial or cultural city centre or downtown, or even several CBDs at once. In London, for example, the "city centre" is usually regarded as encompassing the historic City of London and the medieval City of Westminster, whereas the City of London and the transformed Docklands area containing Canary Wharf are regarded as its two CBDs. In New York City, Midtown Manhattan is the largest central business district in the city and in the world; yet Lower Manhattan, commonly called Downtown Manhattan, represents the second largest, and second, distinct CBD in New York City and is geographically situated south of Midtown. In Chicago, the Chicago Loop is the second largest central business district in the United States and is also referred to as the core of the city's downtown. Mexico City also has a historic city centre, the colonial-era Centro Histórico, along with two CBDs: the mid-late 20th century Paseo de la Reforma – Polanco, and the new Santa Fe. 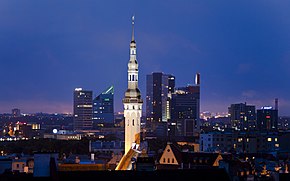 The shape and type of a CBD almost always closely reflect the city's history. Cities with strong preservation laws and maximum building height restrictions to retain the character of the historic and cultural core will have a CBD quite a distance from the centre of the city. This is quite common for European cities such as Paris or Vienna. In cities in the New World that grew quickly after the invention of mechanised modes such as road or rail transport, a single central area or downtown will often contain most of the region's tallest buildings and act both as the CBD and the commercial and cultural city center. Increasing urbanisation in the 21st century have developed megacities, particularly in Asia, that will often have multiple CBDs scattered across the urban area. It has been said that downtowns (as understood in North America) are therefore conceptually distinct from both CBDs and city centers.[1] No two CBDs look alike in terms of their spatial shape, however certain geometric patterns in these areas are recurring throughout many cities due to the nature of centralised commercial and industrial activities.[2]

In Australia the acronym CBD is used very commonly to refer to major city "centres".[3] It is used in particular to refer to the skyscraper districts in several state capital cities: Adelaide, Brisbane, Melbourne, Perth, and Sydney.

Due to Berlin's history of division during the Cold War, the city contains central business districts both in West (Kurfürstendamm) and East Berlin (Alexanderplatz), as well as a newly built business centre near Potsdamer Platz. The city's historic centre – the location of the Reichstag building, as well as the Brandenburg gate and most federal ministries – was largely abandoned when the Berlin Wall cut through the area. Only after the reunification with the redevelopment of Potsdamer Platz, and the construction of numerous shopping centers, government ministries, embassies, office buildings and entertainment venues, was the area revived.

In Frankfurt am Main, there is a business district which is in the geographical centre of the city and it is called the Bankenviertel. 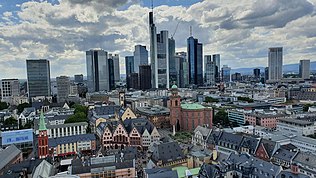 Central has been the political and financial centre of Victoria.

In Düsseldorf, there is a business district which is located around the famous High-Street Königsallee with banks, shops and offices.[4]

The largest CBD in Indonesia is known as the Golden Triangle (Segitiga Emas in Indonesian language) in Jakarta. The area is located along the main avenues of Jakarta, Jalan Jenderal Sudirman – Jalan M.H. Thamrin -Jalan H.R. Rasuna Said – Jalan Prof. Dr. Satrio – Jalan Jenderal Gatot Subroto. Sudirman Central Business District, a super block that is located within the Golden Triangle, is the first of its kind in Indonesia, and one of the largest commercial center development in the city. Jakarta started developing the sophistication of its Business District in the early 1960s before to host the Asian Games in 1962.[5]

Surabaya in East Java, built its first central business district in the Darmo region. The construction was expected to be completed by 2018 with 150 SOHO units and 500 residences.[6]

In Pakistan, a central business district or a large, concentrated urban setting within a settlement is called a shehar. Karachi is Pakistan's largest city and the country's economic hub; the I. I. Chundrigar Road of the city, often called the "Wall Street of Pakistan," acts as Karachi's main financial district and is essentially a center of economic and industrial activity. Shahra-e-Faisal in Karachi is also one of the most important business districts of Pakistan.

In Peru the central business district is San Isidro, in Lima, which hosts the majority of Peru's financial industry headquarters.[8] Although still a largely residential district, the commercial and business activity located in or in the vicinity of the area defined by avenues Camino Real, Javier Prado Este, República de Panamá and Aramburú is highly regarded as Peru's financial and corporate heart.[9][10] It has a permanent population of around 63,000 inhabitants[11] and, during weekday business hours, a floating population that exceeds 700,000 daily commuters from other districts of Lima.[12] San Isidro is served by three stations of El Metropolitano, Lima's bus rapid transit system: Estación Javier Prado, Estación Canaval y Moreyra (with over 16,000 daily passengers)[13][14] and Estación Aramburú.

Since the late 2000s (decade) the southeastern district of Surco[15] has experienced a significant increase in upscale corporate developments in the area comprised by avenues Manuel Holguín, El Derby, El Polo and La Encalada due to lower restrictions to grant construction licences and proximity to residential middle and upper class districts and is set to become, after traditional San Isidro and Miraflores, the new corporate centre of Lima.

The area commonly called the "CBD" is located within the Downtown Core, one of the constituent planning areas of the Central Area, the country's city-centre. Its densest point is centered around Raffles Place, where most of Singapore's skyscrapers are located. The "CBD" term has also been used at times to refer to the Central Area as a whole.

In the future, the government is planning to redevelop the town centre of Jurong East into a secondary satellite CBD.[16] The area has also been earmarked as the site of the rail terminus for the Kuala Lumpur–Singapore High Speed Rail. 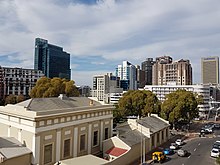 South Africa's largest cities, namely Cape Town, Durban, Johannesburg, Pretoria, and Port Elizabeth, have CBDs which house the headquarters of many of the country's largest companies, as well as convention centres, and the cities' tallest buildings.

Cape Town is known for having South Africa's most iconic skyline (including the famous Table Mountain) and CBD.[17]

The term CBD is used in formal contexts, such as news reports, however the term town is used colloquially.

AZCA business district in Madrid on the left, with one of the Puerta de Europa towers in the centre and with the CTBA skyscrapers at the back-right of the picture.

The biggest central business districts of Spain are located in the country's capital, Madrid. The Paseo de la Castellana holds the city's main business districts: the Gate of Europe, AZCA and CTBA. AZCA is 19-hectare super block near Real Madrid's stadium Santiago Bernabéu. It used to be the country's main business area during the 1980s and 1990s, when most of its skyscrapers were built. The tallest building of AZCA is the Torre Picasso, a 158-tower designed by the World Trade Center's architect, and contains the main offices in Spain of Google and Deloitte. The Gate of Europe consists of two twin towers, which hold Spanish bank Bankia and real state company Realia. Just a few blocks north is the CTBA, a complex of four skyscrapers which are the tallest in Spain. Architects such as Norman Foster, Ieoh Ming Pei and Cesar Pelli have designed its towers, which were completed in 2008. The tallest building, the Torre de Cristal, is the fourth tallest building is Western Europe, with a height of 250 metres. The complex is home to offices from well known companies such as KPMG, Coca-Cola, Volkswagen, Bankia, Cepsa, Pwc, OHL and holds the embassies of the Netherlands, United Kingdom, Canada and Australia, as well as a 5-star hotel from Eurostars. A fifth tower is currently being built and will have the campus of the Instituto de Empresa university.

In Barcelona, the 22@, Gran Via and Granvia l'Hospitalet are the main business districts. Despite the fact that the Catalan capital does not have a reputation for skyscrapers and financial hubs, in the recent years it has attracted several media and technology companies such as Microsoft and Yahoo!. In 2005, the Torre Agbar, designed by French architect Jean Nouvel, became the third tallest building in the city with a height of 145 metres. The building soon became a symbol of Barcelona and was going to become a Hyatt hotel. However, the tower is still empty due to administrative problems.[18]

Ankara became the capital of Turkey in the 1920s. Istanbul stayed the main economic center of country up to this day. Ankara is called as "officer city". Currently a Central Business District is planned in an area of 262 hectares[19] in Varlık, Altındağ.