The Central Council of Ukraine (Ukrainian: Українська Центральна Рада, Ukrayins'ka Tsentral'na rada) (also called the Tsentralna Rada or the Central Rada) was the All-Ukrainian council that united the political, public, cultural and professional organizations of the Ukrainian People's Republic. After the All-Ukrainian National Congress (19–21 April 1917), the Council became the revolutionary parliament in the interbellum lasting until the Ukrainian-Soviet War.

From its beginning the council directed the Ukrainian national movement and with its four Universals led the country from autonomy to full sovereignty. During its brief existence from 1917 to 1918, the Central Rada, which was headed by the Ukrainian historian and ethnologist Mykhailo Hrushevsky, evolved into the fundamental governing institution of the Ukrainian People's Republic and set precedents in parliamentary democracy and national independence that formed the basis of an independent Ukrainian identity after the dissolution of the Soviet Union.

During the Soviet-era official ideology described the Central Council as a counter-revolutionary body of the bourgeoisie and petty-bourgeois nationalist parties.[1]

Mykhailo Hrushevsky was elected as the Head of the Rada while Volodymyr Naumenko, Dmytro Doroshenko, and Dmytro Antonovych were appointed as his deputies. On March 22, 1917 the Rada published its first declaration - To the Ukrainian people - in support of the Russian Provisional Government.

However, straight after the convocation of the All-Ukrainian National Congress, the Rada transformed into a provisional parliament that consisted of 150 members elected from the Ukrainian political parties, professional and cultural organizations and delegates from the guberniyas. During the National Congress Hrushevsky was reelected as the chairman of the Rada, while the leaders of the most popular political parties Serhiy Yefremov and Volodymyr Vynnychenko were appointed as his deputies.

During the lifetime of the Central Rada nine plenary sessions took place - eight in 1917, one in 1918 - and one extended session of the Mala Rada. Prior to the First Ukrainian Universal the Central Rada was increased by 130 representatives that were delegated by the II Military Congress (June 23, 1917) and 133 members of the Peasants' Deputies Council who were elected at the I All-Ukrainian Peasants' Congress (June 15, 1917). 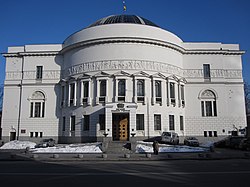 The Ukrainian Club Building, now the Pedagogical Museum, a meeting place of the Little Council

After the declaration of autonomy (First Ukrainian Universal, 10 June 1917) the Central Rada elected the General Secretariat, an autonomous government of Ukraine consisting of eight secretariats. The Soviet Encyclopedia pointed to the fact that autonomy was declared in spite of the Provisional Government and then the Central Rada compromised and postponed the declaration until the convention of a Constituent Assembly. The Encyclopedia did not discuss the details and the factors upon which the Rada based its decision and described it as deceptive. While in fact the Russian Provisional Government and Alexander Kerensky, in particular issued the Instruktsiya on 16 July 1917 in which it recognized regional autonomy and the General Secretariat, although it declared substantial changes to the Rada's proposition and decided to "appoint as the supreme body of government of regional affairs in Ukraine a separate body, the General Secretariat, the composition of which will be determined in agreement with the Central Rada". According to the instruction the Secretariat was to be the representative body of the Provisional Government. Such a response disappointed Vynnychenko who protested it and dissolved his cabinet. After acknowledgment by the Central Rada of the Provisional Government Instruktsiya, it issued its Second Universal confirming the agreement between both governments. The composition of the Rada also was increased by 100 representatives elected at the I All-Ukrainian Workers' Congress (July 24–27, 1917) and other representatives of minorities.

Texts of the Tsentralna Rada Universals

The Soviet Encyclopedia also claims that the Rada took an aggressive opposition against the October Revolution as well as the Kiev Bolshevik Uprising. Then the Rada, by pulling towards Kiev the nationalist military units, overtook the government and on November 13 occupied the city. A week later it declared itself the supreme government of the Ukrainian People's Republic (UNR) (the Soviet Encyclopedia here used the words so called) and established a strict terrorist regime. On 25 December 1917 the All-Ukrainian Congress of Soviet Ukraine declared the Rada illegitimate while its participants organized an parallel government to oppose it.

The Soviet Encyclopedia did not provide information that the Kiev Uprising took place with the collaboration of the Bolsheviks and other parties that were all part of the Rada, nor an unabridged account of events on November 13 and November 16.

By the end of July 1917 the Central Rada formally had 822 deputies (according to Pavlo Khrystiuk). Its members belonged to the following parties:

The Mala Rada was elected out of these 822 deputies with 58 members including 18 members of various national minorities. From the initiative of the Central Rada a congress of Russian nationalities took place in Kiev on 21–28 September 1917.

Fate of the Central Council members

All members of the council were proclaimed outlaws by the Soviet government of Ukraine in December 1917 as part of a national-bourgeois government. On 29 January 1918 Bolshevist troops entered Kiev and declared a Soviet Coup d'etat. The Kiev garrison joined with the Soviets and deposed the Rada. Alexander Odoevsky attempted to form a new government but was arrested. The Bolsheviks established Kharkiv as the capital of the Soviets of the Ukraine.[3]

Assassinated (or killed in action)

Other victims and related people