The name of the Central Bank's building is the Tom Adams Financial Centre, which is a ten-storey building located on Spry Street in Bridgetown. As part of the complex, there is a 491-seat theatre/auditorium known as the Frank Collymore Hall. The building was constructed between 1982 and 1986 and it was opened September 18th 1986.[3]

The Global Competitiveness Report for 2008–09 ranked the soundness of Barbados's commercial banks as 21st out of 134 global jurisdictions assessed.[4][5]

At its inception the Central Bank of Barbados had certain objectives.

Today the regulatory capacity of the central bank handles the issuance of Barbadian banknotes and coins, and licensing of agencies such as: banks, investment businesses, depository trust and finance companies. It also undertakes supervision of Barbadian financial institutions, credit worthiness of the financial system, administering of the international reserves, and reporting regularly to the country on the national finances. 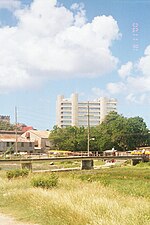 The Bank also has two Deputy Governors in the persons of Mrs. Michelle Doyle Lowe and Mr. Michael D Carrington, both in acting capacities.[11]

Awards of the CBB