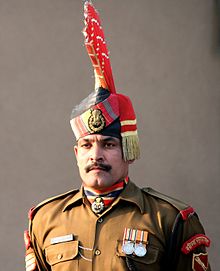 A member of India's Border Security Force in ceremonial attire

Central Armed Police Forces are organized with the primary role of border guarding for BSF, ITBP, SSB; Security of sensitive establishments by CISF, Assisting Police to tackle Law & Order, Counter-Terrorist Operations, Counter Naxal Operations by CRPF, NSG. Apart from the primary role, all CAPFs are involved in assisting Police in Law & Order situations and also Army in Counter-Terrorist Operations. BSF & CRPF have assisted the army during external aggression in the past. CAPFs work along with both Army & Police in different roles assigned to them.

On 5 February 2019, the Supreme Court of India ruled[5][6] that all CAPFs would be granted better pay benefits or Non-Functional Financial Upgradation (NFFU),[7] and the status of Organised Group ‘A’ Services (OGAS), ending a nearly decade-long battle for the central armed police. In a landmark judgment by Justices Rohinton Fali Nariman and M R Shah, the court said the CAPF officers–from BSF, CRPF, SSB, ITBP, and CISF– will now be granted the NFFU and will be considered as organized group A Central Services. As Assam Rifles Cadre officers are not covered under this as they do not come under categorisation of CAPFs.

Recruitment of candidates to the CAPFs may be conducted by the Union Public Service Commission, the Staff Selection Commission, or the respective service HQs depending on the post to be filled. There are three possible pathways for recruitment to the CAPFs:

Sub Inspectors are recruited through competitive examination conducted by Staff Selection Commission and they are referred to as DASOs (Directly Appointed Subordinate Officers). DESOs (Departmental Entry Subordinate Officers) are those officers who have been promoted through departmental exams conducted internally for Constables, Head Constables, and Assistant Sub Inspectors.

Constables are recruited through a competitive examination conducted by Staff Selection Commission.

Apart from the above modes, CAPFs conduct recruitment for specialized posts such as Engineers, Doctors, etc. among DAGOs and Wireless operators, Technicians, Nursing Staff, etc. among subordinate officers and constables directly under their own authority.

Initially, women were not recruited for the Central Armed Police Forces. In 1992 Asha Sinha created history by being the first Woman Commandant of any of the Central Armed Forces in India when she was selected as Commandant, Central Industrial Security Force, for Mazagon Dock Shipbuilders Limited. Earlier the role of Women was allowed but limited to supervisory roles in the Central Armed Police Forces.[11] The Parliamentary Committees of India for women's empowerment recommended greater roles for women in the CAPF. On these recommendations, the Ministry of Home Affairs declared reservation for women in constabulary in paramilitary forces, and later declared that they can also be inducted as officers in combat roles in all five Central Armed Police Forces.[11] The Union Home Minister announced that women's representation in the CRPF and CISF would be made 15 percent while it would be 5 percent in the BSF, ITBP and SSB.[12] On 5 January 2016, it was decided that 33 percent of posts at the constabulary level would be reserved for women in the CRPF and the CISF to begin with, and 14-15 percent of posts at the constable level in the BSF, SSB and ITBP in a phased manner, Rijiju said. In 2016, an IPS Officer Archana Ramasundaram of 1980 Batch rewrote history when she became the first woman to become the Director General of Police of a Paramilitary Force as DG, Sashastra Seema Bal.[13] 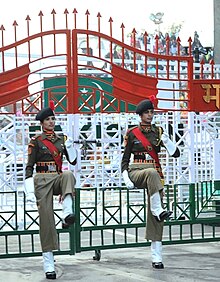 The primary role of the Border Security Force is to guard the Indo-Pakistan and Indo-Bangladesh borders, it is deployed both on the international border and the LOC. The BSF also has active roles during times of war. It has 257,363 personnel in 186 battalions.[16]

One of the largest industrial security forces in the world, the Central Industrial Security Force provides security to various Public Sector Undertakings (PSUs) and other critical infrastructure installations, major airports across the country and provides security during elections and other internal security duties and VVIP protection. It has a total strength of about 144,418 personnel in 132 battalions.[14] including 9 reserve battalions.

The Indo-Tibetan Border Police is deployed for guarding duties on the Indo-China border from Karakoram Pass in Ladakh to Diphu Pass in Arunachal Pradesh covering a total distance of 3488 km.[17] It has 89,432 personnel in 56 fighting, 2 DM and 4 specialized battalions.[18][14]

The objective of the Sashastra Seema Bal (English: Armed Border Force) is to guard the Indo-Nepal and Indo-Bhutan borders. It has 76,337 personnel and 67 battalions, as well as some reserved battalions.[19][14][20]