The Celtic languages (usually /ˈkɛltɪk/, but sometimes /ˈsɛltɪk/ in the US)[4] are a group of related languages descended from Proto-Celtic. They form a branch of the Indo-European language family.[5] The term "Celtic" was first used to describe this language group by Edward Lhuyd in 1707,[6] following Paul-Yves Pezron, who made the explicit link between the Celts described by classical writers and the Welsh and Breton languages.[7]

During the 1st millennium BC, Celtic languages were spoken across much of Europe and central Anatolia. Today, they are restricted to the northwestern fringe of Europe and a few diaspora communities. There are four living languages: Welsh, Breton, Irish, and Scottish Gaelic. All are minority languages in their respective countries, though there are continuing efforts at revitalisation. Welsh is an official language in Wales and Irish is an official language of Ireland and of the European Union. Welsh is the only Celtic language not classified as endangered by UNESCO. The Cornish and Manx languages went extinct in modern times. They have been the object of revivals and now each has several hundred second-language speakers.

The Celtic languages have a rich literary tradition. The earliest specimens of written Celtic are Lepontic inscriptions from the 6th century BC in the Alps. Early Continental inscriptions used Italic and Paleohispanic scripts. Between the 4th and 8th centuries, Irish and Pictish were occasionally written in an original script, Ogham, but the Latin alphabet came to be used for all Celtic languages. Welsh has had a continuous literary tradition from the 6th century AD.

The other two, Cornish (a Brittonic language) and Manx (a Goidelic language), died out in modern times[9][10][11] with their presumed last native speakers in 1777 and 1974 respectively. For both these languages, however, revitalisation movements have led to the adoption of these languages by adults and children and produced some native speakers.[12][13] 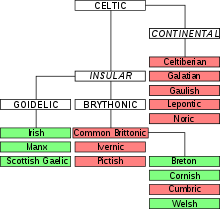 Classification of Celtic languages according to Insular vs. Continental hypothesis. (click to enlarge) 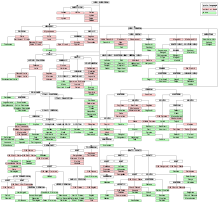 Celtic is divided into various branches:

The second of the four Botorrita plaques. The third plaque is the longest text discovered in any ancient Celtic language. This, the second plaque, is inscribed in Latin however.[50]

Scholarly handling of the Celtic languages has been contentious owing to scarceness of primary source data. Some scholars (such as Cowgill 1975; McCone 1991, 1992; and Schrijver 1995) distinguish Continental Celtic and Insular Celtic, arguing that the differences between the Goidelic and Brittonic languages arose after these split off from the Continental Celtic languages.[55] Other scholars (such as Schmidt 1988) distinguish between P-Celtic and Q-Celtic, putting most of the Gaulish and Brittonic languages in the former group and the Goidelic and Celtiberian languages in the latter. The P-Celtic languages (also called Gallo-Brittonic) are sometimes seen (for example by Koch 1992) as a central innovating area as opposed to the more conservative peripheral Q-Celtic languages.

The Breton language is Brittonic, not Gaulish, though there may be some input from the latter,[56] having been introduced from Southwestern regions of Britain in the post-Roman era and having evolved into Breton.

The distinction of Celtic into these four sub-families most likely occurred about 900 BC according to Gray and Atkinson[57][58] but, because of estimation uncertainty, it could be any time between 1200 and 800 BC. However, they only considered Gaelic and Brythonic. The controversial paper by Forster and Toth[59] included Gaulish and put the break-up much earlier at 3200 BC ± 1500 years. They support the Insular Celtic hypothesis. The early Celts were commonly associated with the archaeological Urnfield culture, the Hallstatt culture, and the La Tène culture, though the earlier assumption of association between language and culture is now considered to be less strong.[60][61] 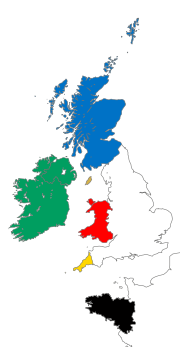 There are legitimate scholarly arguments in favour of both the Insular Celtic hypothesis and the P-Celtic/Q-Celtic hypothesis. Proponents of each schema dispute the accuracy and usefulness of the other's categories. However, since the 1970s the division into Insular and Continental Celtic has become the more widely held view (Cowgill 1975; McCone 1991, 1992; Schrijver 1995), but in the middle of the 1980s, the P-Celtic/Q-Celtic hypothesis found new supporters (Lambert 1994), because of the inscription on the Larzac piece of lead (1983), the analysis of which reveals another common phonetical innovation -nm- > -nu (Gaelic ainm / Gaulish anuana, Old Welsh enuein "names"), that is less accidental than only one. The discovery of a third common innovation would allow the specialists to come to the conclusion of a Gallo-Brittonic dialect (Schmidt 1986; Fleuriot 1986).

The interpretation of this and further evidence is still quite contested, and the main argument in favour of Insular Celtic is connected with the development of the verbal morphology and the syntax in Irish and British Celtic, which Schumacher regards as convincing, while he considers the P-Celtic/Q-Celtic division unimportant and treats Gallo-Brittonic as an outdated hypothesis.[45] Stifter affirms that the Gallo-Brittonic view is "out of favour" in the scholarly community as of 2008 and the Insular Celtic hypothesis "widely accepted".[62]

Within the Indo-European family, the Celtic languages have sometimes been placed with the Italic languages in a common Italo-Celtic subfamily, a hypothesis that is now largely discarded, in favour of the assumption of language contact between pre-Celtic and pre-Italic communities.[citation needed]

How the family tree of the Celtic languages is ordered depends on which hypothesis is used:

Eska (2010)[63] evaluates the evidence as supporting the following tree, based on shared innovations, though it is not always clear that the innovations are not areal features. It seems likely that Celtiberian split off before Cisalpine Celtic, but the evidence for this is not robust. On the other hand, the unity of Gaulish, Goidelic, and Brittonic is reasonably secure. Schumacher (2004, p. 86) had already cautiously considered this grouping to be likely genetic, based, among others, on the shared reformation of the sentence-initial, fully inflecting relative pronoun *i̯os, *i̯ā, *i̯od into an uninflected enclitic particle. Eska sees Cisalpine Gaulish as more akin to Lepontic than to Transalpine Gaulish.

Eska considers a division of Transalpine–Goidelic–Brittonic into Transalpine and Insular Celtic to be most probable because of the greater number of innovations in Insular Celtic than in P-Celtic, and because the Insular Celtic languages were probably not in great enough contact for those innovations to spread as part of a sprachbund. However, if they have another explanation (such as an SOV substratum language), then it is possible that P-Celtic is a valid clade, and the top branching would be:

Although there are many differences between the individual Celtic languages, they do show many family resemblances.

The lexical similarity between the different Celtic languages is apparent in their core vocabulary, especially in terms of the actual pronunciation of the words. Moreover, the phonetic differences between languages are often the product of regular sound change (i.e. lenition of /b/ into /v/ or Ø).

The table below contains words in the modern languages that were inherited directly from Proto-Celtic, as well as a few old borrowings from Latin that made their way into all the daughter languages. Among the modern languages, there is often a closer match between Welsh, Breton, and Cornish on one hand, and Irish, Gaelic and Manx on the other. For a fuller list of comparisons, see the Swadesh list for Celtic.

Article 1 of the Universal Declaration of Human Rights:

All human beings are born free and equal in dignity and rights. They are endowed with reason and conscience and should act towards one another in a spirit of brotherhood.

It has been suggested that several poorly-documented languages may possibly have been Celtic.

Other scholars see greater linguistic affinities between Lusitanian, proto-Gallo-Italic (particularly with the Ligurian language (ancient)) and Old European.[78][79] Prominent modern linguists such as Ellis Evans, believe that Gallaecian-Lusitanian was in fact one same language (not separate languages) of the "P" Celtic variant.[80][81]