In English, Castilian Spanish sometimes refers to the variety of Peninsular Spanish spoken in northern and central Spain or as the language standard for radio and TV speakers.[1][2][3][4] In Spanish, the term castellano (Castilian) usually refers to the Spanish language as a whole, or to the medieval Old Spanish language, a predecessor to modern Spanish. 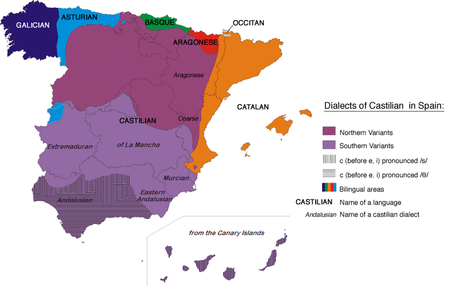 Map of languages and dialects in Spain.
Main article: Names given to the Spanish language

Inside Spain, there are many regional variations of Spanish, which can be divided roughly into four major dialectal areas:

The Spanish language is a pluricentric language. Because it is spoken in numerous countries around the world, each with differing standards, there is no single authority that can speak for the global community of Spanish speakers. However, regional authorities do exist. The Real Academia Española (Royal Spanish Academy) defines the linguistic standards for Spanish in Spain, and its authority is often accepted in the Americas too.

The variants of Spanish spoken in Spain and its former colonies can vary significantly in grammar and pronunciation, as well as in the use of idioms. In general, courses of Spanish as a second language tend to prefer Mexican Spanish in the United States and Canada, whereas European Spanish prevails in Europe.

The most striking difference between dialects in central and northern Spain and Latin American Spanish is distinción (distinction), that is, the pronunciation of the letter z before all vowels, and of c only before e and i, as a voiceless dental fricative /θ/, English th in thing. Thus, in most variations of Spanish from Spain, cinco (five) is pronounced /ˈθinko/ as opposed to /ˈsinko/ in Latin American Spanish, and similarly for zapato, cerdo, zorro, Zurbarán. Distinción also occurs in the area around Cusco, Peru, where [θ] survives in a few words like the numbers doce, trece and, with some people, in the verb decir.

Additionally, all Latin-American dialects drop the familiar (that is, informal) vosotros verb form for the second person plural, using ustedes in all contexts. In most of Spain, ustedes is used only in a formal context. Some other minor differences are:

Also, speakers of the second dialect tend to use words and polite-set expressions that, even if recognized by the Real Academia Española, are not widely used nowadays (some of them are even deemed as anachronisms) by speakers of Castilian Spanish. For example, enojarse and enfadarse are verbs with the same meaning (to become angry), enojarse being used much more in the Americas than in Spain, and enfadarse more in Spain than in the Americas. Below are select vocabulary differences between Spain and other Spanish-speaking countries. Words in bold are completely unique to Spain and not used in any other country (except for perhaps Equatorial Guinea which speaks a very closely related dialect).

1Latin American Spanish consists of several varieties spoken throughout the Americas so the examples may not represent all dialects. They are meant to show contrast and comparing all variants of Latin America as a whole to one variant of Spain would be impossible as the majority of the vocabulary will be reflected in other variant.