Castel del Piano is a town and comune (municipality) of Province of Grosseto in the Tuscany, central Italy.

The area of Castel del Piano is known to have been inhabited in prehistoric times, but the town itself is mentioned for the first time in a document from 890 AD. From 1175 to 1321 it was a possession of the Aldobrandeschi family. After the fall of the Republic of Siena, it became part of the Grand Duchy of Tuscany.

The city is divided into four contrade (quarters) which take part in a palio held every 8 September. The palio was raced for the first time in 1402. 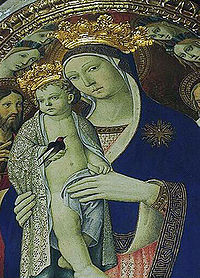 The Virgin Mary and Jesus in the church of Santa Maria delle Grazie.

The municipality is formed by the municipal seat of Castel del Piano and the villages (frazioni) of Montegiovi and Montenero d'Orcia.