It was initially named for Franklin Thomas Backus, a justice of the Ohio Supreme Court, whose widow donated $50,000 to found the school in 1892.[3] 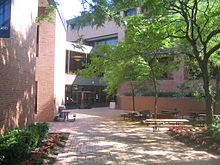 Rear Entrance to the Law School

Front Entrance to the Law School

The school was ranked the 76th by the U.S. News and World Report on its 2021 rankings.[6] U.S. News & World Report has ranked its Health Care Law program ranked tied for 9th in the nation.[7] In addition to the JD curriculum, the law school offers LLM and SJD degrees to lawyers around the world. It also offers an Executive Master of Arts in Financial Integrity and a Masters in Patent Practice.

The student-faculty ratio is 6.8:1.[8] In August 2013, by a near-unanimous vote, the faculty adopted a new curriculum to reflect changes in the legal industry. The model is designed to blend practice, theory, and professionalism in all three years of law school. Students begin working with clients in the first year of law school. Writing and skills courses track the content in their substantive courses to blend theory and practice. Students also learn transactional drafting, financial literacy, and statutory and regulatory analysis during the first year.

During the second year of law school, students specialize and continue to build on the skills they learned during their first year. The law school's concentrations include health care law, international law, national security law, and law, technology, and the arts.

Beginning in 2016, a capstone semester became a hallmark of the third year. All students practice law full-time by working on cases through the Milton A. Kramer Law Clinic Center at the law school or through an externship. Students may do externships in the U.S. or abroad. A select number of students may competitively apply to spend their third year in Europe, completing a foreign LLM degree in addition to their Case JD, at no additional cost.

Students learn leadership through courses developed by faculty at Case Western's Weatherhead School of Management, and students graduate with e-portfolios of their work to share with employers. 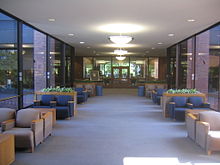 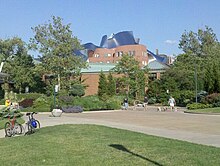 Gund Hall with Peter B. Lewis building in the background

Case Western Reserve's Law School Transparency under-employment score is 27.2%, indicating the percentage of the Class of 2013 unemployed, pursuing an additional degree, or working in a non-professional, short-term, or part-time job nine months after graduation.[10] 88.8% of the Class of 2013 was employed in some capacity while 2.6% were pursuing graduate degrees and 8.6% were unemployed nine months graduation.[5]

Ohio was the primary employment destination for 2013 Case Western Reserve graduates, with 56.8% of employed graduates working in the state.[5] The next two most popular locations for Case Western graduates to accept employment were Washington, DC and New York. In addition, seven graduates from the class of 2013 accepted positions abroad.[11]

The total cost of attendance (indicating the cost of tuition, fees, and living expenses) at Case Western Reserve for the 2014-2015 academic year is $70,372.[12] Case Western Reserve's tuition and fees on average increased by 4.89% annually over the past five years.[13] 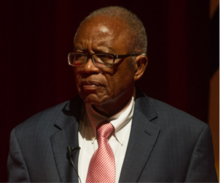 Other Case alumni are involved in the fields of government, business, academia, and the judiciary.