listen)) is a municipality in the Lisbon District of Portugal, located on the Portuguese Riviera. The population in 2011 was 206,479,[1] in an area of 97.40 km2.[2] Cascais is an important tourist destination. Its marina hosts events such as the America's Cup and the town of Estoril, part of the Cascais municipality, hosts conferences such as the Horasis Global Meeting.

Cascais's history as a popular seaside resort originated in the 1870s, when King Luís I of Portugal and the Portuguese royal family made the seaside town their residence every September, thus also attracting members of the Portuguese nobility, who established a summer community there. Cascais is known for the many members of royalty who have lived there, including King Edward VIII of the United Kingdom, King Juan Carlos I of Spain, and King Umberto II of Italy. Exiled Cuban president Fulgencio Batista was also once a resident of the municipality, while it was the Casino Estoril that inspired Ian Fleming's first James Bond novel Casino Royale.[3]

The municipality is one of the wealthiest in both Portugal and the Iberian Peninsula.[4][5][6][7] It has one of the most expensive real estate markets and one of the highest costs of living in the country[8][9][10][11] and is consistently ranked highly for its quality of life.[12][13]

Human settlement of the territory today known as Cascais dates to the late Paleolithic, as indicated by remnants encountered in the north of Talaíde, in Alto do Cabecinho (Tires) and south of Moinhos do Cabreiro.[14] It was during the Neolithic that permanent settlements were established in the region, their inhabitants utilizing the natural grottoes (such as the Poço Velho in Cascais) and artificial shelters (like those in Alapraia or São Pedro) to deposit their dead. The bodies were buried along with offerings, a practice that continued to the Chalcolithic.[14]

Roman interventions in the area occurred with the settlement of the villae of Freiria (today São Domingos de Rana) and Casais Velhos (Charneca), evidence for which includes a group of ten tanks discovered along the Rua Marques Leal Pancada in Cascais, which was the location of a salting factory for fish.[14] Roman dominion over the territory also influenced place names in the region, as was the case with the word "Caparide" (from the Latin capparis, meaning "caper"), as well as several inscriptions associated with funerary graves.[14]

Similarly, Muslim settlers in the region left their mark on local place names, including "Alcoitão" and "Alcabideche", where the romantic poet Ibn Muqana al-Qabdaqi, who wrote of the region's agriculture and windmills, was born at the beginning of the 11th century.[14]

The development of Cascais began in earnest in the 12th century, when it was administratively subordinate to the town of Sintra, located to the north. In its humble beginnings, Cascais depended on the products of the sea and land, but by the 13th century its fish production was also supplying the nearby city of Lisbon. The toponym "Cascais" appears to derive from this period, a plural derivation of cascal (monte de cascas) which signified a "mountain of shells", referring to the abundant volume of marine mollusks harvested from the coastal waters.[14] During the 14th century, the population spread outside the walls of its fortress castle.

The settlement's prosperity led to its administrative independence from Sintra in 1364. On 7 June 1364, the people of Cascais obtained from King Peter I the elevation of the village to the status of town, necessitating the appointment of local judges and administrators. The townspeople were consequently obligated to pay the Crown 200 pounds of gold annually, as well as bearing the expense of paying the local administrators' salaries. Owing to the regions' wealth, these obligations were easily satisfied.[14] The town and the surrounding lands were owned by a succession of feudal lords, the most famous of whom was João das Regras (died 1404), a lawyer and professor of the University of Lisbon who was involved in the ascension of King John I to power as the first King of the House of Aviz.

The castle of Cascais was likely constructed during this period, since by 1370, King Ferdinand had donated the castle and Cascais to Gomes Lourenço de Avelar to hold as a seigneurial fiefdom.[14] These privileges were then passed on to his successors, among them João das Regras and the Counts of Monsanto, and later the Marquess of Cascais.[14] Meanwhile, despite its conquest and sack by Castilian forces in 1373, and blockade of the port in 1382 and 1384, Cascais continued to grow beyond its walls.[14] By the end of the 14th century this resulted in the creation of the parishes of Santa Maria de Cascais, São Vicente de Alcabideche and São Domingos de Rana.[14] 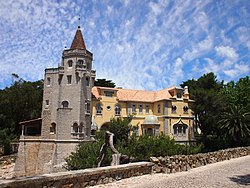 View of the Count's of Castro Guimarães Palace in Cascais, Portugal. 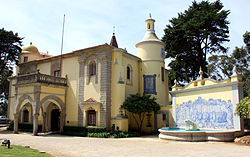 From the Middle Ages onward, Cascais depended on fishing, maritime commerce (it was a stop for ships sailing to Lisbon), and agriculture, producing wine, olive oil, cereals, and fruits. Due to its location at the mouth of the Tagus estuary, it was also seen as a strategic post in the defence of Lisbon. Around 1488, King John II built a small fortress in the town, situated by the sea. On 15 November 1514, Manuel I conceded a foral (charter) to Cascais, instituting the region's municipal authority.[14] It was followed on 11 June 1551 by a license from King John III to institutionalise the Santa Casa da Misericórdia de Cascais.[14] The town's medieval fortress was inadequate to repel invasions, and in 1580 Spanish troops led by the Duque of Alba took the village during the conflict that led to the union of the Portuguese and Spanish crowns. The fortress was enlarged towards the end of the 16th century by King Philip I (Philip II of Spain), turning it into a typical Renaissance citadel with the characteristic flat profile and star-shaped floorplan. Following the Portuguese restoration in 1640, a dozen bulwarks and redoubts were constructed under the direction of the Count of Cantanhede, who oversaw the defences of the Tagus estuary, the gateway to the city of Lisbon.[14] Of these structures, the citadel of Cascais, which was constructed alongside the fortress of Our Lady of Light, considerably reinforced the strategic defences of the coast.[14]

In 1755, the great Lisbon earthquake destroyed a large portion of the city. Around 1774, the Marquis of Pombal, prime-minister of King José I, took protective measures for the commercialisation of the wine of Carcavelos and established the Royal Factory of Wool in the village, which existed until the early 19th century. During the invasion of Portugal by Napoleonic troops in 1807, the citadel of Cascais was occupied by the French, with General Junot staying some time in the village.

The citadel decayed gradually until King Luís I decided to make Cascais into his summer residence. From 1870 to 1908, the Portuguese royal family from the House of Braganza-Saxe-Coburg and Gotha stayed in Cascais to enjoy the sea, turning the quiet fishing village into a cosmopolitan address. Thanks to King Luís, the citadel was equipped with the country's first electric lights in 1878. Cascais also benefited with the construction of better roads to Lisbon and Sintra, a bullfight ring, a sports club, and improvements to basic infrastructure for the population. Many noble families built impressive mansions in an eclectic style commonly referred to as summer architecture, many of which are still to be seen in the town centre and environs. The first railway arrived in 1889. Another important step in the development of the area was made in the first half of the 20th century with the building of a casino and infrastructure in neighbouring Estoril.

In 1882 Cascais installed one of the first tide gauges in Europe in order to assist with navigation into the port of Lisbon. In 1896, King Carlos I, a lover of all maritime activities, installed in the citadel the first oceanographic laboratory in Portugal. The King himself led a total of 12 scientific expeditions to the coast; these ended in 1908 with his assassination in Lisbon.

Due to Portugal's neutrality in World War II and the town's elegance and royal past, Cascais became home to many of the exiled royal families of Europe, including those of Spain (House of Bourbon), Italy (House of Savoy), Hungary and Bulgaria. Their stories are told at the Exiles Memorial Centre.

Nowadays, Cascais and its surroundings are a popular vacation spot for the Portuguese as well as for the international jet set and regular foreign tourists, all of them drawn by its fine beaches. The town hosts many international events, including sailing and surfing. In 2018 it was the European Youth Capital. 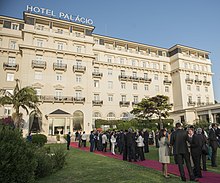 Administratively, the municipality is divided into 4 civil parishes (freguesias),[15] with municipal authority vested in the Câmara Municipal of Cascais:

Guincho Beach and Carcavelos Beach are especially well known as good surf spots. Close to Praia do Guincho is the Cresmina Dune, which is an unstable dune system due to the constant drifting of sand particles caused by strong winds. 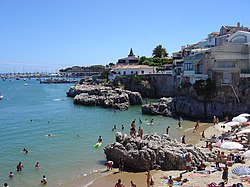 Praia da Rainha (Queen's Beach), a beach in the centre of Cascais.

Cascais is easily reached from Lisbon by car on the A5 Lisbon-Cascais highway, or alternatively on the scenic "marginal" road, as well as by frequent inexpensive commuter trains. Taxis are also a common and inexpensive mode of transport in the area. The city has the ruins of a castle, an art museum and an ocean museum, as well as parks and the charming cobbled streets of the historic centre. The town has many hotels and tourist apartments as well as many good restaurants of varying cost. It is a fine base to use for those visiting Lisbon and its environs who prefer to stay outside of the city yet in an equally urban and sophisticated environment.

Cascais ranks 9th in population density and 6th in percentage of population employed among Portuguese municipalities.[17]

Cascais is surrounded by popular beaches. Guincho Beach to the northwest is primarily a surfing, windsurfing, and kitesurfing beach because of the prevailing winds and sea swells, while the calm waters of the beaches to the east attract sunbathers. The lush Sintra mountains to the north are a further attraction. The shoreline to the west has cliffs, attracting tourists who come for the panoramic views of the sea and other natural sights such as the Boca do Inferno. It is also becoming a popular golf destination, with over 10 golf courses nearby.

A large marina with 650 berths was opened in 1999 and has since held many sailing events. It was the official host of the 2007 ISAF Sailing World Championships for dinghies and racing yachts. The municipality also hosts international tennis and motorcycling events and for many years hosted the FIA F1 Portugal Grand Prix at the Estoril race track. The Estoril Casino is one of the largest in Europe. Near the casino is the "Hotel Palácio" (Palace Hotel), where scenes of the James Bond movie On Her Majesty's Secret Service were shot.

In 2017 the municipality started charging a small tourist tax, as the city had become one of the most visited destinations in Portugal. It is estimated that around 1.2 million tourists stay in the city's hotels each year (2016).[18]

The Estoril community hosts a kindergarten and elementary school campus of the German School of Lisbon.[19]

The Gil Vicente theatre dates back to 1869. In its early years it was frequently attended by Portugal's Royal Family. The Cascais Experimental Theatre was established in 1965 and has presented more than a hundred shows since then. Over the years Cascais has developed several art galleries and museums. These are concentrated in a relatively small area of the town, mainly in parkland. Combined, they are known as The Museum Quarter.[21] Several occupy large buildings that were formerly private residences and were subsequently taken over and restored by the Municipality. Entrance is either free or for a small fee (usually not more than €4). The galleries and museums are:

Cascais is twinned with:[25]

Villa Italia was the abode of the exiled King of Italy for forty years in Cascais. It is now used as a hotel.