Caryophyllales (/ˌkærioʊfɪˈleɪliːz/ KARR-ee-oh-fil-AY-leez)[2] is an order of flowering plants that includes the cacti, carnations, amaranths, ice plants, beets, and many carnivorous plants. Many members are succulent, having fleshy stems or leaves.

The members of Caryophyllales include about 6% of eudicot species.[3] This order is part of the core eudicots.[4] Currently, the Caryophyllales contains 37 families, 749 genera, and 11,620 species[5] The monophyly of the Caryophyllales has been supported by DNA sequences, cytochrome c sequence data and heritable characters such as anther wall development and vessel-elements with simple perforations.[6]

As with all taxa, the circumscription of Caryophyllales has changed within various classification systems. All systems recognize a core of families with centrospermous ovules and seeds. More recent treatments have expanded the Caryophyllales to include many carnivorous plants.

Systematists were undecided on whether Caryophyllales should be placed within the rosid complex or sister to the asterid clade.[6] The possible connection between sympetalous angiosperms and Caryophyllales was presaged by Bessey, Hutchinson, and others; as Lawrence relates: "The evidence is reasonably conclusive that the Primulaceae and the Caryophyllaceae have fundamentally the same type of gynecia, and as concluded by Douglas (1936)(and essentially Dickson, 1936) '...the vascular pattern and the presence of locules at the base of the ovary point to the fact that the present much reduced flower of the Primulaceae has descended from an ancestor which was characterized by a plurilocular ovary and axial placentation. This primitive flower might well be found in centrospermal stock as Wernham, Bessy, and Hutchinson have suggested.' "[7]

Cactaceae native to the middle region of South America, at Marsh Botanical Garden. Cactaceae are a plant family, under the order Caryophyllales.

As circumscribed by the APG III system (2009), this order includes the same families as the APG II system (see below) plus the new families, Limeaceae, Lophiocarpaceae, Montiaceae, Talinaceae, and Anacampserotaceae.[1] 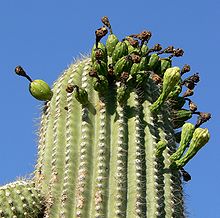 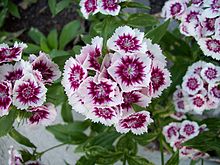 A flower of Dianthus

This represents a slight change from the APG system, of 1998 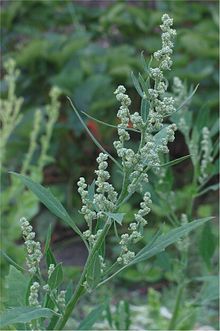 The Cronquist system (1981) also recognised the order, with this circumscription:

The difference with the order as recognized by APG lies in the first place in the concept of "order". The APG favours much larger orders and families, and the order Caryophyllales sensu APG should rather be compared to subclass Caryophyllidae sensu Cronquist.

A part of the difference lies with what families are recognized. The plants in the Stegnospermataceae and Barbeuiaceae were included in Cronquist's Phytolaccaceae. The Chenopodiaceae (still recognized by Cronquist) are included in Amaranthaceae by APG.

New to the order (sensu APG) are the Asteropeiaceae and Physenaceae, each containing a single genus, and two genera from Cronquist's order Nepenthales.

Earlier systems, such as the Wettstein system, last edition in 1935, and the Engler system, updated in 1964, had a similar order under the name Centrospermae.