Wikipedia:Citation needed Doi (identifier) Population dynamics
The maximum population size of the species that the environment can support indefinitely

The specific reason why a population stops growing is known as a limiting or regulating factor.[citation needed] 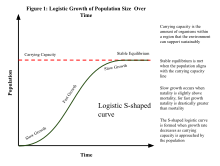 The difference between the birth rate and the death rate is the "natural increase". If the population of a given organism is below the carrying capacity of a given environment, this environment could support a positive natural increase; should it find itself above that threshold the population typically decrease. Thus, the carrying capacity is the maximum number of individuals of a species that an environment can support.[citation needed]

Population size decreases above carrying capacity due to a range of factors depending on the species concerned, but can include insufficient space, food supply, or sunlight. The carrying capacity of an environment may vary for different species.[citation needed]

Carrying capacity was originally used to determine the number of animals that could graze on a segment of land. The idea has recently been applied to humans in the context of environmentalism.[2] For the human population variables such as sanitation and medical care are sometimes considered as part of the environment.[citation needed]

In terms of population dynamics, the concept of carrying capacity was not explicitly used in 1838 by the Belgian mathematician Pierre François Verhulst when he first published his equations based on research on modelling population growth,[3] but was popularised in the 1920 by the American biostatisticians Raymond Pearl and Lowell Reed.[citation needed]

The origins of the English term "carrying capacity" are uncertain, with researchers variously stating that it was used "in the context of international shipping"[4] or that it was first used during 19th-century laboratory experiments with micro-organisms.[5] A recent review finds the first use of the term in an 1845 report by the US Secretary of State to the US Senate.[4]

In the standard ecological algebra as illustrated in the simplified Verhulst model of population dynamics, carrying capacity is represented by the constant K:

where N is the population size, r is the maximum growth rate, K is the carrying capacity of the local environment, and dN/dt, the derivative of N with respect to time t, is the rate of change in population with time. Thus, the equation relates the growth rate of the population N to the current population size, incorporating the effect of the two constant parameters r and K. (Note that decrease is negative growth.) The choice of the letter K came from the German Kapazitätsgrenze (capacity limit).

This equation is a modification of the original Verhulst model:

In this equation, the carrying capacity K,

When the Verhulst model is plotted into a graph, the population change over time takes the form of a sigmoid curve, reaching its highest level at K. This is the logistic growth curve, and it is calculated with:

= the natural logarithm base (also known as Euler's number),

value of the sigmoid's midpoint,

= the logistic growth rate or steepness of the curve.[6]

What determines a specific system's carrying capacity involves a limiting factor which may be something such as available supplies of food, water, nesting areas, space or amount of waste that can be absorbed. Where resources are finite, such as for a population of Osedax on a whale fall or bacteria in a petridish, the population will curve back down to zero after the resources have been exhausted, with the curve reaching its apogee at K. In systems in which resources are constantly replenished, the population will reach its equilibrium at K.[citation needed]

Software is available to help calculate the carrying capacity of a given natural environment.[8]

Several estimates of the carrying capacity of the earth for humans have been made with a wide range of population numbers. A 2001 UN report said that two-thirds of the estimates fall in the range of 4 billion to 16 billion with unspecified standard errors, with a median of about 10 billion.[9] Some of these issues have been studied by computer simulation models such as World3.

The application of the concept of carrying capacity for the human population, which exists in a non-equilibrium, has been criticized for not successfully being able to model the processes between humans and the environment.[10]