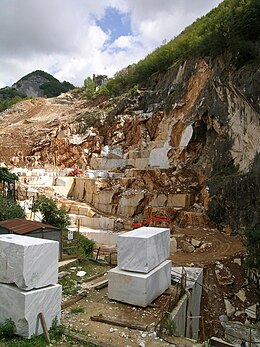 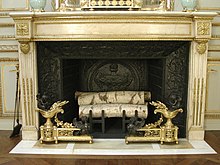 Carrara marble is a type of white or blue-grey marble popular for use in sculpture and building decor. It is quarried in the city of Carrara in the province of Massa and Carrara in the Lunigiana, the northernmost tip of modern-day Tuscany, Italy.

Carrara marble has been used since the time of Ancient Rome[1] and it was called the "Luni marble". In the 17th and 18th centuries, the marble quarries were monitored by the Cybo and Malaspina families who ruled over Massa and Carrara. The family created the "Office of Marble" in 1564 to regulate the marble mining industry.[2] The city of Massa, in particular, saw much of its plan redesigned (new roads, plazas, intersections, pavings) in order to make it worthy of an Italian country's capital.[3] Following the extinction of the Cybo-Malaspina family, the state was ruled by the House of Austria and management of the mines rested with them. The Basilica of Massa is built entirely of Carrara marble and the old Ducal Palace of Massa was used to showcase the precious stone.[4]

By the end of the 19th century, Carrara had become a cradle of anarchism in Italy, in particular among the quarry workers. According to a New York Times article of 1894, workers in the marble quarries were among the most neglected labourers in Italy. Many of them were ex-convicts or fugitives from justice. The work at the quarries was so tough and arduous that almost any aspirant worker with sufficient muscle and endurance was employed, regardless of their background.[5]

The quarry workers and stone carvers had radical beliefs that set them apart from others. Anarchism and general radicalism became part of the heritage of the stone carvers. Many violent revolutionists who had been expelled from Belgium and Switzerland went to Carrara in 1885 and founded the first anarchist group in Italy.[5] In Carrara, the anarchist Galileo Palla remarked, “even the stones are anarchists.”[6] The quarry workers were the main actors of the Lunigiana revolt in January 1894. 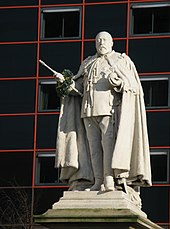 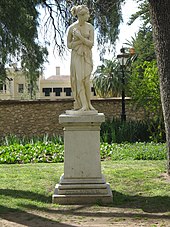 The marble from Carrara was used for some of the most remarkable buildings in Ancient Rome:

It was also used in many sculptures of the Renaissance including Michelangelo's David (1501–1504)[1][7] whilst the statue to Robert Burns, which commands a central position in Dumfries, was carved in Carrara by Italian craftsmen working to Amelia Robertson Hill's model. It was unveiled by future UK Prime Minister Archibald Primrose, 5th Earl of Rosebery on 6 April 1882.[8] Other notable occurrences include:

Carrara marble has been designated by the International Union of Geological Sciences as a Global Heritage Stone Resource.[10]

The Apuan Alps above Carrara show evidence of at least 650 quarry sites, with about half of them currently abandoned or worked out.[11] The Carrara quarries have produced more marble than any other place on earth.

Working the quarries has been dangerous and continues so to this day[when?]. In September 1911, a collapsing cliff face at the Bettogli Quarry crushed 10 workers who were on lunch break under a precipice. A 2014 video made at a Carrara quarry shows workers with missing fingers, and workers performing hazardous, painfully noisy work who are not wearing protective gear of any kind.[12]

The prize yield from Carrara quarries through millennia has been Statuario, a pure white marble (coloring in other marbles arises from intermixture with other minerals present in the limestone as it is converted to marble by heat or pressure). However, by the end of the 20th century, the known deposits of Statuario near Carrara are played out. The quarries continue to remove and ship up to a million tons/year of less-esteemed marble, mostly for export.

Bianco Carrara classified in C and CD variations as well as Bianco Venatino and Statuarietto are by far the most common types with more expensive exotic variations such as Calacatta Gold, Calacatta Borghini, Calacatta Macchia Vecchia, Arabescato Cervaiole and Arabescato Vagli quarried throughout the Carrara area.

Use in isotopic standard

Calcite, obtained from an 80 kg sample of Carrara marble,[13] is used as the IAEA-603 isotopic standard in mass spectrometry for the calibration of δ18O and δ13C.[14]

The black yeast Micrococcus halobius can colonize Carrara marble by forming a biofilm and producing gluconic, lactic, pyruvic and succinic acids from glucose, as seen in the Dionysos Theater of the Acropolis in Athens.[15]