María Carolina Barco Isakson (born 1951)[1] is a Colombian-American diplomat, who has served as Ambassador of Colombia to the United States from 2006 to 2010, and Minister of Foreign Affairs of Colombia from 2002 to 2007. She has served as the colombian ambassador to Spain since october 2018.

Barco was born in Boston, Massachusetts, while her father, Virgilio Barco Vargas, was studying at the Massachusetts Institute of Technology. In 1973 Barco received her BA in Sociology and Economics from Wellesley College in Massachusetts. During her time at Wellesley she spent a year studying abroad at the Université Libre de Bruxelles in Belgium. In 1975 she received a master's degree in city planning from the Harvard University Graduate School of Design. In 1984 she received an MBA at the Instituto de Empresas in Madrid, Spain. From 1990 to 1991 she was a visiting scholar at her father's alma mater, MIT. 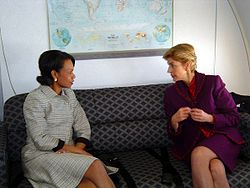 Barco was appointed Foreign Minister of Colombia by President Álvaro Uribe in August 2002 and remained in that post until July 2006, when she was appointed Ambassador to the United States, replacing former Colombian president Andrés Pastrana Arango in Washington, D.C..

Carolina Barco was married to Mauricio Botero Caicedo, with whom she had three daughters.