The Carnegie Endowment for International Peace (CEIP) is a foreign-policy think tank with centers in Washington D.C., Moscow, Beirut, Beijing, Brussels, and New Delhi.[1] The organization describes itself as being dedicated to advancing cooperation between nations and promoting active international engagement by the United States. Founded in 1910 by Andrew Carnegie, its work is not formally associated with any political party of the United States.

Its headquarters building, prominently located on the Embassy Row section of Massachusetts Avenue, was completed in 1989 on a design by architecture firm Smith, Hinchman & Grylls. It also hosts the embassy of Papua New Guinea in the U.S. 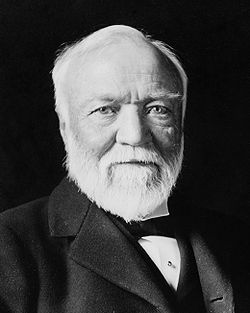 Industrialist and philanthropist Andrew Carnegie in 1913.

Andrew Carnegie, like other leading internationalists of his day, believed that war could be eliminated by stronger international laws and organizations. "I am drawn more to this cause than to any," he wrote in 1907. Carnegie's single largest commitment in this field was his creation of the Carnegie Endowment for International Peace.[8]

On his seventy-fifth birthday, November 25, 1910, Andrew Carnegie announced the establishment of the Endowment with a gift of $10 million worth of first mortgage bonds, paying a 5% rate of interest.[9] The interest income generated from these bonds was to be used to fund a new think tank dedicated to advancing the cause of world peace. In his deed of gift, presented in Washington on December 14, 1910, Carnegie charged trustees to use the fund to "hasten the abolition of international war, the foulest blot upon our civilization", and he gave his trustees "the widest discretion as to the measures and policy they shall from time to time adopt" in carrying out the purpose of the fund.[10]

At the outset of America's involvement in World War I in 1917, the Carnegie Endowment trustees unanimously declared, "the most effective means of promoting durable international peace is to prosecute the war against the Imperial Government of Germany to final victory for democracy."[11] In December 1918, Carnegie Endowment Secretary James Brown Scott and four other Endowment personnel, including James T. Shotwell, sailed with President Woodrow Wilson on the USS George Washington to join the peace talks in France.

Carnegie is often remembered for having built Carnegie libraries, which were a major recipient of his largesse. The libraries were usually funded not by the Endowment but by other Carnegie trusts, operating mainly in the English-speaking world. However, after World War I the Endowment built libraries in Belgium, France[12] and Serbia in three cities which had been badly damaged in the war. In addition, in 1918, the Carnegie Endowment for International Peace (CEIP) began to support a library special collection called the International Mind Alcove program which aimed to change people's global perspective, fostering an 'international mind' in America as well as in other countries.[13] The foundational idea behind the program was that internationalism would replace nationalism and people would be more inclined toward peace once they had a greater understanding of different cultures. This program was established in 1918 after World War I and by 1924 had grown significantly, “with eighty-one collections in the US and twenty-two in other countries”.[13] After the US entered World War II, the International Mind Alcove collections were “repackaged” to support the state, although the collection didn’t change.[13] After World War II, the United Nations began promoting the idea of internationalism, eventually leading the CEIP to end the International Mind Alcove program.[13] Early in the 1950s, the CEIP came under scrutiny by the US Congress for subversive activities during the anti-communist atmosphere at that time. Mainly, the Alcove project and the books that were disseminated under this international program were the focus of the investigation. The books were reviewed by a political science professor, who concluded that the books did not “promote the national interest”.[13] At that point it was irrelevant since the program was being eliminated, but the findings supported the charge of subversion, stating the idea of internationalism contributes to the “degradation of American ‘nationalism’”. By 1958 the CEIP had ended funding for the program, ending its mission, completely unrelated to the Congressional investigation.[13]

On July 14, 1923, the Hague Academy of International Law, an initiative of the Endowment, was formally opened in the Peace Palace at The Hague. The Peace Palace had been built by the Carnegie Foundation (Netherlands) in 1913 to house the Permanent Court of Arbitration and a library of international law.

In 1925, Nicholas Murray Butler succeeded Elihu Root as president of the Endowment.[14] For his work, including his involvement with the Kellogg–Briand Pact, Butler was awarded the Nobel Peace Prize in 1931.[15]

In November 1944, the Carnegie Endowment published Raphael Lemkin's Axis Rule in Occupied Europe: Laws of Occupation—Analysis of Government—Proposals for Redress. The work was the first to bring the word genocide into the global lexicon.[16] In April 1945, James T. Shotwell, director of the Carnegie Endowment's Division of Economics and History, served as chairman of the semiofficial consultants to the U.S. delegation at the San Francisco conference to draw up the United Nations Charter.[17] As chairman, Shotwell pushed for an amendment to establish a permanent United Nations Commission on Human Rights, which exists to this day.

In December 1945, Butler stepped down after twenty years as president and chairman of the board of trustees. Butler was the last living member of the original board selected by Andrew Carnegie in 1910.[18] John Foster Dulles was elected to succeed Butler as chairman of the Board of Trustees, where he served until fellow board member Dwight D. Eisenhower was elected president of the U.S. in 1952 and appointed Dulles Secretary of State.[18]

In 1946, Alger Hiss succeeded Butler as president of the Endowment but resigned in 1949 after being denounced as a communist and a spy by Whittaker Chambers and on December 15, 1948, indicted by the United States Department of Justice on two counts of perjury. Hiss was replaced in the interim by James T. Shotwell.

In 1947, the Carnegie Endowment's headquarters were moved closer to the United Nations in New York City, while the Washington office at Peter Parker House (700 Jackson Pl., NW) became a subsidiary branch.[11]

In 1950, the Endowment board of trustees appointed Joseph E. Johnson, a historian and former State Department official, to take the helm.

In 1963, the Carnegie Endowment reconstituted its International Law Program in order to address several emerging international issues: the increase in significance and impact of international organizations; the technological revolution that facilitated the production of new military weaponry; the spread of Communism; the surge in newly independent states; and the challenges of new forms of economic activity, including global corporations and intergovernmental associations. The program resulted in the New York-based Study Group on the United Nations and the International Organization Study Group at the European Centre in Geneva.[11] In 1970, Thomas L. Hughes became the sixth president of the Carnegie Endowment. Hughes moved the Endowment's headquarters from New York to Washington, D.C., and closed the Endowment's European Centre in Geneva.

The Carnegie Endowment acquired full ownership of Foreign Policy magazine in the spring of 1978. The Endowment published Foreign Policy for 30 years, moving it from a quarterly academic journal to a bi-monthly glossy covering the nexus of globalization and international policy. The magazine was sold to The Washington Post in 2008.

In 1991, Morton Abramowitz was named the seventh president of the Endowment. Abramowitz, previously a State Department official, focused the Endowment's attention on Russia in the post-Soviet era.[11] In this spirit, the Carnegie Endowment opened the Carnegie Moscow Center in 1994 as a home of Russian scholar-commentators.[19]

Jessica Mathews joined the Carnegie Endowment as its eighth president in May 1997. Under her leadership, Carnegie's goal was to become the first multinational/global think tank.[20]

As first laid out with the Global Vision in 2007, the Carnegie Endowment aspired to be the first global think tank.[21] Jessica Mathews said that her aim was to make Carnegie the place that brings what the world thinks into thinking about U.S. policy and to communicate that thinking to a global audience.[18] During Mathews' tenure as president, the Carnegie Endowment launched the Carnegie Middle East Center in Beirut (2006), Carnegie Europe in Brussels (2007), and the Carnegie-Tsinghua Center at the Tsinghua University in Beijing (2010). Additionally, in partnership with the al-Farabi Kazakh National University, Carnegie established the Al-Farabi Carnegie Program on Central Asia in Kazakhstan in late 2011.

William J. Burns, is the current president of the Carnegie Endowment.

In 1993, the Endowment launched the Carnegie Moscow Center, with the belief that "in today's world a think tank whose mission is to contribute to global security, stability, and prosperity requires a permanent presence and a multinational outlook at the core of its operations."[27]

The Center's stated goals are to embody and promote the concepts of disinterested social science research and the dissemination of its results in post-Soviet Russia and Eurasia; to provide a free and open forum for the discussion and debate of critical national, regional and global issues; and to further cooperation and strengthen relations between Russia and the United States by explaining the interests, objectives and policies of each.[19] From 2006 until December 2008, the Center was led by current United States Assistant Secretary of State for Verification, Compliance, and Implementation Rose Gottemoeller. The Center is currently headed by Dmitri Trenin, its first Russian director.

The Carnegie Middle East Center was established in Beirut, Lebanon in November 2006. The Center aims to better inform the process of political change in the Arab Middle East and deepen understanding of the complex economic and security issues that affect it. As of 2016[update], the current managing director of the Center is Maha Yahya.[28]

Founded in 2007 by Fabrice Pothier, Carnegie Europe is the European centre of the Carnegie Endowment for International Peace. From its newly expanded presence in Brussels, Carnegie Europe combines the work of its research platform with the fresh perspectives of Carnegie's centres in Washington, Moscow, Beijing, and Beirut, bringing a unique global vision to the European policy community. Through publications, articles, seminars, and private consultations, Carnegie Europe aims to foster new thinking on the daunting international challenges shaping Europe's role in the world.[29]

The Carnegie-Tsinghua Center for Global Policy was established at Tsinghua University in Beijing in 2010. The Center's focuses include China's foreign relations; international economics and trade; climate change and energy; nonproliferation and arms control; and other global and regional security issues such as North Korea, Afghanistan, Pakistan, and Iran.[31]

The current director of the Center is Paul Haenle.

In April 2016, Carnegie India opened in New Delhi, India. The Center's focuses include the political economy of reform in India, foreign and security policy, and the role of innovation and technology in India's internal transformation and international relations.[24] The current director of the Center is Rudra Chaudhuri.