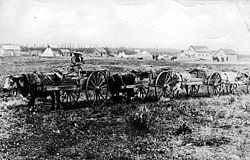 The Carlton Trail was the primary land transportation route in the Canadian Northwest for most of the 19th century, connecting Fort Carlton to Edmonton along a line of intermediate places. It was part of a trail network that stretched From the Red River Colony through Fort Ellice and today's Fort Qu'Appelle, Saskatchewan. From there the trail ran north and crossed the South Saskatchewan River near Batoche, Saskatchewan and reached Fort Carlton on the North Saskatchewan River. From there, it ran west along the northside of the river to Fort Edmonton at what is now Edmonton, Alberta. The distance in total the trail traveled between Fort Garry (Winnipeg) to Upper Fort des Prairies (Edmonton) was approximately 900 miles (1,450 km). Many smaller trails jutted off from the main trail, such as the Fort à la Corne Trail in the Saskatchewan Valley.

Connecting the west, the trail was of great importance during the 19th century as a highway for the inhabitants. Different sections of the trail were known by many different names in different eras, including The Company, Saskatchewan, Fort Ellice Trail, Winnipeg Trail, Edmonton Trail, and Victoria Trail. It is said that if one were to travel the Carlton Trail by Red River Ox Cart it would take about two months.

The main mode of transport along the trail was by horse-drawn Red River Cart. It was an integral route for Métis freighters, and Hudson's Bay Company employees as well as the earliest white settlers. With the construction of the Canadian Pacific Railway in the late 1880s across the southern Prairies, and the numerous branch lines that followed, such as the Calgary and Edmonton Railway, the trail decreased in importance. By the early 1900s many portions of its length had been fenced off where it bisected plots of agricultural land, but sections of the trail, such as Victoria Trail in Edmonton and a length near Victoria Settlement, remain in use to this day.

The use of the trail was designated an Event of National Historic Significance in 1972.[1]