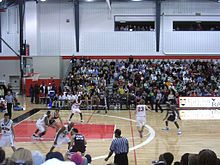 The Carleton Ravens are the athletic teams that represent Carleton University in Ottawa, Ontario. The most notable sports team for Carleton is the men's basketball team. In men's basketball, the Ravens have won 15 of the last 18 national men's championships, more than any top division college in Canada or the United States.[1] The Ravens went on an 87-game winning streak from 2003 to 2006. They also had a 54-game home winning streak. The Ravens finished 2nd in the World University Basketball Championships in 2004.

Outside basketball, the Ravens are the current Women's Curling national champions, earning silver at the Winter Universiade Granada in 2015.[2] They are also the Men's Water Polo and Men's Fencing provincial champions. The Men's Hockey team also placed 3rd in the province and made an appearance at nationals. Carleton participates in the Ontario University Athletics (OUA) Conference for all varsity sports, except the Women's Hockey and Rugby teams who play in Quebec Student Sport Federation (RSEQ).

Rivalry with the Gee-Gees

Carleton's biggest rivals are the Ottawa Gee-Gees of the University of Ottawa. An annual football game, known as the Panda Game is played between the cross-town rivals. It is the most well known rivalry game in Canadian collegiate football[citation needed]. Since its inception in 1955, the Gee-Gees have won 33 to Carleton's 13. From 1998 to 2012, Carleton did not have a football program so the Panda Game was not held.

Today, the rivalry is also extremely heated between the schools' basketball teams, as both universities have men's and women's teams that finish near the top of the standings. On January 23, 2007, the two men's basketball teams faced off at Scotiabank Place, now known as Canadian Tire Centre, in front of nearly 9,720 spectators, which was a record crowd for a regular season U Sports basketball game. The Ottawa Gee-Gees won the inaugural event 64–62. The event, now known as the Capital Hoops Classic, has been expanded to include the women's teams as well, with the Classic featuring a doubleheader of both teams. The January 28, 2009 edition of the game broke the 2007 record with 10,523 fans attending the two games, with both of Carleton's teams posting victories over Ottawa.[3] In the 2013–14 season the teams faced each other both in the provincial and national finals, with uOttawa winning the OUA championship and Carleton winning the national title. In 2014-15, the two teams also faced off in national championship games, with Carleton once again winning.

Carleton's women's basketball program has become one of the most competitive in Canada, winning their first National Championship in 2018.[4]

The women's field hockey team has not participated in U Sports since 2010.

The Carleton Ravens football team returned to the Ontario University Athletics football conference in 2013 after a 15-year absence.[6] The team plays at Keith Harris Stadium and is led by head coach Steve Sumarah.[7] In 2013, Sumarah predicted his team would play in the semi-finals within four years, and in 2016 the team accomplished that goal.[8]

Historically, the Ravens football team first began play just after the Second World War in 1945 and was in continuous operation until the program was dropped in 1998.[9] While the team had some success in the mid-1980s, poor performances and a plan by the Carleton Athletic department to invest more funds in other sports led to the sport being cut after the 1998 season.[10][11] In their history, the Ravens won one Dunsmore Cup conference championship in 1985, but lost in the following Western Bowl to the Calgary Dinos 56 to 14.[12]

Carleton during 2013-14 season vs. Windsor Lancers.

Former NHL hockey player Shaun Van Allen has led Carleton as head coach since the fall of 2017, when he took the program over from previous head coach Marty Johnston. Under Van Allen, the Ravens program has continued to be a consistently-.500 team into a perennial threat in the OUA's Eastern Conference. Despite a plethora of regular-season success, the program has repeatedly been handed early playoff exits by the arch-rival UQTR Patriotes. The Ravens overcame the Patriotes in the 2019 playoffs en route to winning the OUA Bronze medal.

Carleton also has a soccer team. In 2002, the team lost the finals 1–0 in OT to the Brock Badgers. They were OUA champions again in 2005, but lost in the quarter-finals of the national championships. In 2012, the Ravens men's soccer team advanced to CIS (now U Sports) Nationals and finished in 6th place at the CIS Championship Finals.

Despite having successful regular seasons, the women's soccer team has had little success in the playoffs.

Men's golf has had a long history at Carleton. Despite many strong individual performances the Ravens have struggled to find team success at the OUA stage.