Countries by carbon dioxide emissions in thousands of tonnes per annum, via the burning of fossil fuels (blue the highest and green the lowest). Based on levels in 2006. 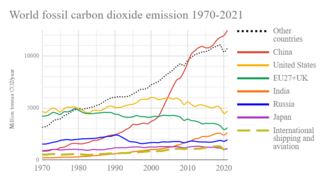 The data only consider carbon dioxide emissions from the burning of fossil fuels and cement manufacture, but not emissions from land use, land-use change and forestry. Emissions from international shipping or bunker fuels are also not included in national figures,[1] which can make a large difference for small countries with important ports. When carbon dioxide emissions from land-use change are factored in, the majority of carbon emissions since 1905 occurred in Asia, Central and Southern America, reflecting the fact that developed nations cleared their forests in earlier centuries.[citation needed] Land-use factors have contributed nearly a third of total cumulative anthropogenic emissions of carbon dioxide since 1850, and until as recently as 1965 was actually a greater source of emissions than the combustion of fossil fuels and production of cement.[2] The methodology for the calculations is public.[3]

The top 10 largest emitter countries account for 67.6% of the world total. Since 2006, China has been emitting more CO
2 than any other country,[4][5][6][7][8] but all being equal, to make a fair comparison of contributions, emissions in terms of CO2 per person have to be made.[9] When looking at CO
2 emissions per person, China's levels are less than half those of the United States (the next largest source of CO
2 emissions) and about one eighth of Palau (the biggest CO
2 emitter per person).[10]

Territorial-based emissions do not account for global trade, where emissions may be imported or exported in the form of traded goods. Accordingly, a proportion of the CO
2 produced and reported in Asia and Eastern Europe is for the production of goods consumed in Western Europe and North America.[11]

According to the review of the scientific literature conducted by the Intergovernmental Panel on Climate Change (IPCC), carbon dioxide is the most important anthropogenic greenhouse gas.[12] The other major anthropogenic greenhouse gases (methane, nitrous oxide (N2O) and some fluorinated gases (sulfur hexafluoride (SF6), hydrofluorocarbons (HFCs), and perfluorocarbons (PFCs))[13]:147[14]), are not included in the following list, nor are humans emissions of water vapor (H2O), the most important greenhouse gas, as they are negligible compared to naturally occurring quantities.[15]