A caravanserai (or caravansary; /kærəˈvænsəˌraɪ/)[1] was a roadside inn where travelers (caravaners) could rest and recover from the day's journey.[2] Caravanserais supported the flow of commerce, information and people across the network of trade routes covering Asia, North Africa and Southeast Europe, most notably the Silk Road.[3][4] Although many were located along rural roads in the countryside, urban versions of caravanserais were also historically common in cities throughout the Islamic world, though they were often called by other names such as khan, wikala, or funduq.[5] 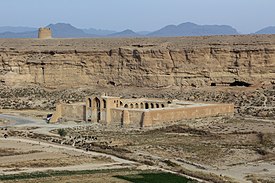 The word کاروانسرای kārvānsarāy is a Persian compound word combining kārvān "caravan" with sarāy "palace", "building with enclosed courts".[6][3] Here "caravan" means a group of traders, pilgrims or other travellers, engaged in long-distance travel. The word is also rendered as caravansary, caravansaray, caravanseray, caravansara, and caravansarai.[4] In scholarly sources, it is often used as an umbrella term for multiple related types of commercial buildings similar to inns or hostels, whereas the actual instances of such buildings had a variety of names depending on the region and the local language.[5] However, the term was typically preferred for rural inns built along roads outside of city walls.[7]

The word serai is sometimes used with the implication of caravanserai. A number of place-names based on the word sarai have grown up: Mughal Serai, Sarai Alamgir and the Delhi Sarai Rohilla railway station for example, and a great many other places are also based on the original meaning of "palace".[citation needed]

The word khan (خان) derives from Middle Persian hʾn' (xān, “house”).[8][5] It typically referred to an "urban caravanserai" built within a town or a city.[5][9] In Turkish the word is rendered as han.[5] The same word was used in Bosnian, having arrived through Ottoman conquest. In addition to Turkish and Persian, the term was widely used in Arabic as well, and examples of such buildings are found throughout the Middle East and as early from as early as the Ummayyad period.[5][9] 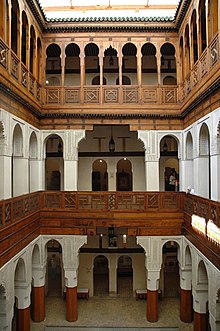 The term funduq (Arabic: فندق‎; sometimes spelled foundouk or fondouk from the French transliteration) is frequently used for historic inns in Morocco and around western North Africa.[5] The word comes from Greek pandocheion, lit.: "welcoming all",[10][5] thus meaning 'inn', led to funduq in Arabic (فندق), pundak in Hebrew (פונדק), fundaco in Venice, fondaco in Genoa and alhóndiga[11] in Spanish. In the cities of this region such buildings were also frequently used as housing for artisan workshops.[12][13][14]:318

The Arabic word wikala (وكالة), sometimes spelled wakala or wekala, is a term found frequently in historic Cairo for an urban caravanserai which housed merchants and their goods and served as a center for trade, storage, transactions and other commercial activity.[15] The word wikala means roughly "agency" in Arabic, in this case a commercial agency,[15] which may also have been a reference to the customs offices that could be located here to deal with imported goods.[16] The term khan was also frequently used for this type of building in Egypt.[5] 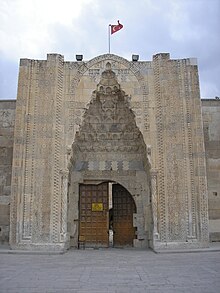 The entrance portal of the Sultan Han (13th century) near Aksaray, Turkey

Caravanserais were a common feature not only along the Silk Road, but also along the Achaemenid Empire's Royal Road, a 2,500-kilometre-long (1,600 mi) ancient highway that stretched from Sardis to Susa according to Herodotus: "Now the true account of the road in question is the following: Royal stations exist along its whole length, and excellent caravanserais; and throughout, it traverses an inhabited tract, and is free from danger."[17] Other significant urban caravanserais were built along the Grand Trunk Road in the Indian subcontinent, especially in the region of Mughal Delhi and Bengal Subah.

Throughout most of the Islamic period (7th century and after), caravanserais were a common type of structure both in the rural countryside and in dense urban centers across the Middle East, North Africa, and Ottoman Europe.[5] A number of 12th to 13th-century caravanserais or hans were built throughout the Seljuk Empire, many examples of which have survived across Turkey today[18][19] (e.g. the large Sultan Han in Aksaray Province) as well as in Iran (e.g. the Ribat-i Sharaf in Khorasan). Urban versions of caravanserais also became important centers of economic activity in cities across these different regions of the Muslim world, often concentrated near the main souq areas, with many examples still standing in the historic areas of Damascus, Aleppo, Cairo, Istanbul, Fes, etc.[20][21][22][23][14]

In many parts of the Muslim world, caravanserais also provided revenues that were used to fund charitable or religious functions or buildings. These revenues and functions were managed through a waqf, a protected agreement which gave certain buildings and revenues the status of mortmain endowments guaranteed under Islamic law.[24][25][26] Many major religious complexes in the Ottoman and Mamluk empires, for example, either included a caravanserai building (like in the külliye of the Süleymaniye Mosque in Istanbul) or drew revenues from one in the area (such as the Wikala al-Ghuri in Cairo, which was built to contribute revenues for the nearby complex of Sultan al-Ghuri).[23][27][28]

Al-Muqaddasi the Arab geographer wrote in 985 CE about the hostelries, or wayfarers' inns, in the Province of Palestine, a province at that time listed under the topography of Syria, saying: "Taxes are not heavy in Syria, with the exception of those levied on the Caravanserais (Fanduk); Here, however, the duties are oppressive..."[29] The reference here being to the imposts and duties charged by government officials on the importation of goods and merchandise, the importers of which and their beasts of burden usually stopping to take rest in these places. Guards were stationed at every gate to ensure that taxes for these goods be paid in full, while the revenues therefrom accruing to the Fatimid kingdom of Egypt. 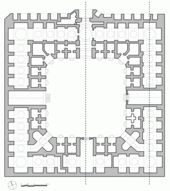 A sample floor plan of a Safavid Empire-era caravanserai in Karaj, Iran 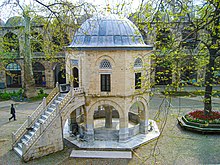 The courtyard of the Koza Han (1490-91) of Bursa, Turkey; the domed building is a small mosque (mescit)

Most typically a caravanserai was a building with a square or rectangular walled exterior, with a single portal wide enough to permit large or heavily laden beasts such as camels to enter. The courtyard was almost always open to the sky, and the inside walls of the enclosure were outfitted with a number of identical animal stalls, bays, niches or chambers to accommodate merchants and their servants, animals, and merchandise.[30]

Caravanserais provided water for human and animal consumption, washing and ritual purification such as wudu and ghusl. Sometimes they had elaborate public baths (hammams), or other attached amenities such as a fountain or a sabil/sebil. They also kept fodder for animals and had shops for travellers where they could acquire new supplies. In addition, some shops bought goods from the travelling merchants.[31] Many caravanserais were also equipped with small mosques, such as the elevated examples in the Seljuk and Ottoman caravanserais in Turkey.[23][32][22] 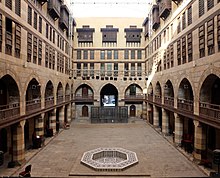 Wikala of Sultan al-Ghuri (1504-05), one of the best-preserved examples in Cairo

In Cairo, starting in the Burji Mamluk period, wikalas (urban caravanserais) were frequently several stories tall and often included a rab', a low-income rental apartment complex, which was situated on the upper floors while the merchant accommodations occupied the lower floors.[33][21] In addition to making the best use of limited space in a crowded city, this also provided the building with two sources of revenue which were managed through the waqf system.[25][34]