The CarGoTram is a freight tram in Dresden, Germany. It supplies Volkswagen's "Transparent Factory" with parts for car assembly. 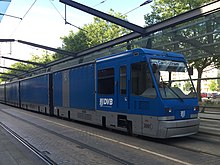 CarGoTram run by Volkswagen in Dresden. Trams operated by the service are used to carry freight, as opposed to passengers.

The idea of building a "transparent factory" for Volkswagen automobile production in Dresden arose in 1997. On 3 March 2000, Dresdner Verkehrsbetriebe AG (DVB AG, Dresden Public Transport Co.) and Volkswagen Automobil-Manufaktur Dresden GmbH signed a contract for the CarGoTram. Car parts were to be transported by tram from the logistics center in Dresden Friedrichstadt to the new factory, using infrastructure normally used for passenger trams. The 4 km (2.5 mi) long route from the logistics center to the factory ran straight through the inner city of Dresden; the use of trucks would have caused an increase of traffic in the city.

Two CarGoTrams were built by Schalker Eisenhütte Maschinenfabrik GmbH Gelsenkirchen, at a cost of 6.5 million Deutsche Mark each.

The freight tram was officially introduced in Dresden on 16 November 2000 and had its first test run on 3 January 2001.

CarGoTram runs every hour. If necessary, it can run every 40 minutes. Several different routes are used. The main route goes from the logistics center in Friedrichstadt via Postplatz and Grunaer Straße to Straßburger Platz and finally on to the factory. If there is heavy traffic, the tram can also take route via the main station or other routes.

The CarGoTram is a bidirectional vehicle consisting of 5 segments. The standard formation is three freight units and two combination freight/control units. The control cars have less capacity (7,500 kg or 16,500 lb) than the middle cars (15,000 kg or 33,000 lb), because of space devoted to the driver’s cab. Total capacity is the equivalent of three trucks (214 m3 or 7,600 cu ft).

The running gear for the tram was recycled from out-of-service Tatra trams, mostly Tatra T4. The bodies were newly built.

All axles of the control car as well as the middle cars were driven.