The Capture of Rome (Italian: Presa di Roma) on September 20, 1870, was the final event of the long process of Italian unification also known as the Risorgimento, marking both the final defeat of the Papal States under Pope Pius IX and the unification of the Italian peninsula under King Victor Emmanuel II of the House of Savoy.

The capture of Rome ended the approximate 1,116-year reign (AD 754 to 1870) of the Papal States under the Holy See and is today widely memorialized throughout Italy with the Via XX Settembre street name in virtually every considerable town.

Camillo Benso, Count of Cavour[2] died soon after the proclamation of Italian national unity, leaving to his successors the solution of the knotty Venetian and Roman problems. The Austrians were still in Venetia and the pope was still in Rome. Cavour had firmly believed that without Rome as the capital, Italy's unification would be incomplete; for the historic position of the Eternal City, with its immortal memories, was such that Italians could not allow another power to possess it.[3] "To go to Rome", said his successor, Ricasoli, "is not merely a right; it is an inexorable necessity." In regard to the future relations between church and state, Cavour's famous dictum was, "A free Church in a free State"; by which he meant that the former should be entirely free to exercise her spiritual powers and leave politics entirely to the latter.[3] 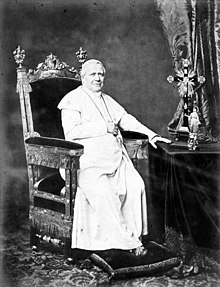 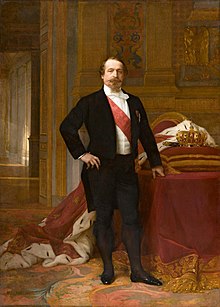 Napoleon III around 1865, by Alexandre Cabanel

During the Second Italian War of Independence, much of the Papal States had been conquered by the Piedmontese Army, and the new unified Kingdom of Italy was created in March 1861, when the first Italian Parliament met in Turin. On March 27, 1861, the Parliament declared Rome the capital of the Kingdom of Italy. However, the Italian government could not take its seat in Rome because it did not control the territory. Also, a French garrison was maintained in the city by Emperor Napoleon III in support of Pope Pius IX, who was determined not to hand over temporal power in the States of the Church.

In July 1870, at the very last moment of the Church's rule over Rome, the First Vatican Council was held in the city, affirming the doctrine of papal infallibility.

In July 1870, the Franco-Prussian War began, and by early August, Napoleon III recalled his garrison from Rome. The French not only needed the troops to defend their homeland, but were concerned that Italy might use the French presence in Rome as a pretext to joint the war against France. In the earlier Austro-Prussian War, Italy had allied with Prussia, and Italian public opinion favored the Prussian side at the start of the Franco-Prussian War. The removal of the French garrison eased tensions between France and Italy, which remained neutral.

With the French no longer manning the Pope's walls, widespread public demonstrations demanded that the Italian government take Rome. But the city remained formally under French protection, and an attack would still have been regarded as an act of war against the French Empire. Furthermore, Prussia had gone to war in an uneasy alliance with the Catholic South German states that it had fought against (alongside Italy) just four years earlier. Although Prussian prime minister Otto von Bismarck was no friend of the papacy, he knew any war that put Prussia and the Holy See in opposing alliances would upset the delicate pan-German coalition needed for German unification. For both Prussia and Italy, any misstep that broke the pan-German coalition risked Austro-Hungarian intervention in a wider European conflict.

Above all else, Bismarck made every diplomatic effort to keep Prussia's conflicts of the 1860s and 1870s localized and prevent them from spiraling out of control into a general European war. Therefore, not only was Prussia unable to offer any sort of alliance with Italy against France, but actually pressured Italy to remain neutral and keep the peace on the Italian peninsula, at least until Prussia's conflict with France had passed. Moreover, the French Army was still regarded as the strongest in Europe – and until events elsewhere took their course, the Italians were unwilling to provoke Napoleon.

It was only after the surrender of Napoleon and his army at the Battle of Sedan that the situation changed radically. The French Emperor was deposed and forced into exile. The best French units had been captured by the Germans, who quickly followed up their success at Sedan by marching on Paris. Faced with a pressing need to defend its capital with its remaining forces, the new French government was clearly not in a military position to retaliate against Italy. In any event, the new government was far less sympathetic to the Holy See and did not possess the political will to protect the Pope's position.

Subsequently, the new democratic French government suffering under the harsh German peace terms provoked Italian public sympathy, and the prospect of a conflict on the Italian peninsula provoking foreign intervention all but vanished.[citation needed]

King Victor Emmanuel II sent Count Gustavo Ponza di San Martino to Pius IX quietly offering a face-saving proposal that agreed to the peaceful entry of the Italian Army into Rome, under the guise of protecting the pope. Along with this letter, the count carried Lanza's document setting out ten articles as the basis of an agreement between Italy and the Holy See.

The Pope would retain his sovereign inviolability and prerogatives. The Leonine City would remain "under the full jurisdiction and sovereignty of the Pontiff". The Italian state would guarantee the pope's freedom to communicate with the Catholic world, as well as diplomatic immunity both for papal nuncios and envoys in foreign lands and for foreign diplomats at the Holy See. The government would supply a permanent annual fund for the pope and the cardinals, equal to the amount currently assigned to them by the budget of the pontifical state, and would assume all papal civil servants and soldiers onto the state payroll, with full pensions as long as they were Italian.[4]

According to Raffaele De Cesare:

The Pope's reception of San Martino [September 10, 1870] was unfriendly. Pius IX allowed violent outbursts to escape him. Throwing the King's letter upon the table he exclaimed, "Fine loyalty! You are all a set of vipers, of whited sepulchres, and wanting in faith." He was perhaps alluding to other letters received from the King. After, growing calmer, he exclaimed: "I am no prophet, nor son of a prophet,[5] but I tell you, you will never enter Rome!" San Martino was so mortified that he left the next day.[6] 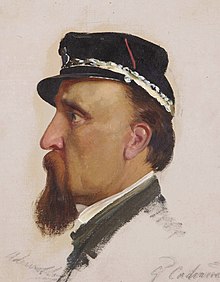 In 1870, the Italian Army, commanded by General Raffaele Cadorna, crossed the papal frontier on 11 September, and advanced toward Rome, moving slowly in the hope that a peaceful entry could be negotiated. The Papal garrisons had retreated from Orvieto, Viterbo, Alatri, Frosinone and other strongholds in Lazio, Pius IX himself being convinced of the inevitability of a surrender.[7] When the Italian Army approached the Aurelian Walls that defended the city, the papal force was commanded by General Hermann Kanzler, and was composed of the Swiss Guards and a few "zouaves"—volunteers from France, Austria, the Netherlands, Spain, and other countries—for a total of 13,157 defenders against some 50,000 Italians.[8]

The Italian army reached the Aurelian Walls on September 19 and placed Rome under siege. Pius IX decided that the surrender of the city would be granted only after his troops had put up enough resistance to make it plain that the take-over was not freely accepted. On September 20, after a cannonade of three hours had breached the Aurelian Walls at Porta Pia (Breccia di Porta Pia), the crack Piedmontese infantry corps of Bersaglieri entered Rome. In the event 49 Italian soldiers and 19 Papal Zouaves died. Rome and the region of Lazio were annexed to the Kingdom of Italy after a plebiscite on October 2.

The Leonine City, excluding the Vatican, seat of the Pope, was occupied by Italian soldiers on September 21. The Italian government had intended to let the Pope keep the Leonine City, but the Pope would not agree to give up his claims to a broader territory and claimed that since his army had been disbanded, apart from a few guards, he was unable to ensure public order even in such a small territory.[9]

The Via Pia, the road departing from Porta Pia, was rechristened Via XX Settembre (September 20). Subsequently, in numerous Italian cities the name Venti Settembre was given to the main road leading to the local cathedral.

Writer Edmondo De Amicis took part in the capture of Rome as an officer in the Italian army. 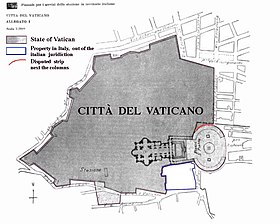 Territory of Vatican City State, established during 1929 by the Lateran Accords

The capture of Rome completed the unification of Italy. The Papal States had stridently resisted incorporation into the new nation, even as all the other Italian countries (except San Marino) joined it; Camillo Cavour's dream of proclaiming the Kingdom of Italy from the steps of St. Peter's Basilica did not come to pass. The occupation of Romagna (the eastern portion of the Papal States) in 1860 had left only Latium in the Pope's domains, and Latium, including Rome itself, was annexed in 1870.

For nearly sixty years thereafter, relations between the Papacy and the Italian government were hostile, and the status of the Pope became known as the "Roman Question".

Negotiations for the settlement of the Roman Question began in 1926 between the government of Italy and the Holy See, and culminated in the Lateran Pacts, signed—the Treaty says—for King Victor Emmanuel III of Italy by Benito Mussolini, Prime Minister and Head of Government, and for Pope Pius XI by Pietro Gasparri, Cardinal Secretary of State, on February 11, 1929. The agreements were signed in the Lateran Palace, from which they take their name. In the subsequent Lateran Treaty of 1929, the Holy See renounced its claims over most of the city of Rome in return for Italy's recognition of the Vatican State.

On 20 September 2000, an item in the Catholic publication Avvenire stated:

transl.: that in 1970, precisely on 20 September 1970, Pope Paul VI sent Cardinal Angelo Dell'Acqua, his vicar for Rome, to Porta Pia to celebrate the "providential" significance of the loss of the temporal power. Since then, at least since then, Porta Pia has also been a Catholic celebration!