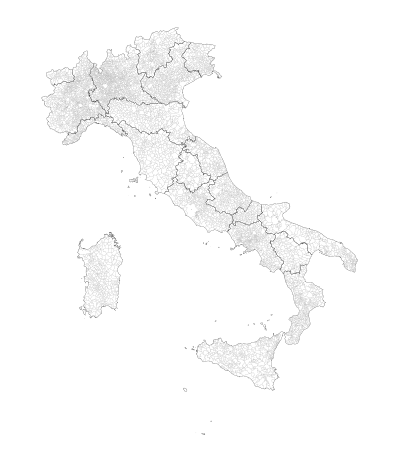 The comune (Italian pronunciation: [koˈmuːne]; plural: comuni [koˈmuːni]) is a basic constituent entity of Italy, roughly equivalent to a township or municipality.

The comune provides many of the basic civil functions: registry of births and deaths, registry of deeds, and contracting for local roads and public works.

It is headed by a mayor (sindaco or sindaca) assisted by a legislative body, the consiglio comunale (communal council), and an executive body, the giunta comunale (communal committee). The mayor and members of the consiglio comunale are elected together by resident citizens: the coalition of the elected mayor (who needs an absolute majority in the first or second round of voting) gains three fifths of the consiglio's seats. The giunta comunale is chaired by the mayor, who appoints others members, called assessori, one of whom serves as deputy mayor (vicesindaco). The offices of the comune are housed in a building usually called the municipio, or palazzo comunale.

As of February 2019 there were 7,918 comuni in Italy; they vary considerably in area and population. For example, the comune of Rome, in Lazio, has an area of 1,307.71 km² and a population of 2,761,477 inhabitants, and is both the largest and the most populated; Atrani in the province of Salerno (Campania) was the smallest comune by area, with only 0.12 km², and Morterone (Lombardy) is the smallest by population.

While provinces and regions are sanctioned by the constitution of the Republic of Italy, and subject to fairly frequent border changes, the natural cultural unit is indeed the comune, for many Italians, their hometown.

Many comuni also have a municipal police (polizia municipale), which is responsible for public order duties. Traffic control is their main function in addition to controlling commercial establishments to ensure they open and close according to their license.

Administrative areas inside comuni varies according to their population.

Comuni with at least 250,000 residents are divided into circoscrizioni (circonscriptions, roughly equivalent to French arrondissements or London boroughs) to which the comune delegates administrative functions like schools, social services and waste collection; such functions varies from comune to comune. These bodies are headed by an elected president and a local council.

Sometimes a frazione might be more populated than the capoluogo; and rarely, owing to unusual circumstances (like depopulation), the town hall and its administrative functions can be moved to one of the frazioni: but the comune still retains the name of the capoluogo.

In some cases, a comune might not have a capoluogo but only some frazioni. In these cases, it is a comune sparso ("sparse comune") and the frazione which houses the town hall (municipio) is a sede municipale (compare county seat).

There are not many perfect homonymous Italian municipalities. There are only six cases in 12 comuni:[2]

This is mostly due to the fact the name of the province or region was appended to the name of the municipality in order to avoid the confusion. Remarkably two provincial capitals share the name Reggio: Reggio nell'Emilia, the capital of the province of Reggio Emilia, in the Emilia-Romagna, and Reggio di Calabria, the capital of the homonymous metropolitan city. Many other towns or villages are likewise partial homonyms (e.g. Anzola dell'Emilia and Anzola d'Ossola, or Bagnara Calabra and Bagnara di Romagna).