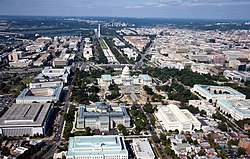 Washington, D.C., the capital of the United States 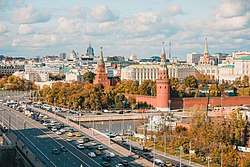 Moscow, the capital of Russia 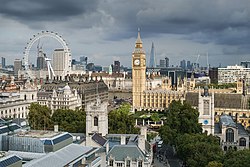 London, the capital of England and the United Kingdom

Paris, the capital of France 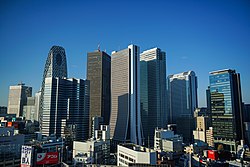 Tokyo, the capital of Japan 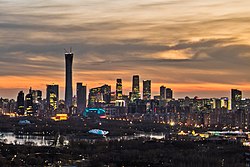 Beijing, the capital of China

A capital or capital city is the municipality exercising primary status in a country, state, province, or other administrative region, usually as its seat of government. A capital is typically a city that physically encompasses the government's offices and meeting places; the status as capital is often designated by its law or constitution. In some jurisdictions, including several countries, the different branches of government are located in different settlements. In some cases, a distinction is made between the official (constitutional) capital and the seat of government, which is in another place.

News media often use the name of a capital city as an alternative name for the country of which it is the capital or of the government that is seated there, as a form of metonymy. For example, "relations between Washington, D.C. and London" refer to "relations between the United States and the United Kingdom".[1]

In several English-speaking states, the terms county town and county seat are also used in lower subdivisions. In some unitary states, subnational capitals may be known as 'administrative centres'. The capital is often the largest city of its constituent, though not always. 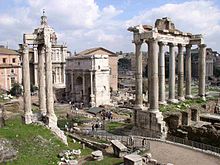 Historically, the major economic centre of a state or region has often become the focal point of political power, and became a capital through conquest or federation.[2] (The modern capital city has, however, not always existed: in medieval Western Europe, an itinerant (wandering) government was common.)[3] Examples are ancient Babylon, Abbasid Baghdad, ancient Athens, Rome, Constantinople, Chang'an, ancient Cusco, Madrid, Paris, London, Moscow, Beijing, Tokyo, Vienna, Lisbon, and Berlin. The capital city naturally attracts politically motivated people and those whose skills are needed for efficient administration of national or imperial governments, such as lawyers, political scientists, bankers, journalists, and public policy makers. Some of these cities are or were also religious centres,[4] e.g. Constantinople (more than one religion), Rome (the Roman Catholic Church), Jerusalem (more than one religion), Babylon, Moscow (the Russian Orthodox Church), Belgrade (the Serbian Orthodox Church), Paris, and Beijing.

The convergence of political and economic or cultural power is by no means universal. Traditional capitals may be economically eclipsed by provincial rivals, e.g. Nanking by Shanghai, Quebec City by Montreal, and numerous US state capitals. The decline of a dynasty or culture could also mean the extinction of its capital city, as occurred at Babylon[5] and Cahokia.

Although many capitals are defined by constitution or legislation, many long-time capitals have no legal designation as such, including Bern, Edinburgh, Lisbon, London, Paris, and Wellington. They are recognised as capitals as a matter of convention, and because all or almost all the country's central political institutions, such as government departments, supreme court, legislature, embassies, etc., are located in or near them. 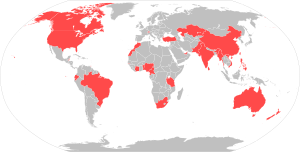 Countries whose capital is not their largest city 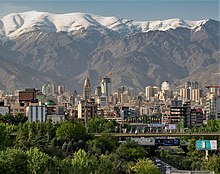 Tehran, capital and largest city of Iran, and the capital of the Persian empires in the last two centuries 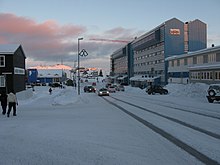 Nuuk, the capital of Greenland

Counties in the United Kingdom have historic county towns, which are often not the largest settlement within the county and often are no longer administrative centres, as many historical counties are now only ceremonial, and administrative boundaries are different.

In Canada, there is a federal capital, while the ten provinces and three territories each have capital cities. The states of such countries as Mexico, Brazil (including the famous cities of Rio de Janeiro and São Paulo, capitals of their respective states), and Australia also each have capital cities. For example, the six state capitals of Australia are Adelaide, Brisbane, Hobart, Melbourne, Perth, and Sydney. In Australia, the term "capital cities" is regularly used to refer to those six state capitals plus the federal capital Canberra, and Darwin, the capital of the Northern Territory. Abu Dhabi is the capital city of the Emirate of Abu Dhabi and also of the United Arab Emirates overall.

In the Federal Republic of Germany, each of its constituent states (or Länder, plural of Land) has its own capital city, such as Dresden, Wiesbaden, Mainz, Düsseldorf, Stuttgart, and Munich, as do all of the republics of the Russian Federation. The national capitals of Germany and Russia (the Stadtstaat of Berlin and the federal city of Moscow) are also constituent states of both countries in their own right. Each of the states of Austria and cantons of Switzerland also have their own capital cities. Vienna, the national capital of Austria, is also one of the states, while Bern is the (de facto) capital of both Switzerland and of the Canton of Bern.

Many national capitals are also the largest city in their respective countries, but in many countries this is not the case. 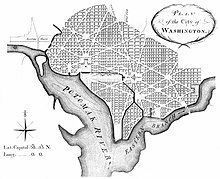 The L'Enfant Plan for Washington, D.C., the capital of the United States

Governing entities sometimes plan, design and build new capital cities to house the seat of government of a polity or of a subdivision. Deliberately planned and designed capitals include:

These cities satisfy one or both of the following criteria:

The Australian Parliament opened in the small town of Canberra in 1927 as a compromise between the largest cities, Sydney and Melbourne.

Some examples of the second situation (compromise locations) are:

Changes in a nation's political regime sometimes result in the designation of a new capital. Akmola (from 1998 Astana and from March 2019 Nur-Sultan) became the capital of Kazakhstan in 1997, following the collapse of the Soviet Union in 1991. Naypyidaw was founded in Burma's interior as the former capital, Rangoon, was claimed to be overcrowded.[9] 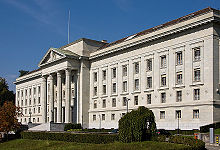 The Supreme Court, the seat of Switzerland's judiciary, is in Lausanne, although the executive and legislature are located in Bern. 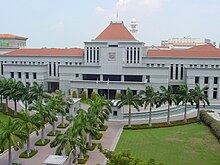 The Blue Palace, the official residence of Montenegro's president, is in Cetinje, although the executive and legislature are located in Podgorica.

A few nation states have multiple capitals, and there are also several states that have no capital. Some have a city as the capital but with most government agencies elsewhere.

There is also a ghost town which is currently the de jure capital of a territory: Plymouth in Montserrat.

Capitals that are not the seat of government

There are several countries where, for various reasons, the official capital and de facto seat of government are separated:

Some historical examples of similar arrangements, where the recognized capital was not the official seat of government:

With the rise of modern empires and the nation-state, the capital city has become a symbol for the state and its government, and imbued with political meaning. Unlike medieval capitals, which were declared wherever a monarch held his or her court, the selection, relocation, founding, or capture of a modern capital city is an emotional event. For example:

As the last of the Four Great Ancient Capitals of China, Beijing has served as the political center of China for most of the past eight centuries. 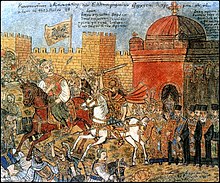 Constantinople, the capital of the Byzantine Empire, was the final part of the empire to fall to the Ottoman Turks due to its strong defences.

The capital city is usually but not always a primary target in a war, as capturing it usually guarantees capture of much of the enemy government, victory for the attacking forces, or at the very least demoralization for the defeated forces.

In ancient China, where governments were massive centralized bureaucracies with little flexibility on the provincial level, a dynasty could easily be toppled with the fall of its capital. In the Three Kingdoms period, both Shu and Wu fell when their respective capitals of Chengdu and Jianye fell. The Ming dynasty relocated its capital from Nanjing to Beijing, where they could more effectively control the generals and troops guarding the borders from Mongols and Manchus. The Ming was destroyed when Li Zicheng took their seat of power, and this pattern repeats itself in Chinese history, until the fall of the traditional Confucian monarchy in the 20th century. After the Qing dynasty's collapse, decentralization of authority and improved transportation and communication technologies allowed both the Chinese Nationalists and Chinese Communists to rapidly relocate capitals and keep their leadership structures intact during the great crisis of Japanese invasion.

National capitals were arguably less important as military objectives in other parts of the world, including the West, because of socioeconomic trends toward localized authority, a strategic modus operandi especially popular after the development of feudalism and reaffirmed by the development of democratic and capitalistic philosophies. In 1204, after the Latin Crusaders captured the Byzantine capital, Constantinople, Byzantine forces were able to regroup in several provinces; provincial noblemen managed to reconquer the capital after 60 years and preserve the empire for another 200 years after that. The British forces sacked various American capitals repeatedly during the Revolutionary War and War of 1812, but American forces could still carry on fighting from the countryside, where they enjoyed support from local governments and the traditionally independent civilian frontiersmen. Exceptions to these generalizations include highly centralized states such as France, whose centralized bureaucracies could effectively coordinate far-flung resources, giving the state a powerful advantage over less coherent rivals, but risking utter ruin if the capital were taken.