The canton of Zürich (German: Kanton

Zürich (help·info)) is a Swiss canton in the northeastern part of the country. With a population of 1,520,968 (as of 31 December 2018), it is the most populous canton in the country.[2] Its capital is the city of Zürich. The official language is German. The local Swiss German dialect, called Züritüütsch, is commonly spoken. In English the name of the canton and its capital is often written without an umlaut.

The prehistoric pile dwellings around Zürichsee comprise 11 of total 56 prehistoric pile dwellings around the Alps in Switzerland, that are located around Lake Zürich in the cantons of Schwyz, St. Gallen and Zürich.[3][4] Located on the shore of Lake Zürich, there are Freienbach–Hurden Rosshorn, Freienbach–Hurden Seefeld, Rapperswil-Jona/Hombrechtikon–Feldbach, Rapperswil-Jona–Technikum, Erlenbach–Winkel, Meilen–Rorenhaab, Wädenswil–Vorder Au, Zürich–Enge Alpenquai, Grosser Hafner and Kleiner Hafner. Because the lake has grown in size over time, the original piles are now around 4 metres (13 ft) to 7 metres (23 ft) under the water level of 406 metres (1,332 ft). Also on the small area of about 40 square kilometres (15 sq mi) around Zürichsee, there also the settlements Greifensee–Storen/Wildsberg on Greifensee and Wetzikon–Robenhausen on Pfäffikersee lakeshore. As well as being part of the 56 Swiss sites of the UNESCO World Heritage Site, each of these 11 prehistoric pile dwellings is also listed as a Class object in the Swiss inventory of cultural property of national and regional significance.[5]

Zurihgauuia (Zürichgau) was a subdivision of Turgowe (Thurgau) in the Duchy of Alamannia, consisting roughly of the territory between Reuss and Töss. From the 740s, substantial portions of Zürichgau were owned by the Abbey of St. Gall. In c. 760, an administrative re-organisation under counts Ruthard and Warin exempted the castle town of Zürich from comital rule. A county of Zürichgau was established under Louis the Pious, for a count Ruadker, in 820. Zürichgau (Zurichgeuue) remained a nominally separate territory in the later 9th century but was often ruled by the same count as Thurgau. In 915, Zürichgau together with Thurgau fell to the Bucharding dukes of Swabia. In the late 10th century, the county of Zürich was ruled by the Nellenburger, and during 1077–1172 by the Lenzburger. By the 13th century, Zürichgau was divided between the Habsburgs and the Kyburger, who held the territory west and east of Lake Zürich, respectively.[6] 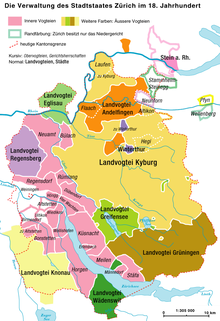 Administrative division of the Zürichgau in the 18th century.

The territory of the canton of Zürich corresponds to the lands acquired by the city of Zürich after it became reichsfrei in 1218. Zürich pursued a policy of aggressive territorial expansion especially during the century following the revolution of the guilds in 1336. Zürich joined the Swiss Confederacy in 1351.

Zürich claimed and lost the Toggenburg in the Old Zürich War of the 1440s. The northern parts up to the river Rhine came to the canton after the city of Zürich purchased Winterthur from the Habsburgs in 1468. In 1651, Zürich purchased Rafzerfeld from the counts of Sulz. At this point, almost all of the territory of the modern canton (as well as some territories beyond its modern borders) was owned by Zürich; exceptions include Wülflingen (acquired 1760), Buch (acquired 1761), Dietikon, which was a condominium, and Rheinau (owned by Rheinau Abbey).

In the 18th century, the "inner bailiwicks" (Innere Vogteien) were under direct administration of city officials, while the "outer bailiwicks" (Äussere Vogteien) were ruled by the reeves of Kyburg, Grüningen, Greifensee, Eglisau, Regensberg, Andelfingen, Wädenswil, and Knonau. The city of Winterthur was nominally subject to Zürich but retained far-reaching autonomy.

Zürichgau, the name of the medieval pagus, was in use for the territories of the city of Zürich during the 15th and 16th century; the term canton (Kanton) gradually entered use in the 16th century, but Zürichgau remained widely used well into the 19th century (becoming obsolescent after the formation of the modern canton in 1831).

Under the short-lived Helvetic Republic (1798–1803), the canton of Zürich became a purely administrative division. In 1803, some former possessions of Zürich to the west gained independence as part of the Canton of Aargau. In 1804 the Kantonspolizei Zürich was established as Landjäger-Corps des Kantons Zürich.[7]

Alfred Escher was a member of the new cantonal parliament of 1844; he was elected to the cantonal government in 1848 and later in the same year into the first National Council under the new federal constitution. The radical-liberal era of 1844–1868 was dominated by the so-called System Escher, a network of liberal politicians and industrialists built by Alfred Escher. Escher governed the canton almost in monarchical fashion, and was popularly dubbed Alfred I. or Tsar of All Zürich. Escher controlled all cantonal institutions, at first with very little political opposition, expunging all trace of the conservative takeover of 1839. Under Escher, the city of Zürich rose to the status of economic and financial center it still retains. Opposition against the dominance of Sytstem Escher increased after 1863. The cantonal government was accused to continue the system of aristocratic rule liberalism had claimed to abolish. The oppositional Democratic Movement was centered in Winterthur, led by mayor Johann Jakob Sulzer and publicist Salomon Bleuler. They succeeded in imposing the introduction of the direct democratic instrument of the popular initiative in 1865, which precipitated a revision of the cantonal constitution. In April 1869, a new cantonal constitution was adopted by popular vote, introducing additional direct democratic elements and the popular election of both the cantonal government and the cantonal representatives in the federal Council of States. The new constitution also abolished the death penalty (the last execution by hanging in Zürich took place in 1810, the last public execution by guillotine in 1865), guaranteed freedom of religion and freedom of association and introduced progressive taxes.

The Cantonal Bank was established in 1870 to regulate cantonal loans at fixed interest rates to farms and businesses.

Economic growth continued in the 20th century. A first airport was built at Dübendorf in 1910, replaced by the international airport at Kloten in 1948. Rapid urbanisation expanded throughout the canton and beyond in the final decades of the 20th century, further accelerated by the S-Bahn from 1990, with only a few municipalities in Weinland, Knonaueramt and Oberland remaining out of easy commuting distance to the city.

The current constitution replaced the one of 1869 in January 2006.

The Antiquarische Gesellschaft in Zürich is an organization devoted to preserving the canton's history, the Staatsarchiv Zürich houses the state archives.

Lake Zürich and the island of Ufenau, the largest in Switzerland

The canton of Zürich is situated in the eastern part of the Swiss plateau. It is entirely within the drainage basin of the High Rhine. It is characterized by Glacial landform and traversed by a series of rivers generally flowing south-east to north-west, listed west to east: Reuss, Reppisch, Sihl, Linth-Limmat (forming Lake Zürich), Glatt, Töss and Thur. The main lakes are the Lake Zürich (Linth-Limmat, 88 km2), Greifensee (Glatt, 8.4 km2) and Pfäffikersee (Glatt, 3.3 km2). Minor lakes include Türlersee (Limmat), Katzensee (Glatt), Hüttnersee (Sihl), Lützelsee (Limmat).

Its neighbouring cantons are Schaffhausen to the north, Aargau to the west, the cantons of Zug and Schwyz to the south and the cantons of Thurgau and St. Gallen to the east.

It also has an international border with the German district of Waldshut and though only for 460 m (1,510 ft)) the district of Konstanz in Baden-Württemberg owing to its short border with Stemmer, an outlying hamlet belonging to the municipality which forms the small German enclave of Büsingen am Hochrhein.

The canton can be roughly divided into the city and lake, the Unterland in the northwest, the Oberland in the southeast, the Weinland and Winterthur in the northeast, and the Knonaueramt southwest of the Albis. The Greater Zürich Area extends beyond the cantonal borders.

The Hörnli (1133 m) is the highest elevation of this mountain ridge. The valley of the river Sihl is located in the west of the canton. In confluences with the Limmat in the city of Zürich. The Sihl is separated from the lake of Zürich by the Albis Range. The Albishorn (915 m (3,002 ft)) is the highest elevation of this range. The Schnebelhorn is a mountain located near Fischenthal in the Töss Valley, between the cantons of Zürich (west) and St. Gallen (east). It is the highest summit (1,292 m (4,239 ft)) of the canton of Zürich. The Uetliberg is part of the Albis Range. This mountain is popular with the population of the city of Zürich for recreation.

The vast majority of the canton lies to the south of the Rhine, the exceptions being Rafzerfeld as mentioned and a tiny portion of the village of Laufen-Uhwiesen called Nohl.

The blazon of the coat of arms is Per bend azure and argent.[9]

The Cantonal Council (Kantonsrat) has 180 members elected every four years.

The canton is governed by a seven-member council (Regierungsrat). On 24 March 2019, the following were elected for four years: 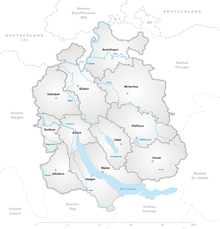 Districts in the canton of Zürich

The canton is divided into 12 districts (German: Bezirke):

There are, as of December 2015[update], 169 municipalities in the canton (Politische Gemeinden).[10]

The historical population is given in the following chart:[21]

In 1519, Huldrych Zwingli became the pastor of the Grossmünster in Zürich, and soon thereafter Zürich became a reformed or Protestant canton. Even though Zwingli died in battle in 1531, the canton remained a stronghold of the Swiss Reformed Church over the following centuries. While a plurality of the population is Protestant (43%), 31% of the population was Roman Catholic in 2004,[22] a legacy of considerable immigration from Southern Europe.

The cantonal, local and church tax rates in the canton is generally slightly lower than the average rate for the entire country.[27] 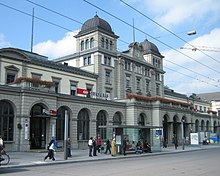 Railways in standard gauge run through all major valleys in the canton. The centre for transport is Zürich, where a great number of local railways connect to national and international rail links. The railway station of the city of Zürich, Zürich Hauptbahnhof, is one of the busiest in Europe, counting the number of arriving and departing trains. Zürich is well connected to other European cities using rail links. The major trains ICE, TGV and Cisalpino connect to Zürich.

The first Swiss railway ran in the Limmat valley in 1847, connecting Zürich to Baden.

The major airport of Switzerland Zurich Airport is located in Kloten, a mere 12 kilometres (7.5 miles) from the city centre of Zürich. It is home to Swiss International Air Lines.