Schaffhausen Rhine Stein am Rhein
This article is about the canton. For the town and capital, see Schaffhausen.
Canton of Switzerland
Canton

Schaffhausen (help·info)) is the northernmost canton of Switzerland. The principal city and capital of the canton is Schaffhausen. The canton's territory is divided into three non-contiguous segments, where German territory reaches the Rhine. The large central part, which includes the capital, in turn separates the German exclave of Büsingen am Hochrhein from the rest of Germany.

Schaffhausen was a city-state in the Middle Ages; it is documented that it struck its own coins starting in 1045. It was then documented as Villa Scafhusun.[4] Around 1049 Count Eberhard von Nellenburg founded a Benedictine monastery which led to the development of a community. This community achieved independence in 1190. In 1330 the town lost not only all its lands but also its independence to the Habsburgs. In 1415 the Habsburg Duke Frederick IV of Austria sided with the Antipope John XXIII at the Council of Constance, and was banned by the Emperor Sigismund. As a result of the ban and Frederick's need of money, Schaffhausen was able to buy its independence from the Habsburgs in 1418. The city allied with six of the Swiss confederates in 1454 and allied with a further two (Uri and Unterwalden) in 1479. Schaffhausen became a full member of the Old Swiss Confederation in 1501.[4] The first railroad came to Schaffhausen in 1857. In 1944 Schaffhausen suffered from a bombing raid by United States Army Air Forces planes that accidentally strayed from Germany into neutral Switzerland.

The cantonal constitution was written in 1876 and revised in 1895.

The distinctive coat of arms bears the Schaffhauser Bock (billy goat of Schaffhausen).

The canton's territory is divided into three non-contiguous segments where German territory reaches the Rhine. The large central part, which includes the capital Schaffhausen, in turn separates the German exclave of Büsingen am Hochrhein from the rest of Germany. The small exclave of Rüdlingen-Buchberg lies to the southwest, and the third part contains Ramsen and Stein am Rhein to the east. With the exception of Vor der Brugg, part of Stein am Rhein, all three segments are separated from the rest of Switzerland by the Rhine.

The canton of Schaffhausen is bordered by the Swiss cantons of Zurich and Thurgau, as well as the German districts of Waldshut, Schwarzwald-Baar-Kreis and Konstanz, Baden-Württemberg.

Most of the canton lies on a plateau dominated by the Hoher Randen. The summit of this mountain is at 912 m (2,992 ft). The slopes of the mountain are gentle towards the south where it reaches the Rhine valley. Short and narrow valleys intersect these gentle slopes. The Klettgau is one such valley.

The Rhine Falls are the largest waterfalls in Europe and lie on the border of the cantons of Schaffhausen and Zürich. 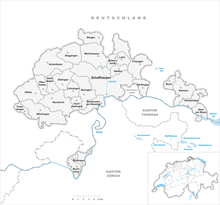 Municipalities in the Canton

The legislature is the Cantonal Council (Kantonsrat) of Schaffhausen, which consists of 60 members elected proportionally every four years. Until 2008, it consisted of 80 members.

The executive branch is the Government Council (Regierungsrat), which consists of 5 members elected every four years.

Swiss citizens who live in Canton Schaffhausen are required to vote in elections. Compulsory voting has never existed at the national level in Switzerland. It was introduced in several cantons starting in the late 19th century but by 1974, it has been abolished everywhere except in Schaffhausen. Citizens who do not vote are invoiced with a fine. 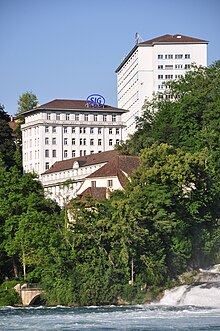 SIG building in Neuhausen am Rheinfall

Schaffhausen is a part of the Zürcher Wirtschaftsraum (Zurich economic region) and the canton's economy is well integrated with that of the wider region.

Well-regarded white Riesling wine is grown here as well as several other varieties.[13] The main industries, however, are the production of machinery and metal goods. There is also watch making and jewellery. Minor industrial branches are textiles, leather goods, glass, cement, paper and chemicals.[14] There is a brewery in the canton.

At Rheinau there is a hydro electrical power plant generating electricity for the canton and for export. Major electricity customers are the chemical industry in Rheinfelden and the aluminium plant at Neuhausen am Rheinfall. The city of Schaffhausen also uses much of the electricity produced at Rheinau.

Schaffhausen lies on the busy Milan-Zurich-Stuttgart rail line which is serviced by trains from both the Swiss Federal Railways and German Railways.[15]