listen)),[needs Arpitan IPA] is the newest (founded in 1979) of the 26 Swiss cantons, located in the northwestern part of Switzerland. The capital is Delémont. It shares borders with the canton of Basel-Landschaft, the canton of Bern, the canton of Neuchatel, the canton of Solothurn, and the French régions of Bourgogne-Franche-Comté and Grand Est.

The king of Burgundy donated much of the land that today makes up canton Jura to the bishop of Basel in 999. The area was a sovereign state within the Holy Roman Empire for more than 800 years. After the Treaty of Westphalia in 1648 the Jura had close ties with the Swiss Confederation. At the Congress of Vienna (1815), the Jura region became part of the canton of Bern. This act caused dissension. The Jura was French-speaking and Roman Catholic, whereas the canton of Bern was mostly German-speaking and Protestant.

After World War II, a separatist movement campaigned for a secession of Jura from the canton of Bern. After a long and partly militant struggle, which included some arson attacks by a youth organisation Les Béliers, a constitution was accepted in 1977. In 1978, the split was made official when the Swiss people voted in favour, and in 1979, the Jura joined the Swiss Confederation as a full member. The canton celebrated its independence from the canton of Bern on 23 June. However, the southern part of the region, which is also predominantly French-speaking but has a Protestant majority, opted not to join the newly formed canton, instead remaining part of the canton of Bern. Although this decision may be considered strange linguistically, the choice may have been influenced by the fact that the canton of Bern is financially richer and is at the heart of federal power in Switzerland. The area is now known as Bernese Jura. The word Jura, therefore, may refer either to canton Jura, or to the combined territory of canton Jura and the Bernese Jura. Switzerland as a whole often presents the latter from a touristic standpoint with documentation easily available in French or German.

The coat of arms of the canton has been added to the side of the dome in the Federal Palace in Bern, which features the arms of the other cantons, after its foundation in 1978

Since 1994, the question of the Jura region has again been controversial. In 2004, a federal commission proposed that the French-speaking southern Jura be united with the canton of Jura, as the language question now seems to be more important than the denominational one. A possible solution would be to create two half-cantons, as reunification with the creation of only a single canton would mean a complete restructuring of the Jura's current political system, with the cantonal capital being transferred from Delémont to Moutier.

On 18 June 2017, the town of Moutier voted to quit Bern and join the canton of Jura. On 17 September 2017, the nearby municipalities of Belprahon and Sorvilier conversely voted to remain in the canton of Bern.[3] The vote in Moutier has since been declared invalid.[4]

Canton Jura lies in the northwest of Switzerland. It consists of parts of the Jura mountains in the south and the Jura plateau in the north. The Jura plateau is hilly and almost entirely limestone. The districts of Ajoie and Franches-Montagnes lie in this region. The term "Jurassic" is derived from the Jura Alps, strata of which give the era its name.

To the north and the west of the canton lies France. The canton of Solothurn and Basel-Landschaft are to east of the canton, while the canton of Bern bounds the Jura to the south. The rivers Doubs and the Birs drain the lands. The Doubs joins the Saône and then the Rhône, whereas the Birs is a tributary to the Rhine.

Districts in the canton of Jura

Jura is divided into 3 districts:

Main article: Municipalities of the canton of Jura

The historical population is given in the following chart:[9] 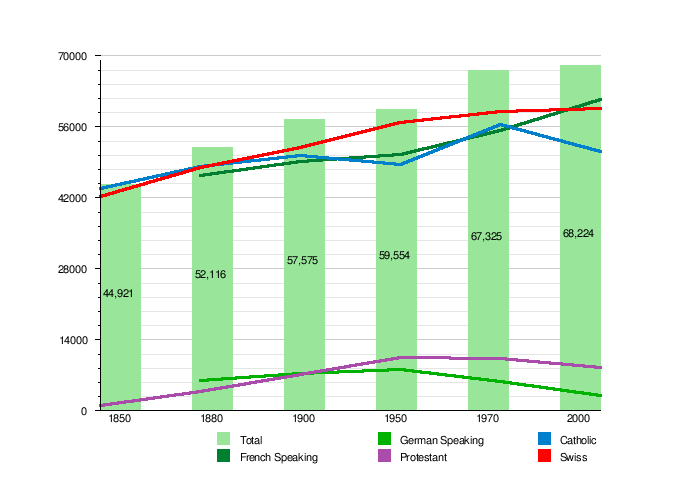 Agriculture is important in canton Jura. Cattle breeding is significant, but there is also horse breeding (the Franches-Montagnes is the last Swiss horse race). The main industries are watches, textiles and tobacco. There is a growing number of small and medium-sized businesses. In 2001, there were 3,578 people who worked in the primary economic sector. 14,109 people were employed in the secondary sector and 16,513 people were employed in the tertiary sector.[9]

The eau de vie Damassine is one typical produce of the Ajoie area. (see [1] Terroir Jura and [2] Jura Infos)