Cantons of Switzerland Right-wing populism Municipalities of the canton of Geneva
For other uses, see Geneva (disambiguation).
Canton of Switzerland
Canton

The Republic and canton of Geneva (French: République et canton de Genève; Francoprovençal: Rèpublica et canton de Geneva; German: Republik und Kanton Genf; Italian: Repubblica e Cantone di Ginevra; Romansh: Republica e chantun Genevra) is the French-speaking westernmost canton or state of Switzerland, surrounded on almost all sides by France (Auvergne-Rhône-Alpes). As is the case in several other Swiss cantons (canton of Ticino, canton of Neuchâtel, and canton of Jura), this canton is referred to as a republic within the Swiss Confederation.

The canton of Geneva is located in the southwestern corner of Switzerland and is considered one of the most cosmopolitan areas of the country. As a center of the Calvinist Reformation, the city of Geneva has had a great influence on the canton, which essentially consists of the city and its hinterlands.

Geneva was controlled by the Allobroges tribe until 121 BC.

It was annexed to the Roman Empire in 121 BC and remained part of it until 443.

In 443, Burgundians took over Geneva.

In 532, the land controlled by Burgundians became part of the Frankish Empire.

Geneva became a part of the Kingdom of Burgundy in 888.

Geneva became a part of the Holy Roman Empire in 1032 and officially remained in it until the Peace of Westphalia.

Prince-Bishopric of Geneva, political struggles and the Grand Council (1154–1541)

As from 1416, the Dukes of Savoy attempted to annex the city, both by claiming secular authority and by installing members of the Savoy dynasty as bishops, the city sought assistance in allying itself with the Old Swiss Confederacy.

The Republic of Geneva existed, depending on sources, either from 1534,[3] or from November 30, 1541,[4] when the General Council ratified the ecclesiastical ordinances of John Calvin, until April 26, 1798, when it was annexed by France, and then from December 31, 1813, until May 19, 1815, during the Restauration of the Republic. It was given a constitution (Édits civils) in 1543, and it effectively functioned as a Protestant theocracy. The Republic of Geneva reinforced its alliance to the Protestant cantons of the Swiss Confederacy, becoming an "everlasting ally" in 1584.

The French Revolution reached Geneva in 1792, and in February 1794, the Republic gave itself a new, revolutionary constitution which proclaimed the equality of all citizens. After the death of Robespierre in July of the same year, there was a counter-revolution, which gained the upper hand by 1796.

Robespierre's death prompted the French invasion of 1798, and the annexation of Geneva which became the capital of the French département du Léman.

The Napoleonic army left Geneva on December 30, 1813, and on the next day the return of the Republic (Restauration de la République) was proclaimed.

Republic and canton of Geneva (1815–present)

Geneva finally joined the Swiss Confederation in 1815 as the 22nd canton, having been enlarged by French and Savoyard territories at the Congress of Vienna (see Restoration and Regeneration). 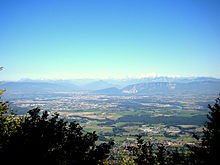 View from beneath Le Reculet towards the canton of Geneva, Annemasse, the Salève, and the Mont-Blanc

The area of the canton of Geneva is 282 square kilometers (108.9 sq mi). The canton is surrounded on almost all sides by France (Auvergne-Rhône-Alpes) and bordered by the Swiss canton of Vaud on the northeast. The adjoining French départements are Ain (to the west) and Haute-Savoie (to the south and east). The current boundaries of the canton were established in 1815.

Main article: Municipalities of the canton of Geneva 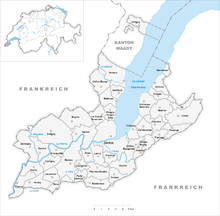 Municipalities of the canton of Geneva

The constitution of the canton was established in 1847 and has, since then, been amended several times. The cantonal executive government (Conseil d'État) has seven members, who are elected for five years.

Michèle Righetti is the chancellor of the canton (Chancilière d'Etat) since 2018.

The legislature, the Grand Council (Grand Conseil), has 100 seats, with deputies elected for four years at a time.[9]

In a similar way to what happens at the Federal level, any change to the Constitution is subject to compulsory referendum. In addition, any law can be subject to a referendum if it is demanded by 7,000 persons entitled to vote,[11] and 10,000 persons may also propose a new law.[12]

^a FDP before 2009, FDP.The Liberals after 2009
^b "*" indicates that the party was not on the ballot in this canton.
^c Part of the FDP for this election
^d Combined with the SD for this election 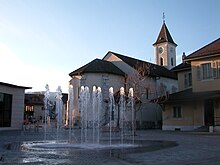 As home of Calvin's Reformation, the canton of Geneva has traditionally been a Protestant Christian stronghold. However, over the latter part of the 20th century, the proportion of Roman Catholics (220,139 people or 44.5% as of 2017[update]) in the total population rose, in large part due to immigration from Southern Europe, and now they outnumber members of the Swiss Reformed Church (65,629 people or 13.3% as of 2017[update]) in the canton by far; there has also been an increasing tendency in the Swiss population toward becoming religiously unaffiliated.[18] However, the canton is still officially considered Protestant. The surrounding regions of France are mostly Roman Catholic.

The city of Geneva dominates the economy of the canton. It is a center of commerce, trade and finance. Geneva is of international significance also as a financial center. A great number of Swiss banks are located in Geneva, particularly in the area of private banking. It is also a major global center for commodities trading, including oil, metals and foodstuff.

The service industry is most significant in Geneva where there are headquarters of a number of international corporations and organizations, such as the United Nations and the International Labour Organization. Agriculture is commonplace in the hinterlands of Geneva, particularly wheat and wine. Precision machinery and instruments are other branches where the economy of the canton of Geneva is strong. This is also reflected in the tradition of watchmaking in Geneva.

Most of the main roads in the canton of Geneva radiate from the capital city of Geneva. Of these main roads, a great number lead into France rather than other Swiss cantons. The canton is served by an international airport at Cointrin (Geneva International Airport), which only has one terminal. There are many railway services including commuter, intercity regional, and international mostly originating from Geneve Cornavin Station in Geneva. The services are operated by the Swiss Federal Railways, SNCF (France's national rail), and Trenitalia. Since 1984 the French high-speed trains (TGV) come to Geneva. In 1964, the canton of Geneva was connected to the Swiss highway system and in 1970 to that of France.

The main educational institution is the University of Geneva, founded in 1559 by John Calvin. It was originally called Schola Genevensis. The original buildings are no longer used by the University, and is now used by Collège Calvin.

The Jeûne genevois is a public holiday specific to Geneva, celebrated on the Thursday following the first Sunday of September.

L'Escalade, or Fête de l'Escalade (from escalade, the act of scaling defensive walls), is an annual festival held in December in Geneva, Switzerland, celebrating the defeat of the surprise attack by troops sent by Charles Emmanuel I, Duke of Savoy during the night of 11–12 December 1602 (Old style). The celebrations and other commemorative activities are usually held on 12 December or the closest weekend.