A cantilever bridge is a bridge built using cantilevers, structures that project horizontally into space, supported on only one end. For small footbridges, the cantilevers may be simple beams; however, large cantilever bridges designed to handle road or rail traffic use trusses built from structural steel, or box girders built from prestressed concrete. The steel truss cantilever bridge was a major engineering breakthrough when first put into practice, as it can span distances of over 1,500 feet (460 m), and can be more easily constructed at difficult crossings by virtue of using little or no falsework. 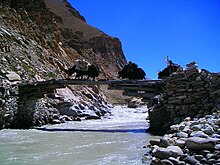 The original style of cantilever bridge

Engineers in the 19th century understood that a bridge that was continuous across multiple supports would distribute the loads among them. This would result in lower stresses in the girder or truss and meant that longer spans could be built.[1]:57, 190 Several 19th-century engineers patented continuous bridges with hinge points mid-span.[2]:75,79 The use of a hinge in the multi-span system presented the advantages of a statically determinate system[3] and of a bridge that could handle differential settlement of the foundations.[1]:190 Engineers could more easily calculate the forces and stresses with a hinge in the girder. 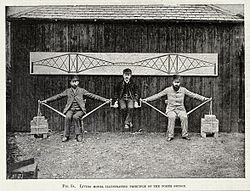 Human demonstration of the principle

The High Bridge of Kentucky by C. Shaler Smith (1877), the Niagara Cantilever Bridge by Charles Conrad Schneider (1883) and the Poughkeepsie Bridge by John Francis O'Rourke and Pomeroy P. Dickinson (1889) were all important early uses of the cantilever design.[3]:par. 3,5 The Kentucky River Bridge spanned a gorge that was 275 feet (84 metres) deep and took full advantage of the fact that falsework, or temporary support, is not needed for the main span of a cantilever bridge.[3]:par. 3

The most famous early cantilever bridge is the Forth Bridge. This bridge held the record for longest span in the world for twenty nine years, until it was surpassed by the Quebec Bridge. Benjamin Baker illustrated the structural principles of the suspended span cantilever in the photo on the right. The suspended span, where Kaichi Watanabe sits, is seen in the center. The need to resist compression of the lower chord is seen in the use of wooden poles while the tension of the upper chord is shown by the outstretched arms. The action of the outer foundations as anchors for the cantilever is visible in the placement of the counterweights.[3]:par. 6

Cantilever Bridge.—A structure at least one portion of which acts as an anchorage for sustaining another portion which extends beyond the supporting pier.

A diagram of the parts of the John P. Grace Memorial Bridge

A common way to construct steel truss and prestressed concrete cantilever spans is to counterbalance each cantilever arm with another cantilever arm projecting the opposite direction, forming a balanced cantilever; when they attach to a solid foundation, the counterbalancing arms are called anchor arms. Thus, in a bridge built on two foundation piers, there are four cantilever arms: two which span the obstacle, and two anchor arms which extend away from the obstacle. Because of the need for more strength at the balanced cantilever's supports, the bridge superstructure often takes the form of towers above the foundation piers. The Commodore Barry Bridge is an example of this type of cantilever bridge.

Steel truss cantilevers support loads by tension of the upper members and compression of the lower ones. Commonly, the structure distributes the tension via the anchor arms to the outermost supports, while the compression is carried to the foundations beneath the central towers. Many truss cantilever bridges use pinned joints and are therefore statically determinate with no members carrying mixed loads.

Some steel arch bridges (such as the Navajo Bridge) are built using pure cantilever spans from each side, with neither falsework below nor temporary supporting towers and cables above. These are then joined with a pin, usually after forcing the union point apart, and when jacks are removed and the bridge decking is added the bridge becomes a truss arch bridge. Such unsupported construction is only possible where appropriate rock is available to support the tension in the upper chord of the span during construction, usually limiting this method to the spanning of narrow canyons.

The old eastern span of the San Francisco–Oakland Bay Bridge, pictured in August 2014, is deconstructed in nearly the reverse order of its construction. Similar temporary supports were used under each anchor arm during the bridge's construction.