Provinces and territories of Canada

Advertisement - You can get this game from STEAM
Top-level subdivisions of Canada
"Canadian Province" redirects here. For the historic colony, see Province of Canada. For the biological term, see Circumboreal Region.

The provinces and territories of Canada are sub-national divisions within the geographical areas of Canada under the jurisdiction of the Canadian Constitution. In the 1867 Canadian Confederation, three provinces of British North America—New Brunswick, Nova Scotia, and the Province of Canada (which upon Confederation was divided into Ontario and Quebec)—were united to form a federated colony, becoming a sovereign nation in the next century. Over its history, Canada's international borders have changed several times, and the country has grown from the original four provinces to the current ten provinces and three territories. Together, the provinces and territories make up the world's second-largest country by total area.

The major difference between a Canadian province and a territory is that provinces receive their power and authority from the Constitution Act, 1867 (formerly[1] called The British North America Act, 1867), whereas territorial governments have powers delegated to them by the Parliament of Canada. The powers flowing from the Constitution Act are divided between the Government of Canada (the federal government) and the provincial governments to exercise exclusively. A change to the division of powers between the federal government and the provinces requires a constitutional amendment, whereas a similar change affecting the territories can be performed unilaterally by the Parliament of Canada or government.

In modern Canadian constitutional theory, the provinces are considered sovereign within certain areas based on the divisions of responsibility between the provincial and federal government within the Constitution Act 1867, and each province thus has its own representative of the Canadian "Crown", the lieutenant governor. The territories are not sovereign, but instead their authorities and responsibilities come directly from the federal level, and as a result, have a commissioner instead of a lieutenant governor.

There are three territories in Canada. Unlike the provinces, the territories of Canada have no inherent sovereignty and have only those powers delegated to them by the federal government.[9][10][11] They include all of mainland Canada north of latitude 60° north and west of Hudson Bay and all islands north of the Canadian mainland (from those in James Bay to the Queen Elizabeth Islands). The following table lists the territories in order of precedence (each province has precedence over all the territories, regardless of the date each territory was created).

Main article: Population of Canada by province and territory 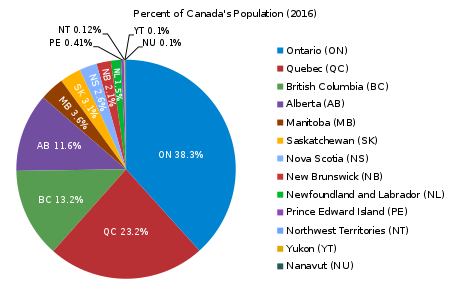 The majority of Canada's population is concentrated in the areas close to the Canada–US border. Its four largest provinces by area (Quebec, Ontario, British Columbia and Alberta) are also (with Quebec and Ontario, switched in order) its most populous; together they account for 86% of the country's population. The territories (the Northwest Territories, Nunavut and Yukon) account for over a third of Canada's area but are home to only 0.3% of its population, which skews the national population density value.[15]

Generally, Canadian Provinces steadily grew in population along with Canada. However, some provinces such as Saskatchewan, Prince Edward Island and Newfoundland and Labrador experienced long periods of stagnation or population decline. Ontario and Quebec were always the two biggest provinces in Canada, with over 60% of the population to themselves at any given time. The demographic importance of the West steadily grew over time, while the importance of Atlantic Canada steadily slipped.[15] 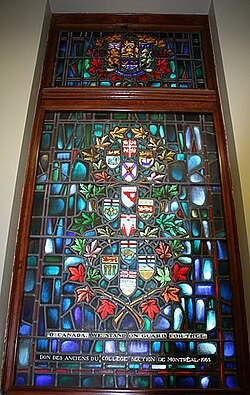 "O Canada we stand on guard for thee" Stained Glass, Yeo Hall, Royal Military College of Canada featuring arms of the Canadian provinces and territories as of 1965

Ontario, Quebec, New Brunswick, and Nova Scotia were the original provinces, formed when several British North American colonies federated on July 1, 1867, into the Dominion of Canada and by stages began accruing the indicia of sovereignty from the United Kingdom.[17] Prior to this, Ontario and Quebec were united as the Province of Canada. Over the following years, Manitoba (1870), British Columbia (1871), and Prince Edward Island (1873) were added as provinces.[17]

The British Crown had claimed two large areas north-west of the Canadian colony, known as Rupert's Land and the North-Western Territory, and assigned them to the Hudson's Bay Company. In 1870, the company relinquished its claims for £300,000 ($1.5 million), assigning the vast territory to the Government of Canada.[18] Subsequently, the area was re-organized into the province of Manitoba and the Northwest Territories.[18] The Northwest Territories were vast at first, encompassing all of current northern and western Canada, except for the British holdings in the Arctic islands and the Colony of British Columbia; the Territories also included the northern two-thirds of Ontario and Quebec, and almost all of present Manitoba, with the 1870 province of Manitoba originally being confined to a small area in the south of today's province.[19] The British claims to the Arctic islands were transferred to Canada in 1880, adding to the size of the Northwest Territories. The year of 1898 saw the Yukon Territory, later renamed simply as Yukon, carved from the parts of the Northwest Territories surrounding the Klondike gold fields. On September 1, 1905, a portion of the Northwest Territories south of the 60th parallel north became the provinces of Alberta and Saskatchewan.[19] In 1912, the boundaries of Quebec, Ontario, and Manitoba were expanded northward: Manitoba's to the 60° parallel, Ontario's to Hudson Bay and Quebec's to encompass the District of Ungava.[20]

In 1869, the people of Newfoundland voted to remain a British colony over fears that taxes would increase with Confederation, and that the economic policy of the Canadian government would favour mainland industries.[21] In 1907, Newfoundland acquired dominion status.[22] In the middle of the Great Depression in Canada with Newfoundland facing a prolonged period of economic crisis, the legislature turned over political control to the Newfoundland Commission of Government in 1933.[23] Following Canada's participation in World War II, in a 1948 referendum, a narrow majority of Newfoundland citizens voted to join the Confederation, and on March 31, 1949, Newfoundland became Canada's tenth province.[24] In 2001, it was officially renamed Newfoundland and Labrador.[25]

In 1903, the Alaska Panhandle Dispute fixed British Columbia's northwestern boundary.[26] This was one of only two provinces in Canadian history to have its size reduced. The second reduction, in 1927, occurred when a boundary dispute between Canada and the Dominion of Newfoundland saw Labrador increased at Quebec's expense – this land returned to Canada, as part of the province of Newfoundland, in 1949.[27] In 1999, Nunavut was created from the eastern portion of the Northwest Territories.[28] Yukon lies in the western portion of Northern Canada, while Nunavut is in the east.[29]

All three territories combined are the most sparsely populated region in Canada, covering 3,921,739 km2 (1,514,192 sq mi) in land area.[6] They are often referred to as a single region, The North, for organisational and economic purposes.[30] For much of the Northwest Territories' early history it was divided into several districts for ease of administration.[31] The District of Keewatin was created as a separate territory from 1876 to 1905, after which, as the Keewatin Region, it became an administrative district of the Northwest Territories.[32] In 1999, it was dissolved when it became part of Nunavut.

Provincial and territorial legislatures have no second chamber like the Canadian Senate. Originally, most provinces had such bodies, known as legislative councils, with members titled councillors. These upper houses were abolished one by one, Quebec's being the last in 1968.[35] In most provinces, the single house of the legislature is known as the Legislative Assembly; the exceptions are Nova Scotia and Newfoundland and Labrador, where the chamber is called the House of Assembly, and Quebec where it is called the National Assembly.[36] Ontario has a Legislative Assembly but its members are called Members of the Provincial Parliament or MPPs.[37] The legislative assemblies use a procedure similar to that of the House of Commons of Canada. The head of government of each province, called the premier, is generally the head of the party with the most seats.[38] This is also the case in Yukon, but the Northwest Territories and Nunavut have no political parties at the territorial level.[39] The Queen's representative in each province is the Lieutenant Governor.[40] In each of the territories there is an analogous Commissioner, but they represent the federal government rather than the monarch.[41]

* Members were previously titled "Member of the Legislative Assembly".

§ Prince Edward Island's lower house was previously called the "House of Assembly" and its members were titled "Assemblyman". After abolition of its upper house, assemblymen and councillors both sat in the renamed "Legislative Assembly". Later, this practice was abolished so that all members would be titled "Member of the Legislative Assembly".

‖ In Northwest Territories and Yukon the head of government was previously titled "Government Leader".

Some provinces have provincial political parties with no clear federal equivalent, such as the Alberta Party and Saskatchewan Party.

The provincial political climate of Quebec is different: the main split is between sovereignty, represented by the Parti Québécois and Québec solidaire, and federalism, represented primarily by the Quebec Liberal Party.[43] The Coalition Avenir Québec, meanwhile, takes an abstentionist position on the question and does not support or oppose sovereignty.

Currently, the three minority provincial/territorial governments are held by the NDP in British Columbia, the PCs in New Brunswick, and the PCs in Prince Edward Island

The Canadian National Vimy Memorial, dedicated to those killed, missing, and presumed dead in World War I

The Canadian National Vimy Memorial, near Vimy, Pas-de-Calais, and the Beaumont-Hamel Newfoundland Memorial, near Beaumont-Hamel, both in France, are ceremonially considered Canadian territory.[58] In 1922, the French government donated the land used for the Vimy Memorial "freely, and for all time, to the Government of Canada the free use of the land exempt from all taxes".[59] The site of the Somme battlefield near Beaumont-Hamel site was purchased in 1921 by the people of the Dominion of Newfoundland.[58] These sites do not, however, enjoy extraterritorial status and are thus subject to French law.

Main article: List of proposed provinces and territories of Canada

In late 2004, Prime Minister Paul Martin surprised some observers by expressing his personal support for all three territories gaining provincial status "eventually". He cited their importance to the country as a whole and the ongoing need to assert sovereignty in the Arctic, particularly as global warming could make that region more open to exploitation leading to more complex international waters disputes.[62]