In Reference re Secession of Quebec,[nb 1] the Supreme Court characterized four fundamental and organizing principles of the Constitution (though not exhaustive): federalism; democracy; constitutionalism and the rule of law; and protection of minorities.

Under the authority of section 52(1) of the Constitution Act, 1982, courts may review all matters of law. Accordingly, the courts have a broad scope of competence. Constitutional issues come before the court through disputes between parties as well as through reference questions. The court has the discretion to hear any Constitutional issues as long as there is a sufficient legal component.[nb 2] The U.S. constitutional political questions doctrine was rejected and so a political dimension to the issue does not bar it from court.[nb 3]

Courts must be careful when considering reference questions. They are required to be careful to only answer questions that are not speculative, of a purely political nature, or unripe.[nb 1] When answering the questions the court must retain its proper role within the constitutional framework.[nb 4]

A party must have standing (locus standi) to bring a constitutional challenge to the courts. Those who wish to challenge a law can do so in one of several ways. A party who is directly affected by the law that purports to be unconstitutional has standing as of right. Likewise, rights holder may challenge any law that will limit any of their rights. Those who are not protected by a right but are nonetheless prosecuted by that law may challenge it as well.[nb 5]

Public interest groups may also gain standing if they satisfy the requirements of the Borowski test.[nb 6] The group must demonstrate that the law raises a serious constitutional issue, the group has a genuine interest in the matter, and that there is no other reasonable and effective manner in which the issue may be brought before the Court.

See also: Preamble to the Constitution Act, 1867 and Implied Bill of Rights

In rare cases, the courts have developed substantive rules of constitutional law that are not expressly set out in constitutional texts but rather implied by a number of different principles.

In Hunt v T&N plc,[nb 7] the Supreme Court of Canada found that "the integrating character of our constitutional arrangements as they apply to interprovincial mobility" called for the courts of each province to give "full faith and credit" to the judgments of courts of other provinces – even though Canada's constitution does not have an express Full Faith and Credit Clause. This development was criticized by at least one academic.[1]

In the Provincial Judges Reference,[nb 8] the Supreme Court found that there was an unwritten constitutional principle that protected a right to judicial salary commissions for provincial court judges.

Since the 1929 ruling in Edwards v Canada (AG), the courts have interpreted the Constitution within the context of society to ensure that it adapts and reflects changes. As Viscount Sankey stated, "The British North America Act planted in Canada a living tree capable of growth and expansion within its natural limits."[nb 9]

The Canadian courts have adopted a liberal approach to the approach of statutory and constitutional interpretation, best expressed in the statement, "Today there is only one principle or approach, namely, the words of an Act are to be read in their entire context and in their grammatical and ordinary sense harmoniously with the scheme of the Act, the object of the Act, and the intention of Parliament."[2]

In Charter jurisprudence, the "dialogue principle" is where judicial review of legislation is said to be part of a "dialogue" between the legislatures and the courts. It specifically involves governments drafting legislation in response to court rulings and courts acknowledging the effort if the new legislation is challenged. 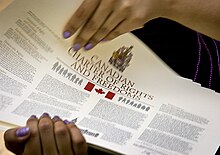 Canadian Charter of Rights and Freedoms

In 1982 the Canadian Charter of Rights and Freedoms was brought into effect. This was not meant to affect the workings of federalism, though some content was moved from section 91 to section 4 of the Charter. Mainly, the Charter is meant to decrease powers of both levels of government by ensuring both federal and provincial laws respect Charter rights, under section 32.

The relationship between federalism and the Charter is directly dealt with in section 31, which declares that neither the federal nor provincial governments gain powers under the Charter.

In R v Big M Drug Mart Ltd,[nb 5] it was found that legislation whose purpose is found to violate the Charter cannot be saved even if its effects were found to be inoffensive. If a provision of law cannot be seen to constitute a reasonable limit, demonstrably justifiable in a free and democratic society, it cannot be saved pursuant to section 1 of the Charter. The determination of s. 1 validity follows the Oakes test first expressed in R v Oakes, which follows four parts, of which the last three have been named as the "proportionality test":[nb 10]

Although modified in subsequent jurisprudence to relax its strictness,[nb 11][nb 12] Oakes continues to be of valid application.[3]

However, the provincial education power under Section 93 of the Constitution Act, 1867 is plenary, and is not subject to Charter attack, so long as it does not extend beyond the confines of Section 93's mandate to fund Roman Catholic separate schools and public schools.[nb 13]

In order to rationalize how far each jurisdiction may use its authority, certain doctrines have been devised by the courts:

There are also differences in legislative competence in each of the Provinces, as each had entered Confederation on somewhat different terms. As Viscount Simon of the Privy Council noted in 1953:

Every province created or to be created must, of course, be a province in the Dominion of Canada, but the Act of 1867 contained no such definition of province as would involve any conflict between that Act and the 1871 Act. There is no complete equality of powers between the four original provinces.[4]

The pith and substance doctrine is founded on the recognition that it is in practice impossible for a legislature to exercise its jurisdiction over a matter effectively without incidentally affecting matters within the jurisdiction of another level of government.[5]

Also, some matters are by their very nature impossible to categorize under a single head of power: they may have both provincial and federal aspects. The double aspect doctrine, which applies in the course of a pith and substance analysis, ensures that the policies of the elected legislators of both levels of government are respected, by recognizing that both Parliament and the provincial legislatures can adopt valid legislation on a single subject depending on the perspective from which the legislation is considered (i.e., depending on the various aspects of the matter in question).[6]

In certain circumstances, however, the powers of one level of government must be protected against intrusions, even incidental ones, by the other level. For this purpose, the courts have developed the doctrines of interjurisdictional immunity and federal paramountcy.[7]

The Parliament of Canada has power to bind Her Majesty both in right of Canada and of any province, but provincial statutes do not of their own force bind the federal Crown.[8][nb 14] There is considerable debate as to whether interprovincial sovereign immunity exists.[9]

In Re Upper Churchill Water Rights Reversion Act, an Act of the Newfoundland legislature was held to be unconstitutional because of colourability. While its stated purpose was to cancel a long-term lease and to expropriate power generation assets located in the province, its real purpose was to interfere with civil rights existing outside the province. As noted by Mr Justice McIntyre: 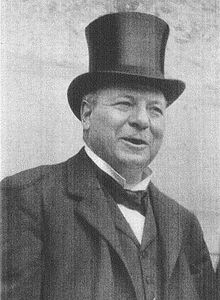 Within the spheres allotted to them by the (B.N.A.) Act the Dominion and the Provinces are rendered on general principle co-ordinate governments. As a consequence where one has legislative power the other has not, speaking broadly, the capacity to pass laws which will interfere with its exercise. What cannot be done directly cannot be done indirectly.[nb 16]

Multiple Access Ltd v McCutcheon[nb 19] held that, even when federal and provincial laws have been enacted on the same matter by virtue of the double aspect doctrine, the doctrine of paramountcy does not necessarily have to be invoked. In that regard, Mr Justice Dickson observed:

The conflict ... lies in large measures upon the opinion ... that the paramountcy doctrine became applicable because a plaintiff could resort to one set of provisions only and, having done so, there would be no scope for the other to have operational effect. That is unquestionably an important consideration but it is not, in my view, conclusive. The provincial legislation merely duplicates the federal; it does not contradict it. The fact that a plaintiff may have a choice of remedies does not mean that the provisions of both levels of government cannot "live together" and operate concurrently.[10]

Therefore, paramountcy should only be invoked where there is a conflict between the federal and provincial laws in question. There is no danger of double recovery being possible where the laws are not in conflict, as no court would permit it.[11]

The current approach to determining the constitutionality of legislation is founded in Canadian Western Bank v Alberta,[nb 20] where the Supreme Court of Canada summarized the following principles:

The burden of proof falls on the party that is alleging paramountcy. As Mr Justice Binnie and Mr Justice LeBel noted:

To sum up, the onus is on the party relying on the doctrine of federal paramountcy to demonstrate that the federal and provincial laws are in fact incompatible by establishing either

Where the constitutionality of legislation is being questioned in relation to the division of powers under the Constitution Act, 1867, an analysis of its pith and substance must be undertaken. This analysis consists of an inquiry into the true nature of the law in question for the purpose of identifying the matter to which it essentially relates.[13]

In Quebec (AG) v Lacombe, the nature of any ancillary powers arising from the pith and substance of a matter was considered. As noted by Chief Justice McLachlin, the Chief Justice:[nb 21]

In Quebec (AG) v Canadian Owners and Pilots Assn ("COPA"), Chief Justice McLachlin outlined a two-step test that must be undertaken to determine if interjurisdictional immunity comes into play:[nb 22]

Though there remains some debate, it has generally been accepted that interjurisdictional immunity applies equally to both the federal and provincial governments. Nevertheless, virtually all of the case law concerns situations where provincial laws encroach on federal matters.[15] In Canada (AG) v PHS Community Services Society, the Supreme Court expressed caution in employing the doctrine in future cases because:[nb 23]

As Chief Justice McLachlin explained in that decision:

[70] In summary, the doctrine of interjurisdictional immunity is narrow. Its premise of fixed watertight cores is in tension with the evolution of Canadian constitutional interpretation towards the more flexible concepts of double aspect and cooperative federalism. To apply it here would disturb settled competencies and introduce uncertainties for new ones. Quite simply, the doctrine is neither necessary nor helpful in the resolution of the contest here between the federal government and the provincial government.