The Canadian Bill of Rights[1] (French: Déclaration canadienne des droits) is a federal statute and bill of rights enacted by the Parliament of Canada on August 10, 1960.[2] It provides Canadians with certain rights at Canadian federal law in relation to other federal statutes. It was the earliest expression of human rights law at the federal level in Canada, though an implied Bill of Rights had already been recognized in the Canadian Common Law.[3]

The Canadian Bill of Rights remains in effect but is widely acknowledged to be limited in its effectiveness because it is a federal statute only, and so not directly applicable to provincial laws.[4][5] These legal and constitutional limitations were a significant reason that the Canadian Charter of Rights and Freedoms was established as an unambiguously-constitutional-level Bill of Rights for all Canadians, governing the application of both federal and provincial law in Canada, with the patriation of the Constitution of Canada in 1982. Since patriation, its usefulness at federal law in Canada is mostly limited to issues pertaining to the enjoyment of property, as set forth in its section 1(a)]—a slightly-broader "life, liberty, and security of the person" right than is recognized in section seven of the Canadian Charter of Rights and Freedoms.[6]

In 1947, Saskatchewan passed into law a bill of rights which covered both fundamental freedoms and equality rights. Saskatchewan's Bill of Rights is considered to have had a formative influence on John Diefenbaker, who was from Prince Albert, Saskatchewan. Thirteen years later, Diefenbaker successfully introduced the Canadian Bill of Rights, in 1960.[7]

In 1948, the General Assembly of the United Nations adopted a Universal Declaration of Human Rights.[8] Civil rights activists in Canada had for some time been advocating for the elimination from Canadian laws of discrimination based on sex, ethnicity, race and religion; the new declaration led to an increasing call for protection of human rights in Canada.[9][10]

John Diefenbaker and a National Bill of Rights 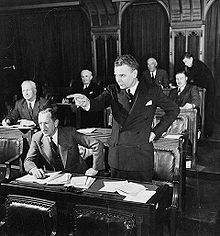 In 1936, four years before being elected to Parliament, John Diefenbaker began drafting his Bill of Rights. As a young boy, he saw injustice first-hand in the form of discrimination against French-Canadians, natives, Métis and European immigrants.[11]

On March 16, 1950, a decade before the Canadian Bill of Rights became law, Diefenbaker, then a Saskatchewan MP, told a public forum why such a law was needed. Individuals' freedoms of religion, press, speech and association are threatened by the state, he said. A Bill of Rights was needed to take a "forthright stand against discrimination based on colour, creed or racial origin".[12]

Diefenbaker advocated for the adoption of a bill of rights during the federal election campaign of 1957.[13] In 1960, as prime minister, Diefenbaker introduced the Canadian Bill of Rights, and it was enacted by Parliament.[8]

The Canadian Bill of Rights protects numerous rights, most of which were later included in the Charter. Examples include:

Section 2 of the Bill of Rights reads as follows:

2. Every law of Canada shall, unless it is expressly declared by an Act of the Parliament of Canada that it shall operate notwithstanding the Canadian Bill of Rights, be so construed and applied as not to abrogate, abridge or infringe or to authorize the abrogation, abridgement or infringement of any of the rights or freedoms herein recognized and declared, and in particular, no law of Canada shall be construed or applied so as to

(a) authorize or effect the arbitrary detention, imprisonment or exile of any person;
(b) impose or authorize the imposition of cruel and unusual treatment or punishment;
(c) deprive a person who has been arrested or detained

(d) authorize a court, tribunal, commission, board or other authority to compel a person to give evidence if he is denied counsel, protection against self-crimination or other constitutional safeguards;
(e) deprive a person of the right to a fair hearing in accordance with the principles of fundamental justice for the determination of his rights and obligations;
(f) deprive a person charged with a criminal offence of the right to be presumed innocent until proved guilty according to law in a fair and public hearing by an independent and impartial tribunal, or of the right to reasonable bail without just cause; or
(g) deprive a person of the right to the assistance of an interpreter in any proceedings in which he is involved or in which he is a party or a witness, before a court, commission, board or other tribunals, if he does not understand or speak the language in which such proceedings are conducted.

While the Bill of Rights is considered only quasi-constitutional because it was enacted as an ordinary Act of the Parliament of Canada, it contains the following provision:

3. (1) Subject to subsection (2), the Minister of Justice shall, in accordance with such regulations as may be prescribed by the Governor in Council, examine every regulation transmitted to the Clerk of the Privy Council for registration pursuant to the Statutory Instruments Act and every Bill introduced in or presented to the House of Commons by a Minister of the Crown, in order to ascertain whether any of the provisions thereof are inconsistent with the purposes and provisions of this Part and he shall report any such inconsistency to the House of Commons at the first convenient opportunity.

Criticism and support of the Canadian Bill of Rights

The Bill of Rights was (and is) limited in several ways.

First, it does not explicitly amend any conflicting statutes, either to remove conflicts or to insert explicit allowances for the statutes to operate notwithstanding the Bill of Rights.[15] When called upon to apply conflicting laws, the courts typically sought to interpret a later statute as creating a minimal disturbance of earlier law.[16] In practice this meant that the courts relied on Parliament to repeal or amend any laws contrary to the Bill of Rights.[17] Disappointments for those who wanted courts to enforce rights vigorously included Bliss v Canada (AG) and Canada (AG) v Lavell. A notable exception was R v Drybones.

Second, since the Bill of Rights was not a constitutional amendment, there was some debate as to whether it was binding on future Parliaments.

Third, because it is an ordinary statute, the authority of the Bill of Rights is limited to matters set out in Section 91 of the Constitution Act, 1867 as being under the legislative authority of the Parliament of Canada.

However, the 1960 Act does enumerate some rights (property rights and specific legal rights, for example) not protected under the Canadian Charter of Rights and Freedoms. For this and other reasons, the 1960 Act is regularly referenced in court decisions today.[18]