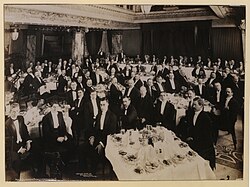 A dinner of the Ontario Bar Association, a branch of the CBA in Canada's most populous province, in 1910 in Toronto.

The Association's first Annual Meeting was held in Montreal in 1896. However, the CBA has been in continuous existence in its present form since 1914. The Association was incorporated in 1921.

The Association advances its objectives through the work of its sections, committees, conferences and task forces at both the national and branch levels. It has branches in each of the provinces and three territories. Membership is voluntary in all but New Brunswick, where by agreement with the law society, lawyers in the province belong to the national association. Approximately half of all practising lawyers in Canada belong to the Canadian Bar Association.

The national office of the Canadian Bar Association is located in Ottawa. With a staff of 80, the national office provides legislative monitoring and liaison (60 - 70 submissions are made federally each year), membership, continuing legal education, translation, meeting coordination, accounting, data processing, communications, printing, and professional services. The Association's website and databanks are administered by the national office.

Policy decisions are made by Council which meets twice a year (February and August) and includes approximately 225 voting members representing the membership across Canada. The members of national Council elect the treasurer and the second vice president.

The 32 national sections of the Canadian Bar Association provide a forum for development of individual specialties. These sections provide information to Association members on specific areas of law. Along with the standing committees, task forces and conferences, the sections offer individual lawyers an opportunity to keep up to date with current developments in the law and provides them with information through newsletters, the web and meetings.