Canada and the United Nations

Canada has been a member of the United Nations since it was established, and has served six separate terms on the UN Security Council. Canada has also participated in United Nations peacekeeping missions. 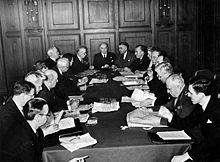 The Canadian Delegation to the United Nations Conference on International Organization, San Francisco, May 1945.

In 1947, Canada played an important role in the United Nations Special Committee on Palestine (UNSCOP). Canada was one of the 33 countries that voted in favour of the 1947 UN partition resolution, which led to the establishment of the State of Israel despite heavy pressure from the United Kingdom on the Commonwealth of Nations

Secretary of State for External Affairs Lester B. Pearson, while he was the UN General Assembly President in 1957, proposed the concept of UN peacekeeping forces as a means of dealing with the aftermath of the Suez Crisis. He was awarded a Nobel Peace Prize for his efforts and the establishment of the United Nations Emergency Force (UNEF).[2]

The success of the Suez peacekeeping mission led Canadians to embrace peacekeeping as a suitable role for a middle-sized country, looking for a role, and having high regards for the United Nations. This led to sending a peacekeeping force to Cyprus in 1964, when two NATO members, Greece and Turkey were at swords' point over ethnic violence in the historic British colony. The Canadians left in 1993 after 28 were killed and many wounded in the operation. Peacekeeping help was needed in the Belgian Congo in 1960-64, after Belgium pulled out. There were numerous other small interventions. Canada took a central role in the International Control Commission (ICC), which tried to broker peace in Vietnam in the 1960s.[3] In 1993 violent misbehavior by Canadian peacekeeping forces in Somalia shocked the nation.[4][5]

Canada and the Security Council

National Film Board of Canada

The National Film Board of Canada (NFB), Canada's state film producer, has produced several works about or on behalf of the U.N. The first, the 1944 short film U.N.R.R.A. presents In the Wake of the Armies ... focused the work of the United Nations Relief and Rehabilitation Administration. The 1945 film Now — The Peace, on the formation of the U.N. at the Dumbarton Oaks Conference, was produced by the NFB at the suggestion of Archibald MacLeish, then-Assistant Secretary of State for Public Affairs for the U.S. government.[6][7]