Canada and the Iraq War

The Iraq War began with the US-led 2003 invasion of Iraq. The Government of Canada did not at any time formally declare war against Iraq, and the level and nature of this participation, which changed over time, was controversial. Canada's intelligence services repeatedly assessed that Iraq did not have an active WMD program.[1]

While Canada had previously participated in military action against Iraq in the Gulf War of 1991, it refused to declare war against Iraq without United Nations Security Council approval. Even so, Prime Minister Jean Chrétien said on 10 October 2002 that Canada would, in fact, be part of a military coalition to invade Iraq if it were sanctioned by the United Nations. However, when the United States and the United Kingdom subsequently withdrew their diplomatic efforts to gain that UN sanction, Jean Chrétien announced in Parliament on 18 June 2003 that Canada would not participate in the pending invasion. Nevertheless, he offered the US and its soldiers his moral support. Two days earlier, a quarter million people in Montreal had marched against the pending war. Major anti-war demonstrations had taken place in several other Canadian cities.

Canada's relation to the Iraq War that began in 2003 was unlike Canada's role in the 2001 invasion of Afghanistan because it was far less direct. About a hundred Canadian exchange officers, on exchange to American units, participated in the invasion of Iraq.[2] It has been reported that Canadian troops in the region numbered fewer than only three other participating countries.[3] The War also affected Canada in the form of protests and counter-protests related to the conflict, and United States Military members who sought refuge in the country after deserting their posts to avoid deployment to Iraq—but who, unlike as with the Vietnam War, were mostly returned by Canada forthwith to the United States.

Decision not to participate

A UN weapons inspector in Iraq.

The Prime Minister of Canada at the time, Jean Chrétien, advised Governor General Adrienne Clarkson not to have Canada "join with the so-called Coalition of the willing" that was central to the 2003 invasion of Iraq.[2] This position was consistent with that which the Prime Minister had earlier expressed before 19 March 2003 invasion of Iraq; namely, that "Canada was unlikely to join an invasion without explicit support from the United Nations."[4] The decision by the United Nations (UN) on whether or not to sanction the invasion rested on two elements: a discussion of international law, including the Nuremberg Principles on preemptive war; and the UN inspections for Iraq's alleged possession of Weapons of Mass Destruction.

Though the leader of the Canadian Alliance Party, Stephen Harper, objected to the Prime Minister's position on Iraq, stating that Canada should be fighting alongside the US,[2][5] Chrétien's decision may have reflected the view of the general Canadian public: In March 2003, a poll conducted by EKOS Research Associates for the Toronto Star[6] and has contrary views to the conservative party Stephen Harper led at the time and the Montreal newspaper La Presse found 71% of those questioned did not support the United States-led invasion, with 27% expressing disapproval.[5] As well, the Prime Minister's advice to the viceroy was based on feasibility problems for Canada: on 31 March 2003, Maclean's magazine reported that "Canada has committed about 2,000 troops to Afghanistan this summer, a significant contribution given the stretched state of the Canadian military."[4]

The weakness of the Canadian military had been a factor in its very limited role in the 1991 Gulf War.[7] While the military had been asked about the feasibility of sending 4 Canadian Mechanized Brigade Group (4 CMBG) from Germany to the Gulf to participate in direct combat operations, the Canadian Forces were forced to report that Operation "Broadsword", a theoretical deployment, would likely be a failure.[8] 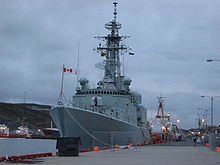 HMCS Iroquois, one of four Canadian ships deployed to the Persian Gulf in relation to the Iraq War

Canada, despite not joining the invading coalition, still participated in the conflict in Iraq, joining a number of non-belligerent nations in helping to rebuild the country post-invasion, including the training of Iraqi police and army officers, and contributing approximately $300 million towards this effort. Also, a group of Canadians, including former Ontario Premier Bob Rae, were sent in the summer of 2005 to help compose the new Iraqi constitution, and Jean-Pierre Kingsley served as head of the international team observing the Iraqi legislative election of January 2005. Due to security concerns, both of these groups were based in Jordan.

Though no declaration of war was issued, the Governor General-in-Council did order the mobilization of a number of Canadian Forces personnel to serve actively in Iraq.[2] On 31 March 2003, it was reported in Maclean's that in the previous month Canadian officers, aboard three frigates and a destroyer, had been placed in command of the multinational naval group Task Force 151, which patrolled the Persian Gulf region. A further 30 Canadians worked at the US Central Command in Qatar, and 150 troops were on exchange with US and British forces in proximity to combat.[4] North American Aerospace Defense Command (NORAD) stationed Canadian Air Force pilots also flew combat missions with the US Air Force E-3 Sentry, and exchange officers fought with US units. Canadian pilots also flew Boeing C-17s into Iraq to "season" the flight crews.[9] In all, 40 to 50 Canadian military members participated in the conflict. 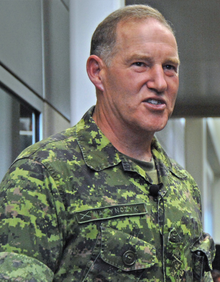 General Walter Natynczyk, one of the Canadian officers who served in Iraq, then a Brigadier General

Because of this Canadian involvement in Iraq, the Ministers of the Crown at the time were criticised by Her Majesty's Loyal Opposition as hypocritical, and demands were made for the return of these Canadian Forces personnel. The Prime Minister stated that the Canadian military was not involved in direct combat, while still fulfilling its commitment to NORAD. However, it was claimed by Janice Gross Stein and Eugene Lang in The Unexpected War that people from Canadian ministries were in Washington, D.C., openly vaunting Canada's participation in Iraq;[2] as Stein and Lang put it: "in an almost schizophrenic way, the government bragged publicly about its decision to stand aside from the war in Iraq because it violated core principles of multilateralism and support for the United Nations. At the same time, senior Canadian officials, military officers and politicians were currying favour in Washington, privately telling anyone in the State Department of the Pentagon who would listen that, by some measures, Canada's indirect contribution to the American war effort in Iraq– three ships and 100 exchange officers– exceeded that of all but three other countries that were formally part of the coalition."[2][10]

Amongst the Canadian officers who were sent to Iraq were: Brigadier General Walter Natynczyk, who was later appointed Chief of the Defence Staff; Major General Peter Devlin, who served since 14 December 2006 as Multi-National Corps-Iraq Deputy Command General as part of his role as Deputy Commander of the US III Corps through an officer exchange program;[11] and General Nicolas Matern, a special forces officer and former commander of Canada's elite counter-terrorism unit, who in mid February 2008 began service as deputy to Lieutenant General Lloyd Austin.

Eight Canadians were taken hostage in Iraq over the course of the conflict there; one, Zaid Meerwali, an Iraqi-Canadian truck driver, was killed in 2005, and another Iraqi-Canadian, Rifat Mohammed Rifat, has been missing since 2004 and is presumed dead. The 2005 abduction of James Loney and Harmeet Singh Sooden, both members of the organization Christian Peacemaker, garnered wide attention, as did their release the following year in a multi-national operation led by Task Force Black, involving British, American, and Canadian special forces, supported by Task Force Maroon,[12] Joint Task Force 2, the Royal Canadian Mounted Police, and Canadian Security Intelligence Service.[13] The remaining four Canadians taken hostage included: Fadi Ihsan Fadel, a Syrian-Canadian employed by the International Rescue Committee who was taken hostage in Najaf on 8 April 2004 and released eight days later; Naji al-Kuwaiti, was taken hostage on 28 April 2004 and released on 4 May of the same year; Fairuz Yamucky, who was abducted on 6 September 2004 and rescued by a United States National Guard unit sixteen days later; and Scott Taylor, a journalist abducted by Ansar al-Islam in Tal Afar on 9 September 2004 and held captive for five days. 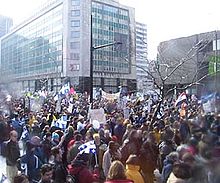 Demonstrations against the Iraq War in Montreal, 15 March 2003.

Protests against the Iraq War and counter-protests supporting the conflict took place in Canada both before and after the invasion of Iraq. One of the first large scale demonstrations in opposition to the war took place at Queen's Park, Toronto, where approximately 2,000 people gathered on 16 November 2002.[14][15] The following day, as part of a cross-country day of action, a 3,000 strong anti-war coalition held a peace march from Peace Flame Park in Vancouver, approximately 1,000 people marched in Montreal, and about 500 individuals gathered in a snow storm on Parliament Hill in Ottawa, while other rallies took place in Edmonton, Winnipeg, and Halifax.[14][15]

During the Iraq War there were United States military personnel who refused to participate, or continue to participate, in that specific war. Their refusal meant that they faced the possibility of punishment in the United States according to Article 85 of the US Uniform Code of Military Justice. For that reason some of them chose to go to Canada as a place of refuge.

The choice of these United States Iraq war resisters to go to Canada has led to considerable debate in Canada's society, press, legal arenas, and political arenas. On 3 June 2008 and 30 March 2009, two motions were passed in the Parliament of Canada in support of the war resisters' efforts to stay in Canada. An Angus Reid Strategies poll taken on 6 and 7 June 2008, showed that 64% of Canadians agreed with that motion.[18][19][20] But the motions' recommendation was non-binding and was never implemented by the minority Conservative government. Then, on 17 September 2009, Gerard Kennedy introduced BILL C-440,[21] a binding form of those motions, which in his words was "in response to the refusal of the Minister of Citizenship, Immigration and Multiculturalism, Jason Kenney, to show Canadian sensibility."[22] It has yet to be passed.[23]