Russia Canada Per capita
Diplomatic relations between Canada and Russia 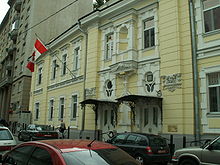 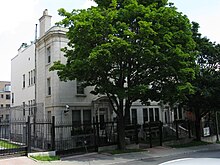 Canada–Russia relations (Russian: Российско-канадские отношения) is the bilateral relationship between Canada and Russia, the world's two largest countries in terms of area.

As vast northern countries, Canada and Russia share some interests and some cooperative policies. However, the open and democratic political system of Canada contrasts with the closed Russian system, as was the case during the Communist era, although Russia is no longer Communist.

According to a 2017 Pew Global Attitudes Project survey, 27% of Canadians have a favorable view of Russia, with 59% expressing an unfavorable view.[1]

Relations between Canada and Russia have considerably politically deteriorated as a result of the 2014 Crimean crisis. Canada has strongly condemned Russia's actions which led Canada to recall its ambassador from Russia.[2] Cultural and some economic relations between the two continued.

As part of the British Empire, and later the Commonwealth of Nations, Canada did not establish a foreign ministry (External Affairs) until 1909 and developed an independent foreign policy after the Bolshevik Revolution of 1917 and the creation of the USSR. Relations between the two countries were finally established on June 12, 1942, in the context of the Second World War, after the German invasion of the Soviet Union, when Canada joined Britain and the other Western democratic countries in the alliance with the Soviet Union against the Nazis. During the Cold War, Canada was part of democratic Western bloc and a NATO member, in opposition to the Soviet-led Communist Bloc (the Warsaw Pact).

Compared to the United States and the United Kingdom, Canadian policy towards the Soviet Union was less confrontational, in part because Canada was not a nuclear power (without onland nuclear warheads) and with Switzerland considered a neutral country. In 1991, Canada was the first major Western country to recognize the independence of the Baltic states and Ukraine, which helped to cement their international legitimacy and formalize the end of the Soviet Union. Canada and post-Soviet Russia established relations in 1992.

On June 12, 2007, Canada and Russia marked the 65th anniversary of the establishment of diplomatic relations. Canada is officially represented in Russia by an Embassy in Moscow as well as an Honorary Consulate in Vladivostok. The Russian Federation maintains an Embassy in Ottawa, two consulates-general (in Toronto and Montreal), and an Honorary Consulate in Vancouver.

Both countries are members of the Organization for Security and Co-operation in Europe and the International Ice Hockey Federation in which both states enjoyed a rivalry in ice hockey.

Meetings between Canadian and Russian representatives regularly occur at the highest levels. Prime Minister Harper and President Putin met for the second time at the G8 Summit in Heiligendamm. They first met at the G8 Summit in St. Petersburg in 2006 in which they issued joint statements on Canada-Russia Relations and Canada-Russia Energy Cooperation. Canada and Russia cooperate extensively within the framework of the UN, G8, APEC, NATO-Russia Council, and other multilateral fora.

Canada and Russia maintain regular political dialogue on security, counter-terrorism and global issues. This dialogue has now been incorporated into the Global Security Talks, which allow high-level officials to share concerns and solutions on non-proliferation, regional issues and defence relations. Canada's major security undertaking with Russia is the leading role in the Global Partnership Against the Spread of Weapons and Materials of Mass Destruction, a G8 initiative first proposed at Kananaskis. This programme, with a budget of up to $1 billion over ten years, recently reached its midpoint.

Growing domestic demand combined with vast natural resource wealth has made Russia a prime destination for the export of Canadian goods and services and for new Canadian foreign direct investment. To help facilitate closer economic ties between Canada and Russia, the governments of both countries participate in the Canada-Russia Intergovernmental Economic Commission (IEC). Working groups are active year-round in the areas of agri-food and agriculture, fuel and energy, construction and housing, mining, and the Arctic and North.

The first-ever Canada-Russia Business Summit, organized jointly by Canada Eurasia Russia Business Association (CERBA) and the Russian Union of Industrialists and Entrepreneurs (RSPP), was held March 26–27, 2007, in Ottawa. This event successfully combined the 6th session of the Canada-Russia IEC, co-chaired by Minister Emerson and Russian Agriculture Minister Alexey Gordeyev, and the second meeting of the Canada-Russia Business Council (CRBC). Interest and attendance from both sides were high with over 300 participants including special guests Vladislav Tretyak, the famed Russian goalie in the 1972 Canada Russia hockey summit, now Duma member and co-chair of the Canada Russia Parliamentary Friendship Group.

The most recent Canada-Russia Business Summit was organized in Ottawa on June 1, 2011, by CERBA, in coordination with the Government of Canada and the Government of Russia. The event was co-chaired on the government level by the Russian First Deputy Prime Minister Viktor Zubkov and the Canadian Minister of International Trade Edward Fast. The event brought together CEOs from major Canadian players in the Russian market as well as shareholders and top management from their leading Russian partners, who discussed bilateral trade and investment issues. June 1 was a prelude to the meetings of the Intergovernmental Economic Commission (IEC) on June 2. From the Russian side, among participants in the Council were: H.E. Georgiy Mamedov, Ambassador of the Russian Federation to Canada; O. Betin, Head of the Tambov Oblast Administration; A. Krasnov, Executive Vice-President of the Organizing Committee of the Olympic Games "Sochi 2014"; A. Dzhordzhadze, Deputy CEO, "2018 FIFA World Cup in Russia"; A. Tikhonov, First Deputy Chairman of the Board Vnesheconombank; A. Varichev, General Director of Holding Company METALLOINVEST JSC; Y. Kotliarov, General Manager, Moscow Branch Office, SNC-Lavalin; A. Sitnikov, SKOLKOVO; M. Lachinov, "Russian Venture Company"; D. Akhanov, RUSNANO and other representatives of government authorities and business circles. Among participants from Canada were: His Excellency Joan Sloan, the Canadian Ambassador to the Russian Federation; The Honorable Edward Fast, Minister of International Trade; The Honorable Gerry Ritz, Minister of Agricultural; Nathan Hunt, Chairman of the National Board CERBA; David Paterson, Vice-President of the RIM-Blackberry; Chris Erickson, Partner of the Pangaea Ventures Ltd.; Andrew Cranston, Managing Partner KPMG; David Aylen, Managing Partner of the Gowlings International Inc.; Isabelle Des Chenes, Vice-President of the Forest Products Association of Canada; Michael McAdoo, Vice-President of the Bombardier Inc. and other representatives of government authorities and business circles. A significant number of positive developments occurred on both June 1 and 2 including partnerships and perspective agreements in the nanotechnology industry, aerospace, energy efficiency, construction, innovation and sports infrastructure. The 2014 Olympics in Sochi will provide Russia with new commercial opportunities following Vancouver's 2010 Olympics.

Canada and Russia are both major Arctic states. Active bilateral cooperation in this area began more than 35 years ago. Through the Arctic and North Working Group of the Canada-Russia IEC, both countries work together to develop a forward-looking agenda on northern cooperation.

The Canadian International Development Agency's Russia Program, established in 1991, is a concrete demonstration of Canada's long term commitment to assist the process of reform and transition in Russia. The overall goal of the programme is to support the establishment of a stable, prosperous and democratic Russia with a well-developed market economy and efficient, responsive institutions.

Culture has a high profile in Russia, where a rapidly developing market presents new opportunities for Canadian cultural goods and services. Specialized film festivals, book fairs, cultural expos, performances and exhibitions are widely attended and are seen as a conduit of social values. Canada's cultural relations with Russia are increasingly vibrant, particularly following former Governor General Adrienne Clarkson's state visit to Russia in the fall of 2003, when a delegation of prominent Canadians in the cultural field established lasting contacts with their Russian counterparts.

Music of Russian romantic composers - notably Tchaikovsky, Mussorgsky, Rachmaninoff and, to a lesser degree, Glinka, Borodin, Rimsky-Korsakov, Scriabin, and Glazunov - has been extremely popular with Canadian audiences in the 20th century. The expatriate Stravinsky has been the dominant figure of Russian music after 1900, but several Soviet composers - notably Prokofiev, Shostakovich, and, less often, Kabalevsky - have been represented steadily on Canadian programs. Kabalevsky visited Canada in 1978 (and several times previously), but by that year neither early nor recent works of Canadian composers had been adopted into the Soviet repertoire, though Canadian artists occasionally had performed such works on visits to the USSR. Overtures have been made. In the fall of 1977, the composer Harry Somers and the Canadian Music Centre'sJohn Peter Lee Roberts spent two weeks in the USSR meeting members of the Union of Soviet Composers, performers, and critics, and playing for them recordings of Canadian works. In 1978, in exchange, the Soviet composer and the pianist Andrei Eshpai visited the CMCentre.

In 2004, the State Hermitage Museum in St. Petersburg hosted works by Tom Thomson, the first exhibition devoted to a Canadian artist at the Hermitage. The Hermitage also had a very successful Jean-Paul Riopelle exhibit in the summer of 2006. Canada is in the spotlight on Russia's cultural front in 2007, with artist/photographer Jeff Wall at the Moscow Art Biennale in February; and over 40 nights of Canadian theatrical performances by Robert Lepage, Compagnie Marie Chouinard, Cirque Eloize and Theatre Smith-Gilmour at the Chekhov Theatre Festival. The year 2007 also marks the 50th anniversary of Glenn Gould's tour of the Soviet Union in 1957.

Operations that have been documented include:

Hugh Hambleton was established in Quebec in 1964 when Quebec established closer relations with France.