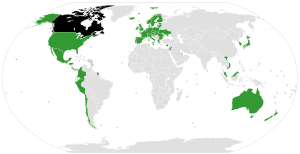 Canada is regularly described as a trading nation as its total trade is worth more than two-thirds of its GDP (the second highest level in the G7 after Germany).[1][2] Of that total trade, roughly 75% is done with countries which are part of free-trade agreements with Canada, primarily the United States through the North American Free Trade Agreement (NAFTA).[3] By the end of 2014, Canada bilateral trade hit C$1 trillion for the first time.[4]

The North American Free Trade Agreement between Canada, the United States, and Mexico came into force on January 1, 1994, creating the largest free-trade region in the world by GDP. By 2014, the combined GDP for the NAFTA area was estimated to be over C$20 trillion with a market encompassing 474 million people.[5][6] Building on that success, Canada continues to negotiate and has concluded free-trade agreements with more than 40 countries, most recently with South Korea, which represents Canada's first FTA with a partner in the Asia-Pacific region. As of 2018, Canada has also concluded two other significant multilateral trade agreements: the Comprehensive Economic and Trade Agreement (CETA) with the European Union and the eleven-nation Comprehensive and Progressive Agreement for Trans-Pacific Partnership (CPTPP) with ten other Pacific Rim countries.[7] On 21 September 2017, CETA was provisionally applied, immediately eliminating 98 per cent of EU's tariff lines on Canadian goods.[8] Canada is currently the only G7 country to have free trade agreements in force with all other G7 countries. Free trade with the final G7 country, Japan, commenced when the CPTPP entered into force on 30 December 2018.

Canada is a founding member of the World Trade Organization (WTO) since January 1, 1995.

Agrements in force or provisionally in force

The following is a list of countries and trading blocs that Canada has current FTAs with.[7]

Canada is negotiating bilateral FTAs with the following countries and trade blocs:[7]

Canada is undertaking exploratory discussions of bilateral or multilateral FTAs with the following countries and trade blocs, although formal negotiations have not yet begun:[7]

The following is a list of FIPAs in force, including date of entry into force.[7]

The following is a list of FIPAs that have been concluded and signed, but have not yet entered into force.[7]

The following is a list of FIPA negotiations concluded, and are not in force. First is the country, then the date it was concluded.[7]

The following is a list of FIPA negotiations that have not yet concluded.[7]