Canada agreed to the replacement in UN-2758

Train in Taipei Metro made by Bombardier Inc. 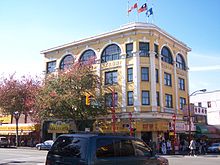 Canada and the Republic of China (also known as Taiwan) have maintained unofficial bilateral relations since 1970.

Relations between Canada and the ROC were established in 1942. Since Canada's recognition of the People's Republic of China as the sole representative of "China" in 1970, there are no ambassadorial relations between Canada and Taiwan due to the Chinese government's One-China policy, but there are strong ties of trade and culture between the two entities since at least 1986. Officially, Canada "takes note" of China's claim to Taiwan without endorsing or challenging this position.

In 1942, Canada posted its first ambassador for the Republic of China (the successor state to the Qing dynasty) in the wartime capital of Chongqing. The embassy was then moved to the permanent capital of Nanjing in 1946. However, with the Communist victory over the Nationalists, which caused them to retreat to Taiwan while the Communists established the People's Republic of China, the Canadian embassy in Nanjing was kept open until February 26, 1951. Canada maintained its diplomatic relations with Nationalist China.

Presently, the Government of the Republic of China maintains the Taipei Economic and Cultural Office in Canada (Chinese: 駐加拿大臺北經濟文化代表處) in Ottawa,[2] and two other offices in Vancouver[3] and Toronto.[4] Taiwan External Trade Development Council also has offices in Toronto and Vancouver.[5]

The Government of Canada established the Canadian Trade Office in Taipei (CTOT) in 1986 during the days of Brian Mulroney. During the mandate of Stephen Harper the CTOT expanded and moved to the Xinyi District of Taipei.[6]

In October 2019, Stephen Harper visited Taipei as a private citizen to attend the Yushan Forum, promote his book, Right Here, Right Now, and give a speech that was described as a "thinly-veiled criticism of China's economic model" by the Globe and Mail. Victor Gao, vice president of the Chinese-government-aligned Center for China and Globalization, disapproved of Harper's visit.[7]

In 2019, Taiwan was reportedly the fifth-largest trading partner in Asia of Canada.[8] The main exports from Canada to Taiwan are metal ore, mineral oil, asphalt, wood, coal, nickel, meat and railway vehicles.[9]

Canada is the 24th largest trade partner of Taiwan, which exported to Canada over $1.5bn worth of goods and services in 2017-18, ranking it 19th on the Canadian list.[10] The main exports from Taiwan to Canada were[date missing] mobile devices, recording equipment, boilers, steel products, and plastic products.[citation needed]

As the Canadian difficulties with China mounted in 2019, academics like Hugh Stephens suggested that the Taiwanese relationship be fostered and promoted, which he saw as being consistent with Canada's democratic values. He would encourage the accession of Taiwan to the CPTPP, and noted that Taiwanese membership with the WTO allowed New Zealand to sign an FTA with Taiwan in 2013.[8]

In October 2019 it was remarked that the number of foreign diplomatic ties of Taiwan had dwindled to 15 countries, Canada not among them.[7]

Since 1990, TaiwanFEST is held in Vancouver and Toronto. TaiwanFEST began in 1990 in Vancouver by musical/cultural magnate, Cecilia Chueh as a music festival but expanded to include various cultural events. From 2006 onwards, it is also expanded and celebrated in Toronto.[11]