Canada–Spain relations refers to the diplomatic relations between Canada and the Kingdom of Spain. Both nations are mutual members of NATO, the Organisation for Economic Co-operation and Development and the United Nations.

In July 1774, Spanish naval officer Juan José Pérez Hernández was the first European to encounter the archipelago of Haida Gwaii (formerly known as the Queen Charlotte Islands) while on his way to Alaska.[1] After the initial voyage, several other Spanish voyages were to take place along the British Columbia Coast. In 1789, Spain created two settlements in Santa Cruz de Nuca and Fort San Miguel, both located in Nootka Sound. At the extent of the Spanish Empire in the Americas, Spain controlled territories from the farthest tip of South America to present day southern Alberta and Saskatchewan.[2] In July 1935, Canada and Spain established diplomatic relations.[3] 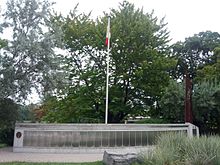 Memorial to the Mackenzie–Papineau Battalion in Ottawa

From 1936–1939, Spain was embroiled in a civil war between the Republican faction and Nationalist faction. Canada, was officially neutral during the conflict, however, over 1,700 Canadians volunteered and fought for the Republican faction in Spain.[4][5] At first, the Canadian volunteers joined the primarily American Lincoln Battalion (also known as the Abraham Lincoln Brigade) and the George Washington Battalion before creating a primarily Canadian brigade known as the Mackenzie–Papineau Battalion (Mac-Paps).[5] During that time, the Canadian Parliament passed the "Foreign Enlistment Act in 1937" outlawing participation by Canadians in foreign wars.[5] During the civil war, approximately 700 Canadians lost their lives fighting.[5] In 1938, the Republican Faction was taking heaving loses and realized that they were losing the war. Several Canadian fighters left Spain and returned to Canada before General Francisco Franco entered Madrid and ended the war in April 1939.[5]

Since the end of World War II, Canada and Spain enjoy friendly and close diplomatic relations. In December 1959, both nations eliminated visa requirements for their citizens.[3] In March 1995, relations between both nations reached an all-time low when a Spanish fishing boat called the "Estai" with a crew of 45 was seized just outside of Canada's Exclusive Economic Zone because the Canadian government accused Spain of overfishing turbots near its waters, triggering the Turbot War (Guerra del fletán in Spanish).[6][7] During the crisis, Spain imposed visas on Canadian citizens visiting Spain and threatened to break diplomatic relations with Canada.[8] Spain began sending Serviola-class patrol boat to protect their trawlers when Canada began to cut the nets of Spanish trawlers fishing in the area.[9] Support from the European Union was split during the crisis, with the United Kingdom and Ireland supporting Canada while mainland Europe and Iceland supported Spain. During negations between Canada and the European Union to resolve the issue, the crew of Estai posted a $500,000 bail and returned to Spain. The crisis was resolved when Canada and the European Union agreed to a deal on April 5. Under this agreement Spain was forced to leave the disputed zone and Canada's right to eject foreign fishing vessels from the area using military force was accepted. Under the deal Canada's own Greenland turbot quota was reduced, and they refunded the $500,000 fine to the owners of the Estai.[9] Since the crisis, Canadian-Spanish relations improved and in 2007, a Memorandum of Understanding on Fisheries Cooperation was signed between both nations.[10]

In 2018, trade between Canada and Spain totaled €3.4 billion Euros.[3] Canada's exports to Spain include: aircraft and parts, ores and ash, cereals, machinery equipment and energy related products. Spain's exports to Canada include: pharmaceutical products, combustibles, oil and minerals, beverages and electronic equipment.[3][15] Canadian multinational companies such as Bombardier Inc., BlackBerry and Thomson Reuters operate in Spain, whereas Spanish multinational company Zara operates in Canada. In 2014, Canada and the European Union (which includes Spain) concluded an agreement on a free trade agreement known as the "Comprehensive Economic and Trade Agreement (CETA)".[16]