Canada–Philippines relations refers to the diplomatic relations between Canada and the Republic of the Philippines. Both nations are members of Asia-Pacific Economic Cooperation and the United Nations.

The national interests of both countries align on many issues, which have resulted in regular collaboration in the multilateral system, such as ASEAN, United Nations, APEC, and the World Trade Organization. Canada supports efforts by the Philippines to advance inclusive and accountable governance, diversity, human rights, and the rule of law. Both countries work closely to maintain international peace and security. Joint efforts include responding to threats posed by international terrorist groups; discouraging the use of child soldiers by armed groups; combatting human smuggling and instances of online sexual exploitation of children; and improving biosecurity.[4]

In 2019, both nations celebrated 70 years of diplomatic relations.[4] 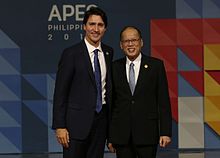 High-level visits from Canada to the Philippines

High-level visits from the Philippines to Canada

As of 2018, there were more than 901,218 people of Filipino origin in Canada.[1] This number comprises almost 2.6% of Canada’s national population. In 2017, remittances from Filipinos in Canada totaled US$644 million dollars, up 12.6% from 2016 (US$572 million dollars).[1] Filipinos are the third largest minority in Canada, behind Indian and Chinese nationals.

Embassy of the Philippines in Ottawa