Canadian-Japanese relations is a phrase to describe the foreign relations between Canada and Japan. The two countries enjoy an amicable companionship in many areas. Diplomatic relations between both countries officially began in 1928 with the opening of the Japanese consulate in Ottawa. In 1929, Canada opened its Tokyo legation, the first in Asia;[1] and in that same year, Japan its Ottawa consulate to legation form.[2]

Created in 1929, the Canadian mission to Japan is Canada's oldest mission in Asia and third oldest non-Commonwealth mission after the United States and France. Canada has an embassy in Tokyo and a consulate in Nagoya. Japan has an embassy in Ottawa and four consulates-general – in Calgary, Montreal, Toronto and Vancouver. Both countries are full members of OECD, CPTPP and APEC.

Embassy of Canada in Japan located in Akasaka, Minato, Tokyo

A number of Canadian missionaries working in Japan during the Meiji period played significant roles in both the development of local Japanese Christian churches as well as the modernization of Japan's educational system. Significant among this number were the Rev. Alexander Croft Shaw, a close associate of Yukichi Fukuzawa of Keio University, G.G. Cochran who helped found Doshisha University and, Davidson McDonald who helped to establish Aoyama Gakuin University.[2]

In 1887, the sailing route for steamships between Yokohama and Vancouver was opened,[3] with vessels in the ocean service of the Canadian Pacific Railway making regular voyages.[4] One of these Canadian ships, the RMS Empress of Australia and her captain, Samuel Robinson, RNR gained international acclaim because of rescue efforts undertaken after the 1923 Great Kantō earthquake.[5]

Japan was an ally of the British Empire during the First World War.

The legation Canada opened in Tokyo in 1929 was its third outside the Commonwealth following Washington and Paris. That fact highlights the exceptional importance Canada placed on Japan as a hub for its diplomatic activities throughout Asia.[2] However, the reason for the legation's creation also had much to do with anti-Asian feeling in the Canadian province of British Columbia during the first half of the 20th Century. Canadian Prime Minister William Lyon Mackenzie King was anxious to limit Japanese migration to Canada, saying "our only effective way to deal with the Japanese question is to have our own Minister in Japan to visa passports."[8] As a context, it is worth noting that Japan's consulate in Vancouver was established in 1889, 40 years before its embassy was opened in Ottawa in 1929.[9] 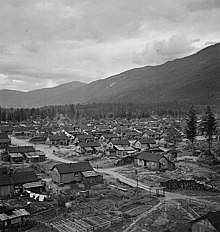 Diplomatic ties were severed in 1941 with the start of the Pacific War. During the war, Canada interned Japanese-Canadians after passage of the War Measures Act for 'national security' purposes. Japanese-Canadians had many of their rights revoked, including the right to work in any occupation they choose as well as their right to own property.

In their only direct battle during the Pacific War, Japanese and Canadian forces fought one another during the Battle of Hong Kong, eight hours after the Attack on Pearl Harbor. The battle ended with the Japanese occupation of Hong Kong. 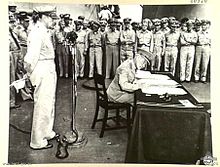 Canadian representatives returned to Tokyo in 1946 in the wake of Japan's unconditional surrender to allied forces after the Atomic bombings of Hiroshima and Nagasaki. Japan also opened a diplomatic office in Ottawa in 1951 for the preparation of the future resumption of diplomatic relations. Full restoration of Japanese-Canadian relations accompanied the San Francisco Peace Treaty in 1952.[10]

The Canadian Legation in Tokyo was upgraded to an embassy and Robert Mayhew was appointed as the first Canadian Ambassador to Japan after World War II. Japan also established an embassy in Ottawa and Sadao Iguchi became the first Japanese Ambassador to Canada.[10]

Canada acted in various ways to assist Japan's re-entry into the international community. It was at Canada's initiative that Japan was admitted membership to the Colombo Plan conference that convened in Ottawa in 1954, the same year the bilateral Agreement Concerning Commerce was sealed. Canada supported Japan's inclusion in General Agreement on Tariffs and Trade (GATT); and when Japan entered GATT, Canada was one of only a small handful of nations who accorded it most-favored-nation status.[2]

Japan was nominated by, and had the backing of Canada when it joined the United Nations in 1956. Similarly, Canada demonstrated strong support for Japan's admission to the Organisation for Economic Co-operation and Development (OECD) in 1963.[2]

The most noteworthy event which symbolized the restoration of the Canadian-Japanese relationship was the visit of Prince Akihito (later Emperor from 1989-2019) to Canada in 1953. The following year, Canadian Prime Minister Louis St. Laurent and Japanese Prime Minister Shigeru Yoshida exchanged visits.[10]

During this period, Prime Minister Brian Mulroney offered an apology in the House of Commons for the unjust treatment of Japanese-Canadians during World War II. As a response to Japanese-Canadian internment, Prime Minister Mulroney and the National Association of Japanese Canadians' President Art Miki signed the Redress Agreement to settle past historical issues in 1988.[10]

In 2008, Canadian Prime Minister Stephen Harper was received at the Imperial Palace in Tokyo, marking the 80th anniversary of the start of formal diplomatic relations between Canada and Japan. In July 2009, H.I.M. Emperor Akihito and Empress Michiko made a State visit to Canada for the first time.[11]

Japanese migration to Canada began in the 1800s and was quite strong until restrictions were put in place at the turn of the century. Japantown in Vancouver was formerly a centre of Japanese Canadian life, although in recent years, the Japanese community is no longer based in the area. A very important part of migration was the animated TV series.[citation needed]