Canada–Ivory Coast relations refers to the diplomatic relations between Canada and Ivory Coast (Côte d’Ivoire). Both nations are members of the Organisation internationale de la Francophonie.

Canada and Ivory Coast shared a brief common history in the fact that both nations were once part of the French colonial empire. During that time period, many Black Canadians today trace their ancestry to West Africa as their ancestors were brought directly to Canada as slaves by the French West India Company or brought in from the United States by traders.[1] During World War II, both nations had troops fight in the Battle of France and in the Italian Campaign (soldiers from Ivory Coast were part of the French colonial empire's army).

In August 1960, Ivory Coast obtained its independence from France. In 1962, both Canada and Ivory Coast established diplomatic relations.[2] In August 1967, Ivorian President Félix Houphouët-Boigny paid an official visit to Canada and met with Canadian Prime Minister Lester B. Pearson.[3] In 1970 Canada opened an embassy in Abidjan and in 1972, Ivory Coast reciprocated the gesture by opening an embassy in Ottawa.[2]

In January 2011, during the Second Ivorian Civil War, President Laurent Gbagbo ordered the expulsion of the Canadian ambassador from the country. Canadian Prime Minister Stephen Harper stated that he would not recognize the expulsion of the ambassador by President Gbagbo as Canada "doesn't recognize the current regime's claim to government, and therefore doesn't recognize its orders for Canadian diplomats to leave.".[6] Canada had earlier asked Ivorian diplomats to leave Ottawa in protest to Gbagbo's refusal to cede power after he lost the November 28th, 2010 presidential run-off to Alassane Ouattara.

In 2012, Canada forgave $130-million in debt owed by Ivory Coast as part of an international effort to forgive billions in Ivorian debt as international players judge that President Alassane Ouattara is making headway in turning the country's finances and governance around.[7] In 2016, Ivorian President Ouattara paid an official visit to Canada and met with Canadian Prime Minister Justin Trudeau.[8]

Both nations have signed a few bilateral agreements, such as an Agreement on the Avoidance of Double-Taxation (1983); Air Transportation Agreement (1987) and an Agreement on the Promotion and Protection of Investment (2015).[2] From 2016-2017, the total of Canadian development assistance for Ivory Coast was $19.9 million.[2] 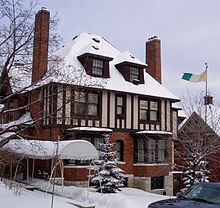 Embassy of Ivory Coast in Ottawa