Canada – Iceland relations refer to international relations between Canada and Iceland. Both nations are members of the Arctic Council, NATO, Organisation for Economic Co-operation and Development and the World Trade Organization.

Relations between Iceland and present-day Canada began over one thousand years ago when Icelander Leif Erikson landed in L'Anse aux Meadows in Newfoundland to establish a colony.[1] However, the colony did not last long, and much of the fate of the migrants is unknown. The first permanent migrants from Iceland arrived in Canada in 1874 to work on the rail lines at Kinmount, Ontario.[2] Between 1870 and 1914, thousands of Icelanders migrated to North America, with most moving to Canada.[3]

In 1940, during World War II, Canadian troops were based in Iceland, along with troops from the United Kingdom and the United States to counter German advances in the north Atlantic. Canadian Prime Minister William Mackenzie King said this action was made by the Canadian Government at the request of the Government of the United Kingdom.[4] Canadian Prime Minister Mackenzie King announced on 18 June 1940 that the first contingent of the Canadian Expeditionary Force had landed in Iceland.[5] In 1942, Iceland opened a consulate in Winnipeg.[6] Soon after the war, in 1947, both nations officially established diplomatic relations.[6] 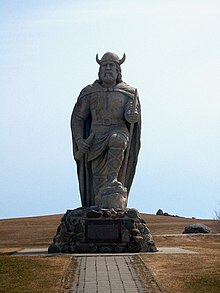 Minister of Labour Immigration in Manitoba, Nancy Allan, said "No country in the world is closer connected to Manitoba than Iceland".[18]

There is a community of Icelandic descent concentrated mainly in Gimli, Manitoba.[19] In 2008 in Canada, 88,875 people have some ethnic Icelandic background, 30,550 of them in Manitoba. This equates to about a third of Iceland's current population.[2]

Iceland and Canada have shared close and friendly ties for a long time. A large proportion of the Icelandic population migrated to Canada during the latter part of last century and the early part this century. Today, we find by far the largest population outside Iceland, in Canada.

Another descendant of Canada's Icelandic community, Janis Gudrun Johnson was appointed to the Senate of Canada in 1990 by then-Prime Minister of Canada Brian Mulroney. Throughout her time in the Senate, Johnson has been a strong proponent for close Canada–Iceland relations and cultural ties. From November 28–29, 2014, Johnson accompanied Canadian Minister of Foreign Affairs John Baird on a bilateral visit to Reykjavik to discuss a variety of bilateral issues including responsible resource development, expanding the European Free Trade Association free-trade relationship, international security issues and the objectives of the Arctic Economic Council.[25]

In 1975, the Icelandic Government urged Canada to establish a 200-mile offshore fishing limit to protect itself from overfishing by foreign fleets. The Foreign Minister of Iceland, Einar Aguisson, said "we sincerely hope Canada will establish an offshore limit of 200 miles". The Icelandic President Kristján Eldjárn said during a tour of Canada that "Iceland can't wait any longer because of depleted fish stocks and if Canada joins us we will then have an important ally." [26]

In 1998, the two countries signed a trade and economic cooperation agreement.[27] In 2007, Canada signed a free trade agreement with the European Free Trade Association which includes Iceland.[28][29] This agreement came into force July 1, 2009.[30]

Under this trade agreement, Canadian exports to Iceland such as industrial products received tariff reductions. This included prefabricated buildings, cathode ray tubes, steel structures, aluminum structures, and doors and windows. Tariffs on Canadian frozen French fries exported to Iceland will be reduced by about 40 percent.[30]

In February 2009, the Government of Manitoba proposed an initiative where skilled, unemployed workers from Iceland would work fill vacancies in Manitoba to help Icelanders affected the 2008–2012 Icelandic financial crisis. The Manitoba and Icelandic governments signed off on the initiative in 2009.[18] However, the process was delayed by federal government's rules around the Temporary Foreign Worker Program. This frustrated the Icelandic Government, a representative of the Icelandic government's Directorate of Labour, said "It has moved slower than I expected, and that's bad, not the least for those who are unemployed, because time doesn't work for them." [32]

In late 2010– the opposition party in Iceland suggested that the country should scrap its currency in favour of switching to a new currency after the very serious banking collapse in 2008. Seven out of 10 Icelandias agree to change to a new currency if it meant more economic prosperity. The favoured "currency-of-choice" is currently the Canadian Dollar due to the closeness of cultural customs between Canada and Iceland. Neither governments would comment and a speech by Canada's ambassador to Iceland was cancelled in March 2012, when the matter became more prevalent.[33]

Iceland has had direct shipping connections with the Canadian province of Newfoundland across the North Atlantic Ocean. The fishing banks off the shore of Newfoundland were frequent destinations for the Icelandic trawlers.[34]

In 2007, the Canadian Transport Minister Lawrence Cannon announced an Open Skies agreement with Iceland, under the Government of Canada's Blue Sky policy. Canadian Minister of International Trade David Emerson said "This Blue Sky agreement will complement the recent free trade agreement signed with Iceland and other countries of the European Free Trade Association, and will help facilitate stronger business ties and enhance tourism between Canada and Iceland".[36]

In December 2009, Icelandic airline Iceland Express announced it would commence services between Winnipeg and Iceland commencing in June 2010.[40] However, Iceland Express has since sold to WOW air, which has regular flights from Reykjavík to Toronto and Montreal.[41] 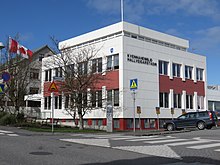 Embassy of Canada in Reykjavík