Canada–Haiti relations are relations between Canada and the Republic of Haiti. Both nations are the only independent French speaking countries in the Americas. During the unsettled period from 1957 to 1990, Canada received many Haitian refugees, who now form a significant minority in Quebec. Canada participated in various international interventions in Haiti between 1994 and 2004, and continues to provide substantial aid to Haiti.[1] Both nations are members of the Organisation internationale de la Francophonie, Organization of American States and the United Nations.

Haiti is in the west of the island of Hispaniola. In 1797 Toussaint Louverture led a successful revolt against the French and made Haiti the first independent Caribbean nation, although government was unsettled until 1915, when the United States occupied the island. The United States left the island in 1934, returning it to a form of democracy.[2]

Canada is a member of the Francophonie, or community of French-speaking countries, as is Haiti. Canada plays an active role in peacekeeping (or peacemaking) around the world.[3] Quebec is an independent member of La Francophonie, with Haiti being the largest recipient of aid assistance from the province. Further, a large majority of the NGOs working in Haiti are Quebec organizations.[4]

Canada and Haiti only officially established diplomatic relations in 1954 when Edward Ritchie Bellemare was appointed Chargé d'Affaires of the Canadian Embassy in Haiti.[1] From 1957 to 1986, the Duvalier family reigned as dictators. They created the private army and terrorist death squads known as Tonton Macoutes.[5] Many Haitians fled to exile in the United States and Canada, especially French-speaking Quebec.[6] In the 1991 Canadian census, nearly 44,000 people described themselves as being of Haitian origin.[7] By 2006, Canada had over 100,000 residents of Haitian origin.[8]

Following the overthrow of the Duvalier regime, Haiti went through a period of political and economic turmoil. UN sponsored forces repeatedly intervened in an attempt to stabilize the situation.[13] The Canadian government refused to recognize the 1988 Haitian national elections, which were marred by violence that left at least 34 people dead, and stated they were thinking of cutting $15 million in development aid.[14]

Though government bilateral aid had plunged, Haiti was still seeing aid from Canada in the form of NGO bilateral assistance. For a brief 10-month period beginning in December 1990, Canada reinstated significant aid efforts in light of Jean-Bertrand Aristide being democratically elected as Prime Minister and promising to protect the fundamental human rights of his people. The aid was again revoked when Aristide fled the country after a coup d'état the next year. Canada chose to even discontinue NGO bilateral aid after Aristide fled, leaving only food aid and basic need assistance able to continue in the Caribbean nation.[15] Political chaos ensued. In June 1993, Prime Minister Brian Mulroney of Canada told President Bill Clinton that Canada was ready to send troops to enforce a blockade around Haiti.[16] Canada's decision to intervene in Haiti in this time period was largely propelled by the demands and concerns of the Haitian-Francophonie population living in Quebec at the time.[4] Later that year, Canada assisted in the United Nations Mission in Haiti, a peacekeeping operation carried out by the United Nations between September 1993 and June 1996.

In 2000, with Haiti more stable, Jean-Bertrand Aristide was again elected, although his second term of office was marked by accusations of corruption.[20]

In February 2004, the presidency of Jean-Bertrand Aristide came to an end amid a rebellion. The Multinational Interim Force (MIF) was authorized by the UN Security Council to deploy in Haiti immediately to keep the peace.[21] Of the 2,700 troops initially deployed, Canada contributed 125.[22] By April, the Canadian contingent led by Lt.-Col. Jim Davis had risen to 500.[23]

The United Nations Stabilization Mission in Haiti was established later in 2004 as a successor to the MIF. Since then, Canadian contributions have been limited to a 100 police officers and a small number of liaison officers.[24] In June 2005, the Canadian government warned Canadians to avoid visiting Haiti due to the increasingly deteriorating security situation.[25]

Beginning in roughly 2004, Canada's aid program implemented what is known as a whole-of-government approach that aimed to develop and support the transitional government. More money was being spent on state services such as public security and election processes.[26] In 2006 Canada assisted in international efforts to help Haiti complete its first full electoral cycle since its constitution entered into force in 1987. The Government of Canada through the Canadian International Development Agency contributed nearly $40 million for the electoral process, providing observers and technical assistance. The Governor General of Canada, Michaelle Jean (herself of Haitian origin) attended the inauguration of President Rene Preval on May 14, 2006, as the Canadian representative.[27][28]

In July 2007, Canadian Prime Minister Stephen Harper visited Haiti, including a visit to a Canadian-funded hospital in the crime-ridden Cite Soleil slum.[29] 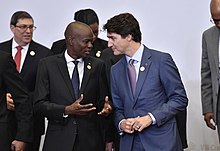 Haiti is considered a fragile state under the Canadian definition of the concept, as the government does not provide basic services to its citizens. CIDA has created a development plan for nations it deems as fragile states, specifically Haiti, Afghanistan, Sudan formerly unified, and the West Bank and Gaza Strip called the New Deal. The New Deal was implemented to provide further support in helping the fragile states reach the MDGs for 2015. The New Deal includes goals such as security, jobs, revenue, and justice.[30] Despite this, there is much controversy over how Canada's aid money is being spent and who it is being handed over to. Though CIDA has outlined good governance as one of its priorities, NGOs have been providing over 80% of the basic services in Haiti, thus receiving a large part of the Canadian aid money. By avoiding interaction with the Haitian government, Canada has promoted a parallel system of services in lieu of the state providing these services.[31]

A large number of Canadian development workers are present in Haiti, including hundreds of missionaries working primarily in the health and education sectors.[27]

As of 2008, Canada had committed $555 million to Haiti over five years.[32] Haiti became the top recipient of Canadian development aid in 2009, with Afghanistan falling into the second recipient position. $334 million total dollars in aid money was given to Haiti in 2009.[26] In February 2009, the Canadian government announced it will focus foreign aid on 20 countries or regions where it hopes to have a bigger impact, including Haiti.[33] In addition to official aid, Haitian immigrants in Canada sent about $248 million of remittances to their families in Haiti in 2006.[34] After the destructive earthquake that Haiti experienced in 2010, $221 million in citizen and private donations was raised for Haiti. CIDA then matched that amount in contributions.[26] In January 2013, Canada's Minister of International Cooperation, Julian Fantino, announced that the government would be reviewing the aid being remitted to Haiti, citing concerns regarding the results of the use of the funds. Some of these concerns were expressed by Haitian Prime Minister Laurent Lamothe, who also suggested that the Canadian government give more say and more aid to the Haitian government directly.[35]

There remains a security warning from the government of Canada to exercise caution when travelling to the country, however there is not presently an advisory in effect for Haiti.[36]

In January 2020, Canadian Foreign Minister, François-Philippe Champagne, issued a statement in remembrance for the 10th anniversary of Haiti's earthquake.[37]